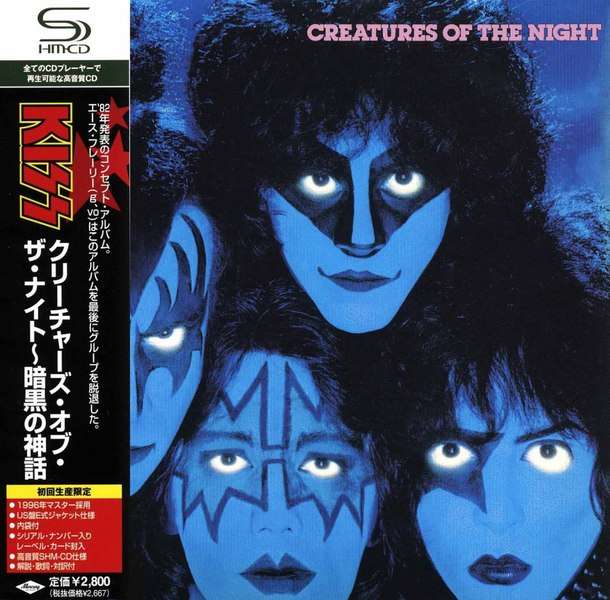 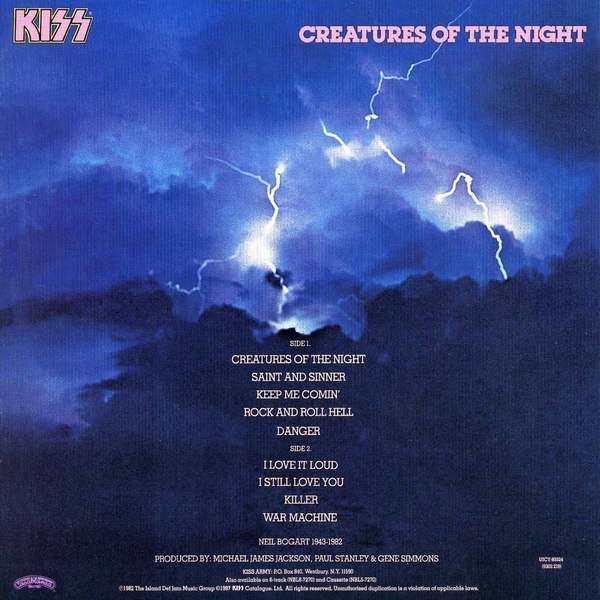 KISS in a remastered, Japanese release on SHM-CD, now the superb “Creatures Of The Night“, a Limited mini-LP replica numbered collector’s piece never re-printed, very hard to find.As extra, we added the 1985 Remix version of the title track, more ‘suited’ to the glammy sound of the era.For many fans, ‘Creatures Of The Night’ is the best KISS album ever. one heavy, over the top & loud album. Very very loud. Hot on the heels of The Elder and Killers, Creatures was a defiant “we’re back!” from a band who was written off by the end of 1981.It is important to note that there are several versions of Creatures floating around. At one point in 1985, shortly after ‘Asylum’, it was reissued with new (non-makeup) cover art with Bruce Kulick instead of Ace Frehley.Interestingly, neither played on Creatures.The reissue with the non-makeup cover has the songs in a different order, and the title track was remixed to bring down the loudness of the drums and make it a radio suitable single.“Creatures Of The Night” really is a stellar hard rock album featuring songwriting by Bryan Adams, Mikal Japp and a guy named Vincent Cusano, better known by his stage name Vinnie Vincent.Guitars were by Paul Stanley, Bob Kulick, Vincent, Rick Derringer, Steve Ferris, and who-knows-how-many-others. Kiss claim to have lost track due to the process of auditioning and recording at the same time.Eric Carr, who had no songwriting credits this time, played bass on Paul’s “I Still Love You”.And yeah, his drums are loud alright! They sound awesome, like John Bonham shooting cannons off the back of the stage. They are the cleanest, most powerful, natural and clear drum sounds this side of Led Zeppelin, and Kiss had a lot to be proud of. Just listen to “I Love It Loud”. Wow.“Creatures Of The Night” is an amazing fast paced opening, starting off with a barrage of Carr’s toms. I think The Elder was a disappointing way to introduce the new drummer. Creatures overcompensates, and I am sure Carr was very happy. The main riff and guitar lick in “Creatures” is driving and catchy, and the chorus will stay in your head for days. This is Kiss’ statement of purpose.Gene takes the tempo down a bit with “Saint & Sinner”, a rebellious one about standing your ground: “Get me off this carousel, you can do as you please, you can go to hell. Put my back against the wall, well, I’m not gonna fall on my knees, no, not at all.”At this point Gene was trying to sing in his low “monster” voice more, and this is such a great song. Shame it has not been resurrected live.“Keep Me Comin’” is a pretty self-explanatory Paul title. The riff is very Zeppelinesque, and Zep was a seemingly huge influence on this era of Kiss. It has some serious groove to it and Paul sings his ass off.“Rock And Roll Hell” was a song that was played live a couple of times on the 1982 tour. I would describe this Gene song as a slow burner. It seems to be about a kid who “might even steal a guitar” to get out of his rock and roll hell, and make the big time. Very cool groove and lyric.Everybody knows “I Love It Loud”. Your grandma knows “I Love It Loud”. At the time as a kid, I thought this was the greatest Kiss song ever. That drum beat, that chanting, and Gene’s awesome lyrics about taking no crap — yeah! That’s what every grade 8 student felt like! An anthem.The sole ballad “I Still Love You” is next, and it’s one of the best Paul vocal performances. Eric Carr play bass here.“Killer” (probably written at the same time as Killers?) is a really cool Gene Simmons song that has lots of interesting riffs and twists. I can’t believe how cool this song still is today. It’s fast, it has interesting backing vocals, and is insanely catchy.The album ends with Gene’s plodding epic, “War Machine” which still gets played live to this day, despite being retired briefly during the reunion tours. Gene wrote the song with Bryan Adams which would be a surprise to Adams fans. Who knew he could get so heavy? The lyrics are pure, vintage Gene: “Strike down the one who leads me, I’m gonna take his place, I’m gonna vindicate the human race.”“Creatures Of The Night” wound up being the first Kiss studio album to have only two lead singers: Gene and Paul. This would also prove to be Kiss’ final album in makeup. They had grounded themselves musically once again, while their biggest change was yet to happen….A must have in your 80s hard rock collection.