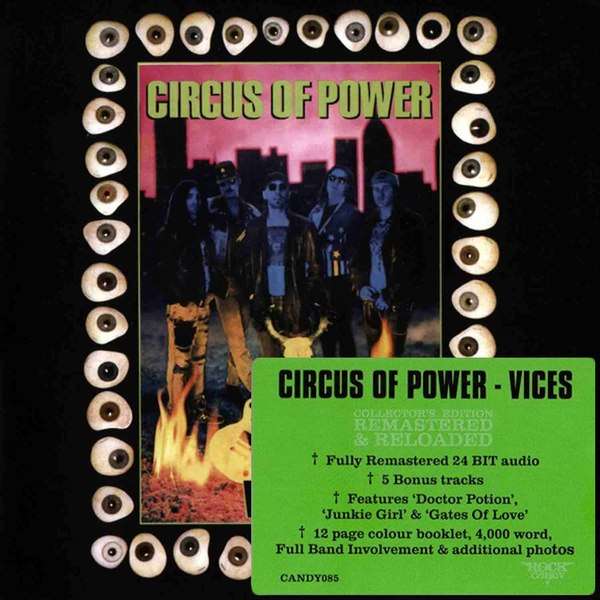 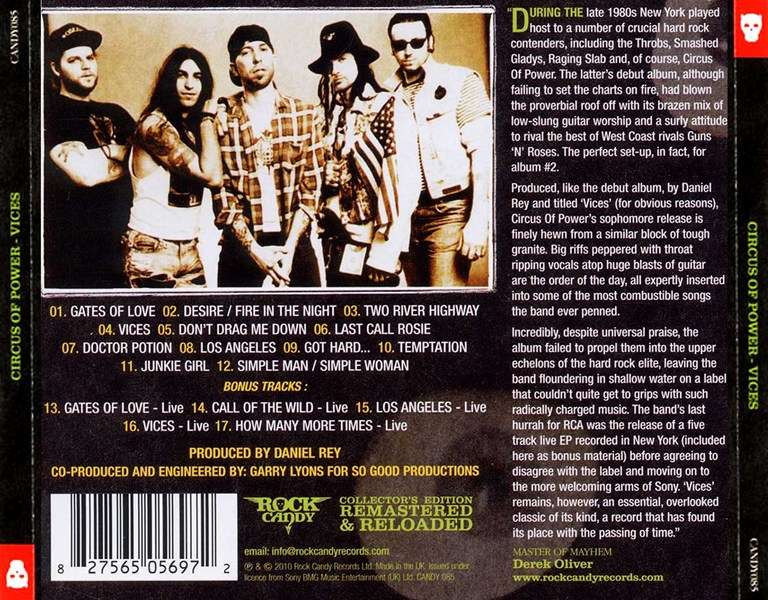 Circus of Power was the personification of East Coast sleaze rock during the late 80s and early 90s. Formed in the mid 1980s, during the burgeoning New York City club scene, the classic line-up of Alex Mitchell (vocals), Ryan Maher (drums), Ricky Beck Mahler (guitars), and Gary Sunshine (bass), were signed to RCA records and promptly released their seminal, self-titled debut album debut. Their brand of bluesy, bad-ass biker rock set the perfect backdrop for their lyrical swagger and stories of debauchery and depravity. A live EP, (1989's 'Still Alive'), and second full length, (1990's 'Vices'), continued their musical tradition and thrust the band towards new heights, securing major tours and MTV airplay. Line-up and label changes led to the third full length album, 1993's 'Magic and Madness' Released on Columbia Records, the album ushered in a more melodic sound for the band, while losing none of the grit that fans had grown to expect. The group disbanded in the mid-90s, and despite a few sporadic "reunion" gigs, Circus of Power has been largely inactive...until now. With a fresh new line-up, including Stoner Rock legend, Brant Bjork, commanding drumming duties, the band is set to release their first new material in a quarter of a century. Get ready to 'Motor' on down and revisit all of your old 'Vices', because C.O.P. is back!

Many of you have been asking for some old Rock Candy releases to complete collections, and the few days ago we featured the CIRCUS OF POWER self-titled album reissue. Now we have in exclusive their pretty hard to find ‘remastered & reloaded‘ version of the band’s second album “Vices”, including 5 bonus tracks.Circus Of Power debut album, although failing to set the charts on fire, had blown the proverbial roof off with its brazen mix of low-slung guitar worship and a surly attitude to rival the best of West Coast rivals Guns ‘N’ Roses.Produced, like the debut album, by Daniel Rey and titled ”Vices” (for obvious reasons), Circus Of Power’s sophomore release is finely hewn from a similar block of tough granite. Big riffs peppered with throat ripping vocals atop huge blasts of guitar are the order of the day, all expertly inserted into some of the most combustible songs the band ever penned.Released in 1990, just like the debut, ‘Vices’ resulted every bit as good as its predecessor – ‘Vices’ still had that same ‘fuck you’ attitude but benefitted no end from a noticeable improvement in songwriting.Furthermore, the addition of new bassist Zowie meant that Gary Sunshine could assume the role of second guitarist, the sinewy cut and thrust as he traded licks with Rickey Beck Mahler both enriching and reinforcing the band’s trademark bluesy sound.A sweat soaked, broiling cauldron of influences which encompassed everybody from AC/DC to Aerosmith, The Rolling Stones to Iggy Pop; on this release the Circus Of Power sound was enriched further with a healthy injection of Skynyrd meets Molly Hatchet style southern boogie (check out the pumping ‘Got Hard’ and you’ll see exactly what I mean).Attitude and aggression are always essential in this particular genre, but without great songs to back it up, you’ll sound find yourself discarded by the wayside … fortunately for them, this time around Circus Of Power had hit an ultra rich vein of creativity with the likes of ‘Gates Of Love’, ‘Vices’, ‘Don’t Drag Me Down’ and ‘Doctor Potion’ (to name but four).Once again superbly remastered by Jon Astley and five bonus tracks, this definitive version of ‘Vices’ is a fitting testament to a band at their peak.