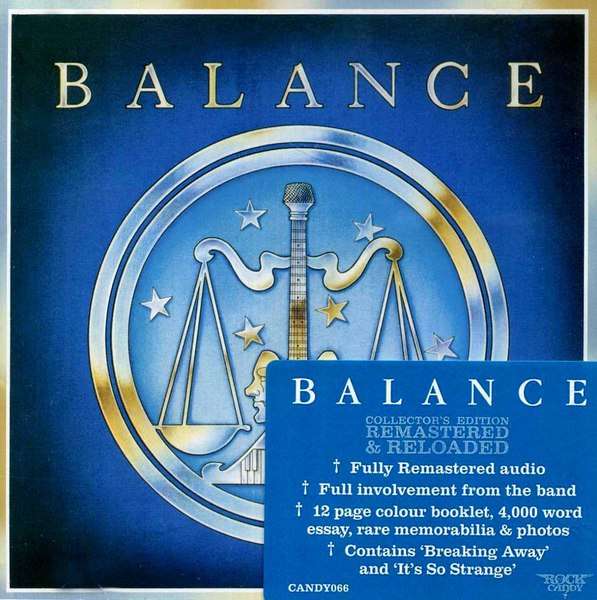 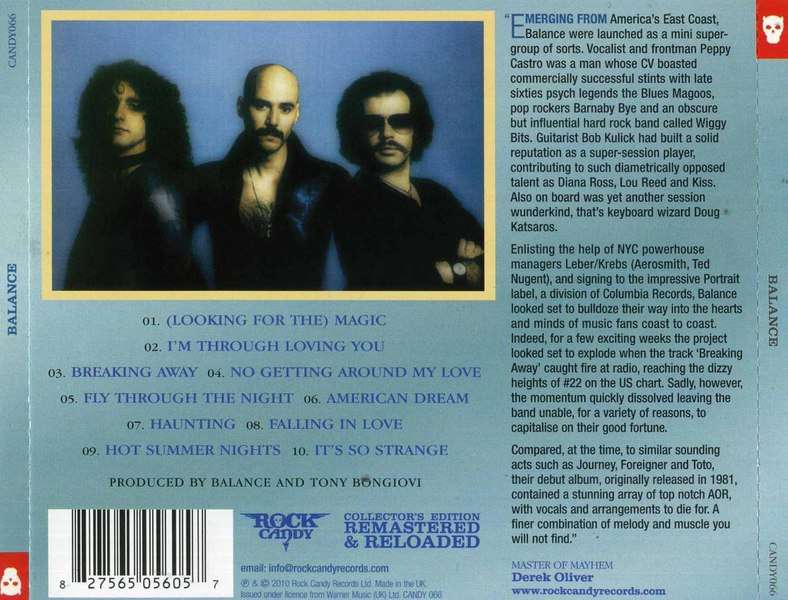 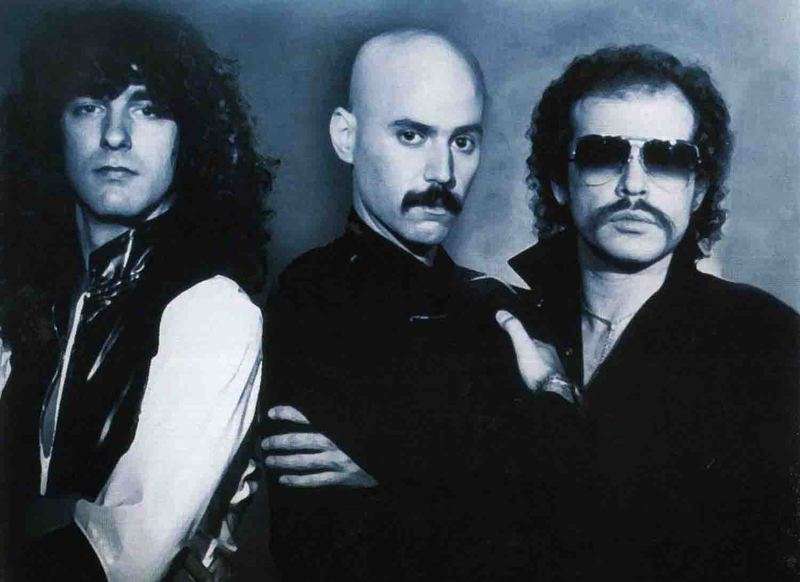 Balance was an early 1980s American hard rock band. based out of New York City, United States, and fronted by Peppy Castro, formerly of Blues Magoos.They are perhaps best known for their minor 1981 hit, "Breaking Away".In addition to Castro, original members included guitarist Bob Kulick and arranger/keyboardist Doug Katsaros.The trio recorded their self-titled debut album with session musicians, one of whom, drummer Andy Newmark also co-wrote one of the songs on the album and was apparently an official member of the band at one point. Newmark was later replaced by Gregg Gerson, who departed soon thereafter to play with Billy Idol. Prior to recording their follow-up album, Balance added the rhythm section of drummer Chuck Burgi (ex-Brand X) and bassist Dennis Feldman (ex-Speedway Blvd.) to the lineup.The group's most noteworthy release was 1981's "Breaking Away" from their eponymous debut album which reached No. 133 on the Billboard 200. The song peaked at No. 22 on the Billboard Hot 100 singles chart. The album's follow-up single, "Falling in Love", peaked at No. 58. The band failed to reach the chart again.In early 1982, Balance entered The Power Station in New York, now Avatar Studios, to produce their sophomore album, In For The Count,with Tony Bongiovi, a cousin of Jon Bon Jovi, engineering and co-producing. After a massive house cleaning on so-called 'Black Friday', when 200 staffers at CBS, Epic and Portrait were let go, Balance would lose their supporters at the label and In For The Count became a direct casualty of the turnover.Although things looked bleak at home, the band experienced one last hurrah when they were asked to write a song for a major Japanese commercial to launch the new Daihatsu Charade.The resulting song was "Ride the Wave" which was also commercially released through Polydor, with album leftover "She's Alone Tonight" on the B-side. Balance played a short tour of Japan before calling it quits due to lack of interest from their label and management company.Castro, Katsaros, Burgi, and Feldman (along with Bob Kulick's younger brother, Bruce) reunited briefly when they appeared on Michael Bolton's 1985 album, Everybody's Crazy. Kulick and Feldman, the latter adopting the name Dennis St. James and handling lead vocals, would re-team again in the band Skull whose sole album, No Bones About It, was released in 1991; Bruce Kulick and Chuck Burgi guested on various tracks.In the wake of the 2006 re-issue of In For the Count, Italian label Frontiers Records inquired about a possible new Balance album. Equilibrium was released in 2009 and features original core members Kulick, Castro and Katsaros, along with drummer Brett Chassen, who also co-produced with Kulick, as well as guest spots from Bruce Kulick on bass and Jesse Castro on drums.In 2014, the band reunited for its first live shows in 31 years for a short three-date tour in Sweden. Peppy Castro, Bob Kulick and Doug Katsaros were joined by Dan Larsson on bass and Jonas Wikström on drums. Sweden Rock Magazine gave the band a rave review of their gig at the Rockland Club in Sala, Sweden, on August 26, 2014.On October 6, 2015, Peppy Castro was interviewed by Swedish Radio about the continued and renewed interest in the band, such as fans of the band recently setting up a Facebook page wanting the band to play at Sweden Rock Festival in 2016.

An essential band in any Melodic Rock / AOR collection are without a doubt Americans BALANCE. Both their ’80s albums were officially released on CD & remastered by Rock Candy Records and are must haves for sure.Born in the US East Coast at the beginning of the Eighties, Balance were a mini super-group of sorts. Pride of place was taken by vocalist Peppy Castro a man whose CV boasted commercially successful stints with several acts from different genres.Guitarist Bob Kulick had built a solid reputation as a super-session player contributing to diametrically opposed talent as Diana Ross and Kiss. Third man on board was yet another session wunderkind; that’s keyboard wizard Doug Katsaros.Enlisting the help of NYC powerhouse managers Leber/Krebs and signing to the impressive Portrait label (a division of Columbia Records), Balance looked set to bulldoze their way into the hearts and minds of music fans coast to coast.Indeed, for a few exciting weeks the project looked set to explode when the track “Breaking Away” caught fire at radio, reaching the dizzy heights of #22 on the US chart.Sadly, however, the momentum quickly dissolved leaving the band unable to capitalize on their good fortune.Compared, at the time, to similar sounding acts such as Toto, Styx, Journey and Foreigner, this self-titled debut album originally released in 1981, contained a stunning array of top notch AOR with vocals and arrangements to die for.A finer combination of melody and catchy choruses with the unique FM Radio sound that ruled the era and become a staple for early ’80s AOR: lots of heavenly keyboards, powerful choruses and rich vocal harmonies.Songs like “Breaking Away” (with a Pomp dosage on it), the delicious “Looking For The Magic”, the catchy “Haunting” and “Fly Through The Night” and the sophisticated ballad “Falling In Love” are sure fire winners.“Balance” is one of the finest early ’80s AOR / Melodic Rock records from the American scene, wonderfully remastered by Rock Candy Records from original source tapes, including a complete full colour booklet with 4,000 word essay about the making of the album and a new interview and full involvement from the band.