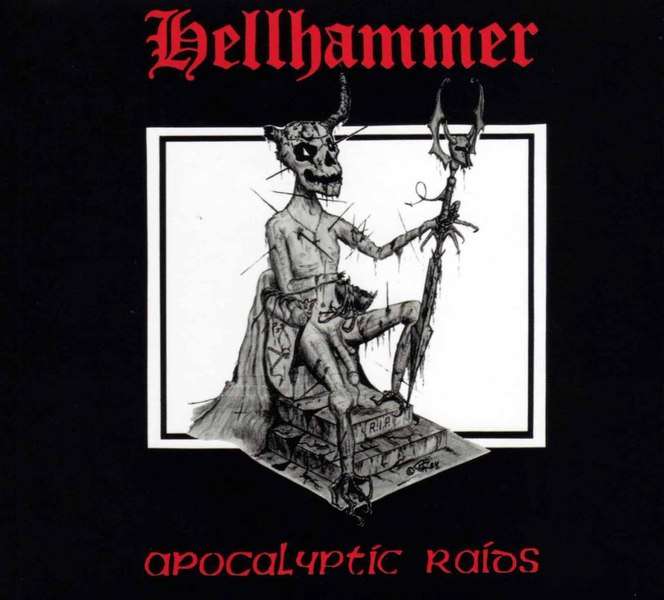 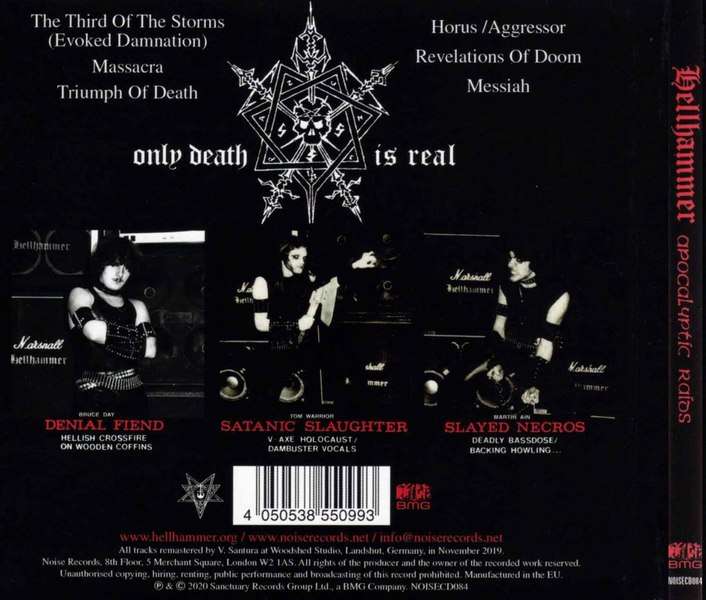 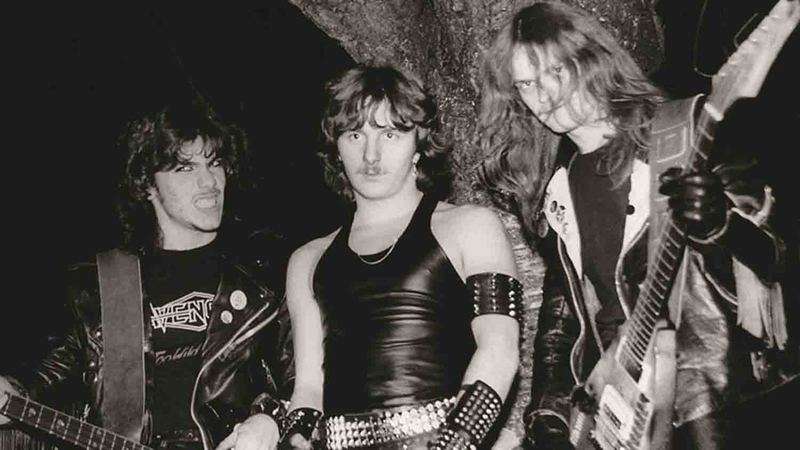 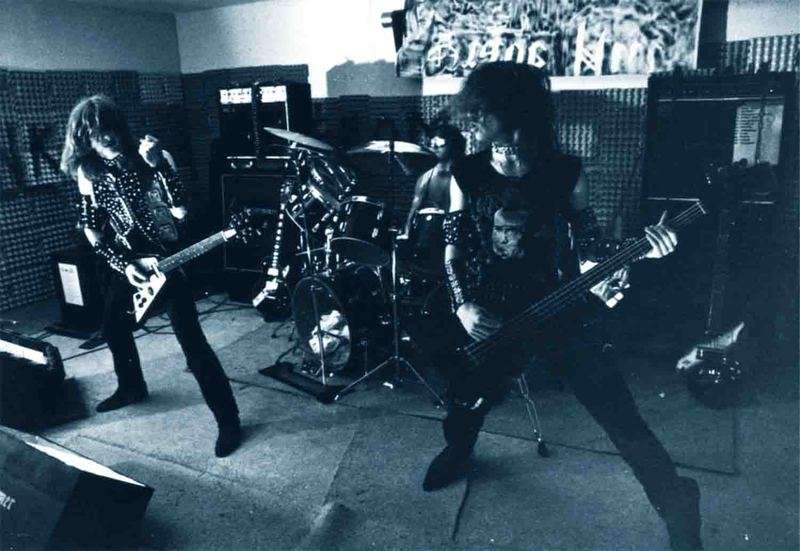 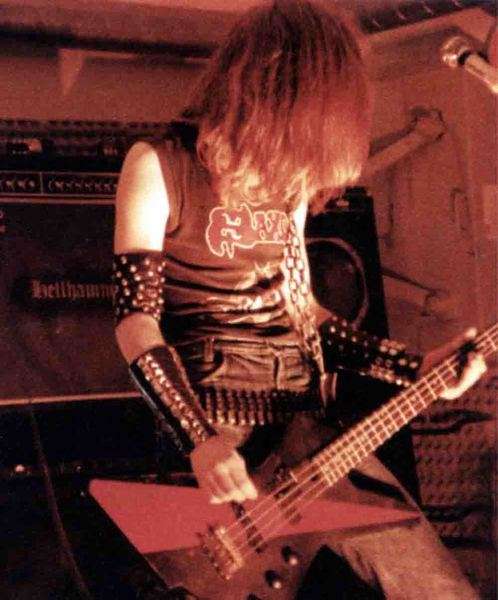 In the summer of 1981, at the height of the New Wave of British Heavy Metal movement, Tom Gabriel Warrior (née Tom Gabriel Fischer) traveled to London where he purchased a number of vinyl records, including Venom's debut single, "In League With Satan". At the time, the teenage metal fanatic was a bass player and founding member of Swiss four-piece Grave Hill, but inspired by deliberately playing Venom's 45rpm single slowed down to 33rpm, Warrior decided to make a drastic change in musical direction and produce something far more heavy and aggressive. Frustrated with the limitations of Grave Hill, Warrior eventually formed a new band in May 1982. The band was initially called Hammerhead but soon renamed itself Hellhammer. Joining Warrior, now on vocals and guitar, in this new venture was singer and bassist Steve Warrior (née Urs Sprenger) and drummer Pete Stratton. It soon became clear, however, that Stratton was severely lacking in ability, and in November 1982, he was replaced by ex-Moorhead drummer Bruce Day (née Jörg Neubart).In June 1983, Hellhammer recorded their first demo on an eight-track studio unit at their rehearsal bunker in Birchwil, Switzerland. A total of 17 songs were recorded over a two day period, with nine of the tracks scheduled to appear on the planned "Death Fiend" demo tape, which eventually was cancelled by the band. At this point, Hellhammer were still completely unknown outside of Switzerland, but that was about to change as 13 tracks from the recording sessions were packaged as the "Triumph Of Death" demo and unleashed to the metal media, with the accompanying demo sleeve proclaiming "Venom are killing music... Hellhammer are killing Venom". The reaction from the underground press was as extreme as the music. Notable magazines and fanzines such as Germany's Shock Power, France's Enfer, and America's Metal Rendezvous offered enthusiastic reviews, but elsewhere the response was far from glowing, with the UK publication Metal Forces in particular most scathing in their condemnation of the band. Nevertheless, the buzz on the worldwide underground to Hellhammer was overwhelming, and with original copies of "Triumph Of Death" quickly selling out, the tape soon became the most sought after demo in tape trading circles since Metallica's legendary "No Life 'Til Leather".Concurrently with the release of "Triumph Of Death", Hellhammer's members decided to adapt additional pseudonyms. Tom Gabriel Warrior became Satanic Slaughter, Steve Warrior chose Savage Damage, whilst Day was eventually named Denial Fiend. However, despite the band's new-found international recognition, Hellhammer underwent drastic changes and entered a period of chronically unstable line-ups. The main change was the separation from founding member Steve Warrior due to what Tom Gabriel Warrior subsequently described as his "lack of dedication". Only after recording a new demo in early December of 1983, the union with former Shizo bassist Martin Eric Ain (née Martin Eric Stricker, a.k.a. Slayed Necros) finally provided some stability. Ain had already been contributing ideas, concepts and lyrics for months.The new demo, "Satanic Rites", contained 10 tracks recorded in just 8 hours. Limited to an edition of 200, some copies were sent out to record companies. German label Noise Records were impressed enough to offer Hellhammer a three-year record deal. The band entered a Berlin studio in February 1984 to record material for the four-song "Apocalyptic Raids" EP, released in March 1984. Two additional songs from the same session - "Revelations Of Doom" and "Messiah" - were featured on Noise's "Death Metal" compilation album in May of that year. Meanwhile, Metal Blade Records licensed "Apocalyptic Raids" for the USA, simultaneously including Hellhammer's "Satanic Rites" demo track "Crucifixion" on their "Metal Massacre V" compilation.With the band's fan-base gathering momentum across the globe, it came as a shock to many in May 1984 when Warrior and Ain proclaimed that Hellhammer had reached its musical limitation and that the concept was too weak to continue. Having dissolved Hellhammer, Warrior and Ain soon announced they had forged a new avant-garde power trio by the name of Celtic Frost. Though the pioneering Celtic Frost went on to release landmark albums with 1985's "To Mega Therion" and 1987's "Into The Pandemonium", the name of Hellhammer remained a huge influence at the brutal end of the extreme metal scene and the band now enjoy a cult status among connoisseurs of the genre. 25 years on, "Demon Entrails" becomes the first official release of those legendary Hellhammer demos since the limited edition cassette editions in 1983.

Noise Records / BMG reissue the hugely influential "Apocalyptic Raids" by extreme metal forefathers, Hellhammer on deluxe, gatefold LP and mediabook CD. With concept and art direction by founding member Tom Gabriel Warrior. This 2020 version has been remastered by V.Santura of Triptykon and features an expanded booklet, rare photos and new liner notes.Tom Gabriel Warrior: "It truly is a pleasure to see BMG Rights Management/Noise Records finally utilizing their rights to significant parts of Hellhammer's early 1980s catalogue, and to know that they are doing this with utmost respect and the necessary understanding of the group's eminence and spirit. And it is an honour for me to have been asked to participate in this reissue project by developing the concept and overseeing both the re-mastering process and art direction. I am deeply grateful for the efforts the label has invested into this project, and I know I speak for all former Hellhammer band members, deceased and alive, by stating how grateful we all feel that Hellhammer's music is still relevant and in demand all of these many years later." "Apocalyptic Raids" is a triumph. Influential, violent beyond words and blacker than black this CD defines "necro" and "cult" in ways that I can barely begin to put to words. Vile...violent...bitterly recorded...what more could a man ask for? Tom G. Warrior was never more aggressive and motivated as he was here. Sure, the production "bites" (hey, this is "necro" you morons) but the feel is so raw and violent that you can't deny the overall mood and vibe. The playing is competant, and this allows the music to flow with a violence that captured the best parts of what would remain in Celtic Frost, but enhance them with a feeling that was long lost by the time of "To Mega Therion". Double-time-doom-black-metal. Nobody did this better than Hellhammer...The record explodes forth with the dominating "The Third of Strms" and follows with the meaty "one-two" punch of Massacra. Both tracks hammer along like hell's jackhammers on the inside of your skull. The moodier "Triumph of Death" and the drum-oriented "Horus/Aggressor" also work quite well. That's right folks...there is NO filler here! The best song is saved for being the ultra aggressive "Messiah". Never before did Tom G. Warrior pound along with such aggressive tones. This sadly, suffers slightly from the performance being a little off...but with songwriting like this who can complain? The riffs have yet to be matched.Hellhammer were a concept too good to last. Thankfully, despite the amount of "demo material" that found it's way too the surface, the band managed to quit the scene before they became a joke and plodded on with the ever-decaying Celtic Frost. For all fans of black metal, dark metal or just plain thrashing hell...this one is for you!