Lunatics Without Skateboards Inc. - Welcome To The Asylum (1989) 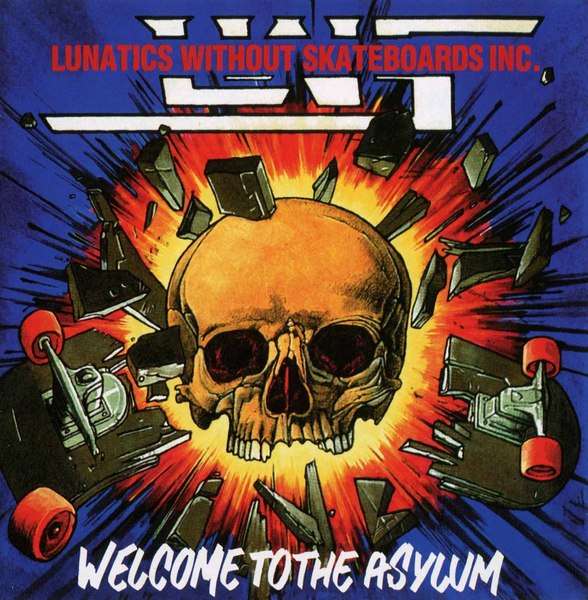 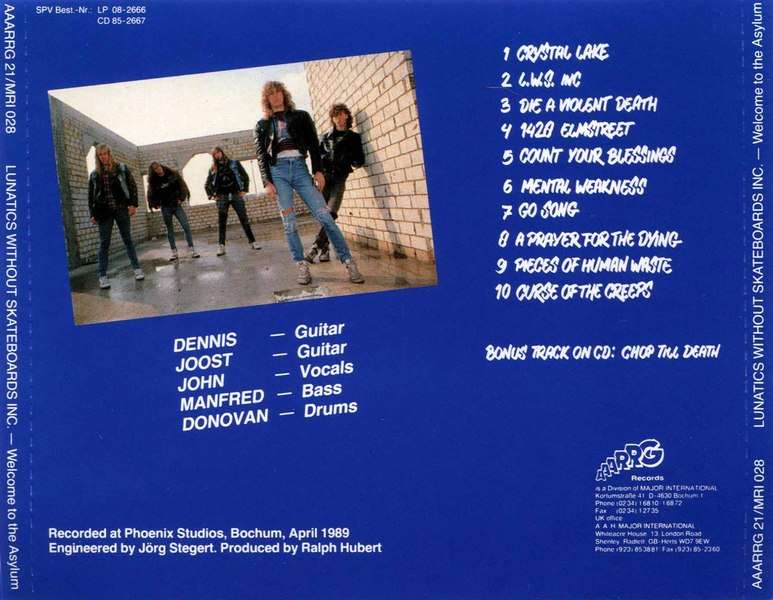 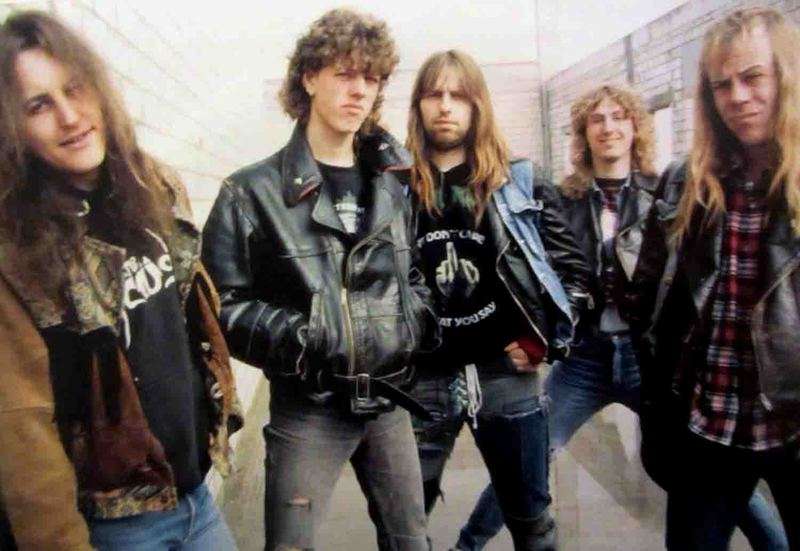 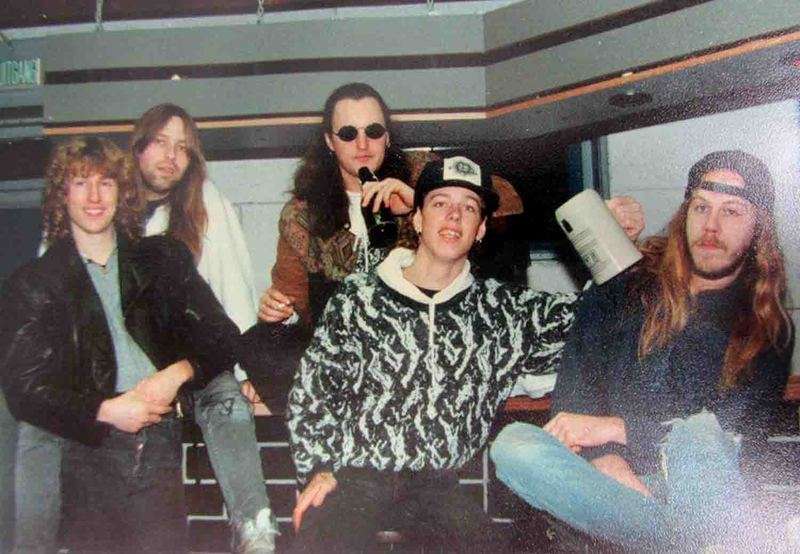 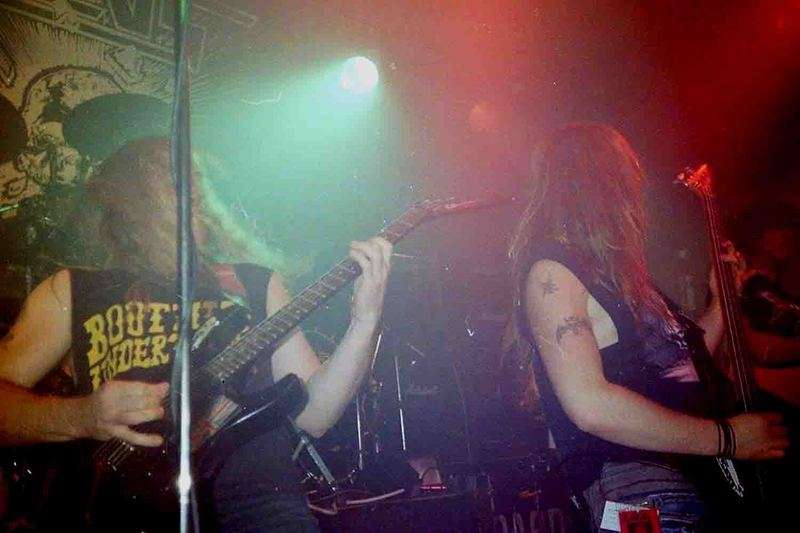 L.W.S. Inc. or "Lunatics Without Skateboards" was formed in November '87 from the ashes of Whiplash and Stray Bullets. From Stray Bullets came Joost Stolk (Guitar) and John Frijn (vocals) and from Whiplash came Dennis Hartog (guitar) and Manfred van Zadelhoff (bass). A drummer was found in Don Tesselaar. The guys knew each other for a long while so wanted to play just for fun like "Having a good time playing" and "We'll see how far we can make it". Their style of music is Thrash Metal but with a feeling for melody comparing bands like; Testament, Exodus and Death Angel. They didn't want to play songs from their former bands, so they worked very hard making own songs. On 20th March '88, L.W.S. went into the studio to record the infamous demo "Death and Die". This demo contains 5 songs with 20 minutes of playing time. L.W.S. inc. signed to the legendary Aaarrg Records. They established a reputation in the Thrash scene by playing gigs with bands like; Cyclone, Mandator, Upset Noise and Blessed Death. In April '89 they recorded their 1st LP "Welcome To The Asylum" containing elements of Hardcore, Speed and Thrash filled with an unidentifiable melodic sound. The lyrics are inspirated by fun, alcohol and movies to mention a few songs; "Die a Violent Death", "1428 Elmstreet" and "Chop Till Death".

Okay, "Welcome to the Asylum" did not start a revolution, its innovative force tended toward zero and unique selling points had better things to do than to liaise with the music of the Dutch formation. The album failed to go down into the history books and that is no surprise. Yet I am egocentric and so my personal taste is naturally of more importance than the official heavy metal historiography.Having said this, it is time to inspect the content of the album. "Welcome to the Asylum" is the work of a unit that wants to demonstrate its relatively broad spectrum. Without leaving the thrash metal territory, the band has penned fairly different tunes. "Count Your Blessings" has balladic sections and needs more than two minutes before it gains momentum. It starts very carefully, its mid part sends greetings to Atrophy and the last third tells the listener how to thrash his living room, the concert hall or any other place. "Mental Weakness" seems to be similarly constructed, but its emotional beginning ends abruptly and is replaced by a fantastic high speed assault. Nervous leads and sharp riffs create a great number which is inter alia enriched by a partly hysterical lead singer. "Go Song" takes a different course while showing a punk affinity. Well, songs with a duration of only one minute are mostly not overly complex. Just some fast guitars, simple drumming and, let me say, very generic lyrics. "1428 Elmstreet", to mention a last example, does not really know what it wants to be. Its first half sounds like a horror story, the second part delivers high speed thrash. The song collection of this debut does doubtlessly not create a very homogeneous appearance, regardless of the quality of the single songs.Anyway, most songs of this "daily life thrash" reflect a lively formation with solid technical and compositional skills. One can feel the enthusiasm of the guys and it goes without saying that this is a good thing. The lead singer, for example, is definitely not the most talented dude, but he does not care about his limitations. He reaches a solid level and his pretty ordinary approach works on this album. In addition, he gets support by his band comrades. The concise chorus of the band anthem profits from the gang shouts of the guys. That's characteristic for this album, because each and every member shows a strong performance. The solos, for instance, do not deliver uninspired noise. Instead, they score with a certain flow. But let's broaden the view, because the sound engineer also deserves applause. "Welcome to the Asylum" can rely on its transparent, well-balanced and robust mix. One might say that it lacks of a small amount of filth, but that's not my point of view. These Lunatics are oriented to the classic sound of American thrash productions, although some punk elements have crept in their compositions. And we know that bands such as Forbidden, Exodus or the already mentioned Atrophy did not focus on filthy productions as well.The last highlight is called "A Prayer for the Dying". It is among the most raging pieces of this debut. The track grows constantly and the desperate chorus marks its point of culmination. Even a less intense instrumental part cannot hurt the flow of the song. In view of such a speedster and the overall performance, it is a pity that this album has fallen into oblivion. Aggravating this situation, my old skateboard is broken as well.