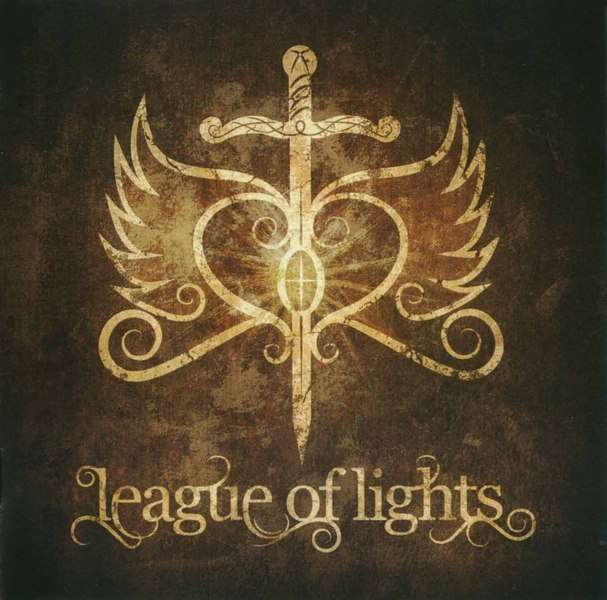 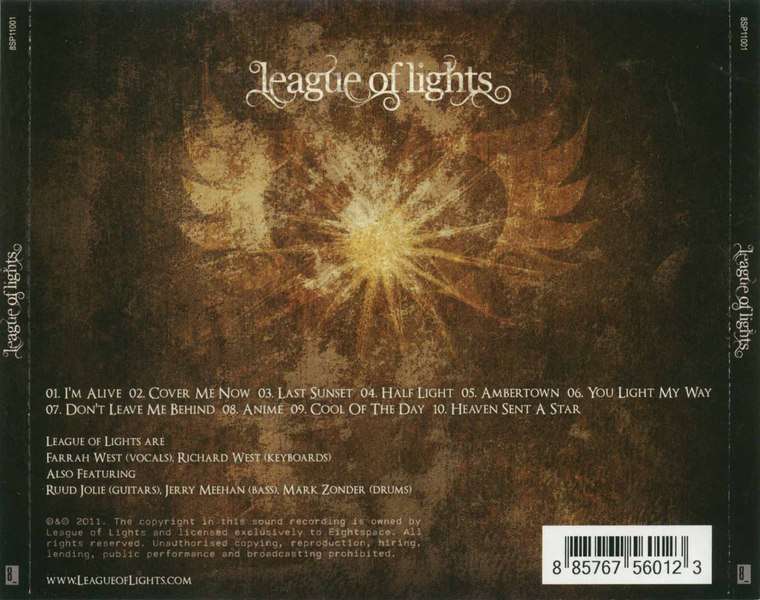 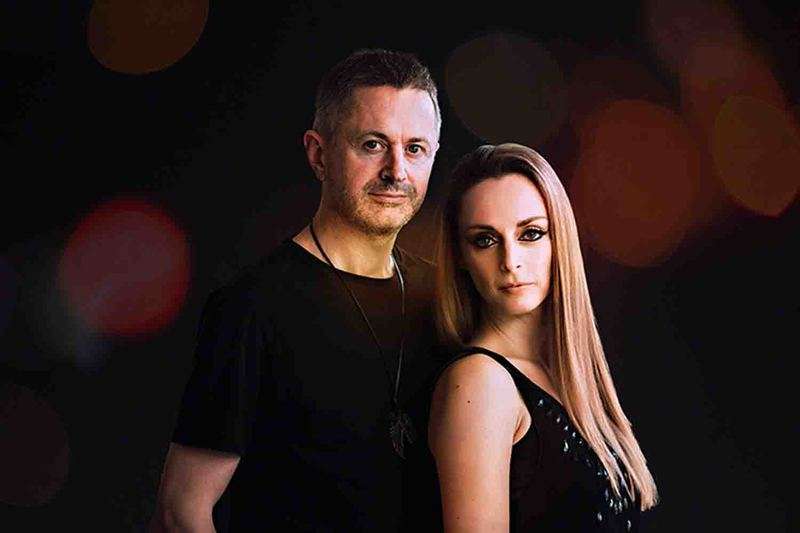 League of Lights is a modern melodic rock band formed in the UK during 2010.League of Lights – melodic rock duo featuring couple Farrah and Richard West.Farrah and Richard met on the outskirts of London, crossing paths for the first time in the mid 1990’s. Many years later they assembled a stellar cast of luminaries comprising Dutch guitarist Ruud Jolie (Within Temptation), American drummer Mark Zonder (Fates Warning) and fellow Brit Jerry Meehan (Robbie Williams) to guest on their debut album in 2011. Simply entitled League of Lights, the album fused elements of pop, rock and metal into their own unique blend.“We come from very different musical backgrounds,” says Richard, “and League of Lights is all about where we meet in the middle. It couldn’t exist without both of us”.The following year the duo teamed up with Glynn Morgan (Threshold) to record the single “Forever”. The three also performed together on stage for a unique concert backed by a 40-voice choir.Now in 2019 Farrah and Richard are back with a new album “In the in Between” that showcases Farrah’s sublime and enchanting vocals across 14 new original songs with a sound that makes room for electronic rock, synth pop, piano, cinematic soundscapes and everything in between.“It’s been a long journey to get here,” says Farrah. “From the day we recorded our first song together we’ve been working towards creating something that combines the heart of who we are. We’re really proud to have reached this point on our journey “.

After eight years since their debut album, LEAGUE OF LIGHTS are ready to return with a 2nd effort in a few weeks. Meanwhile one of you asked for their self-titled first full length, plus a standalone single appeared two years after, and the 2019 advance from the new CD.U.K.’s League Of Lights is some kind of super group fronted by Threshold keyboardist and songwriter Richard West, created around gorgeous singer Farrah West, his wife. They’re joined by Ruud Jolie from the mighty Within Temptation on guitar, Fates Warning’s drummer Mark Zonder, and bassist Jerry Meehan who has played with such luminaries as Robbie Williams, Chris de Burgh and Brian Ferry.They describe themselves as ‘a modern melodic rock group with ’80s / ’90s pop sensibilities’, and this seems like a fairly good description, but there is more.With Farrah West’s catchy vocals underpinned by varied synth modulations, some electronic elements, and an overall ’80s feel, “I’m Alive” defines the direction for the album. Farrah does indeed possess a voice suitable to eighties synth-pop, and together with her husband’s contribution the blueprint of the songs is set.Richard West is critical to each and every song on the album. He uses so many sound samples, symphonic textures and tones but he refrains from his role in Threshold in that there are no synth leads on this song. Rather, the emphasis is on the vocals from start to finish with inspiring lyrics saturated in faith, hope and love.On drums there’s ex-Fates Warning demigod, Mark Zonder. This being basically a pop-rock structured album, Zonder’s contribution mostly holds down the rhythmic core with steady 4/4 beats, but his tone is still as unique as always.In order to add diversity to the songcraft, the West duo’s “Last Senset” is washed over with a spine-tinkling piano theme and New Age-like sound explorations.On guitars, there is Within Temptation’s Ruud Jolie at the helm. Jolie’s playing is pretty similar to his work with his own band, as he usually plays within the realm of pop music sensibilities — just as these songs dictate.Therefore, it would be wise not to expect any mammoth riffs or guitar licks. The most noticeable riffing you’ll hear is in the intro of “Ambertown” and the acoustic guitars planted underneath Farrah’s indelible vocals on “Anime.” This one sounds like a soundtrack played during the most heartbreaking scene of a romantic comedy. Her singing is sublime.The album’s secret hit is “Half Light” because it is the song where Richard West returns to his atmospheric playing heard in Threshold. The keys on this track evoke Kevin Moore’s (original Dream Theater keyboardist) solo material with sparse notes ringing atop Farrah West’s multi-tracked vocals whilst “Cool of the Day” is based entirely on synth-piano and her gorgeous a capella vocals.League Of Lights is a very, very pleasant surprise in the current scene. Soft and gentle melodic rock tracks but not in the ‘anthem’ style, the tunes have a strong ’80s pop-rock flair with a soft neo prog aura and a lite AOR touch.Think as a mix of Wetton/Downes Icon going melodic rock, a hint of Bangles catchiness, a touch of AOR from Issa solo albums, and Magnum lite progressive moments, resulting in fresh, vibrant and why not, sumptuous rock.The charming and fragile voice of Farrah West is the signature of the band; her style has a lot of similarities with the English ’80s female pop scene. She sings the songs beautifully and emotively without ever resorting to any wailing or screaming, relying on tone, timbre, melody and clarity rather than most vocalists today who feel the need to over-sing.Richard’s crystal clear production allows you to hear every nuance of the music, power is applied with restraint and at exactly the right moments, the sound is subtle instead of bombastic, very different to Within Temptations 80’s infused ‘The Unforgiving’ which might appear on paper very similar, especially with Ruud playing on both, the yin to their yang.This superbly written, performed and produced album could have been massive in the mainstream in 1988, it has that right mix of outstanding musicianship and accessible songs that will appeal to a very broad spectrum of rock music lovers, as well as prog and metal fans thanks to their lineage.Sophisticated and really interesting is the key here.