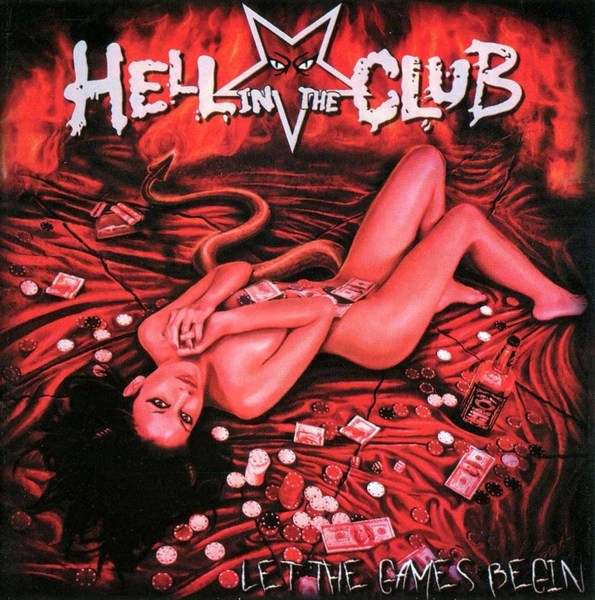 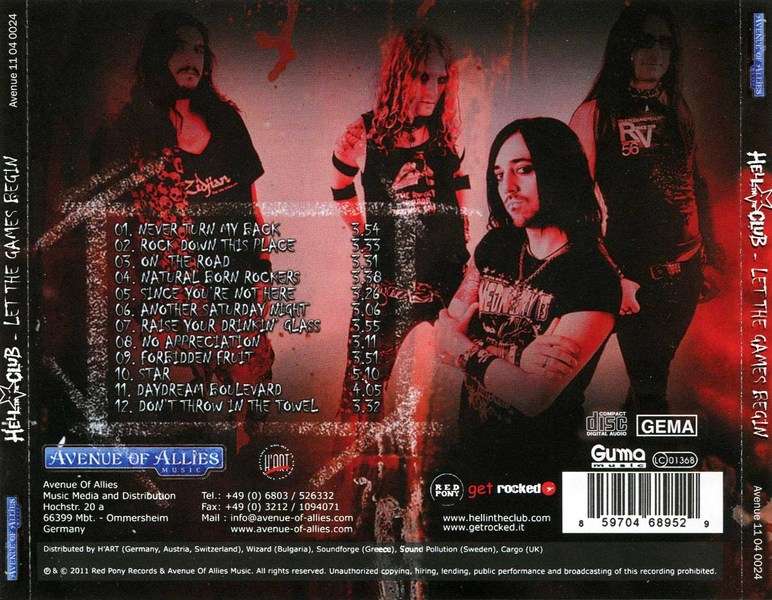 A big new rock'n'roll band that knocks down your soul and takes you right into a hellride of fun, power and emotions with a big dose of hard rock!Damna on vocals, Andrea Buratto on bass, Federico Pennazzato on drums and Andrea Piccardi on the guitar, HELL IN THE CLUB will distress you, they'll make you dance, sing and bang your heads with their songs and their amazing live shows...rock'n'roll is the keyword!!HELL IN THE CLUB includes members of acclaimed acts such as Elvenking, Death SS and Secret Sphere, but their music stands out as something totally different: they mix classic hard rock and modern sounds, heavy metal and party songs, fifties rock’n’roll and anything in between. The NEW ALBUM ‘Devil On My Shoulder’ is a powerful, exciting album that displays strong songwriting capabilities, top notch musicianship and meaningful lyrics (one song is based on Daniel Pennac’s ‘La Saga Malausséne, another on Paola Barbato’s ‘Mani Nude’), in the vein of the great heavy/rock albums of our times. ‘Devil On My Shoulder’ was produced by Simone Mularoni (DGM, Empyrios) at Domination Studios in San Marino, Italy and will be available starting from November 4th, 2014.

Italy has steadily climbed up to #2 over the last couple of years when it comes to the number of upcoming sleaze/hair metal bands coming out. While Swedish bands (yep, they’re still #1) manage to enter my annual Top 10 lists on a regular basis, Italian bands always seemed to fall short. Sometimes they were lacking a good singer, the production values couldn’t keep up with the songs or they just didn’t know how to write great rock songs. When I first heard of Hell In The Club I was expecting more of the same… boy, was I to be proven wrong! Hell In The Club is the brainchild of several members of well-known Italian metal bands Elvenking and Secret Sphere. Although technically a new band, with Let The Games Begin being the debut, the band member’s backgrounds shine through — not sound wise, but experience wise — which means that Hell In The Club manage to evade all of the aforementioned Italian problems. Namely, singer Dave Moras has a variable voice which fits surprisingly well with the ’80s inspired brand of rock Hell In The Club offer and the production sounds big, sometimes even rivaling that of Chris Laney‘s magic hands.Finally, do Hell In The Club manage to come up with good songs? They do, definitely! The first two tracks, “Never Turn My Back” and “Rock Down This Place”, set the pace and lead right into the definite highlight of Let The Games Begin — “On The Road”. Combining the elements of Bon Jovi and Skid Row in same manner Crazy Lixx does, this cut is (to my ears) simply the best rock song ever to come out of Italy. The album is far from over after that track though — for ballad-lovers there’s “Since You’re Not Here” and “Star”. If you prefer it heavier listen to “Natural Born Rockers” or “No Appreciation”, and if you simply want more of that infectious stadium-rock displayed on the album’s first three tracks treat yourself to “Raise Your Drinkin’ Glass”, “Forbidden Fruit” and “Don’t Throw In The Towel”. The only minor down point of the entire CD is the funky “Daydream Boulevard”.Hell In The Club starts off 2011 with a very enjoyable slab of modern arena-rock. If Let The Games Begin doesn’t appear on my Top 10 list at the end of the year, it would certainly be due to strong competition… because this debut CD is pretty much flawless.