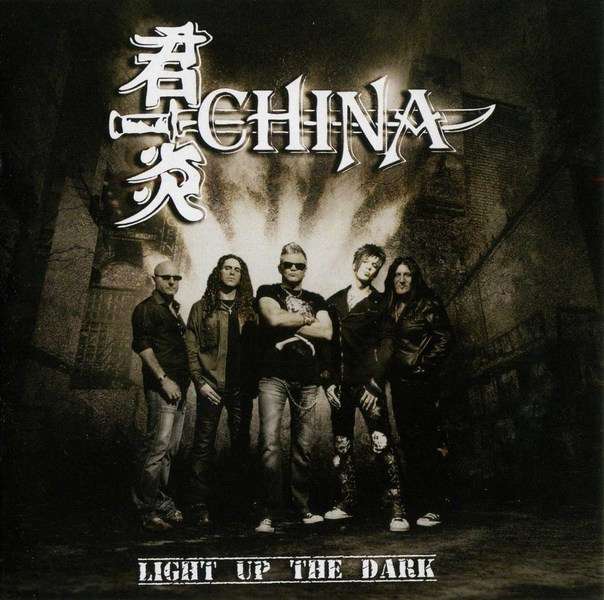 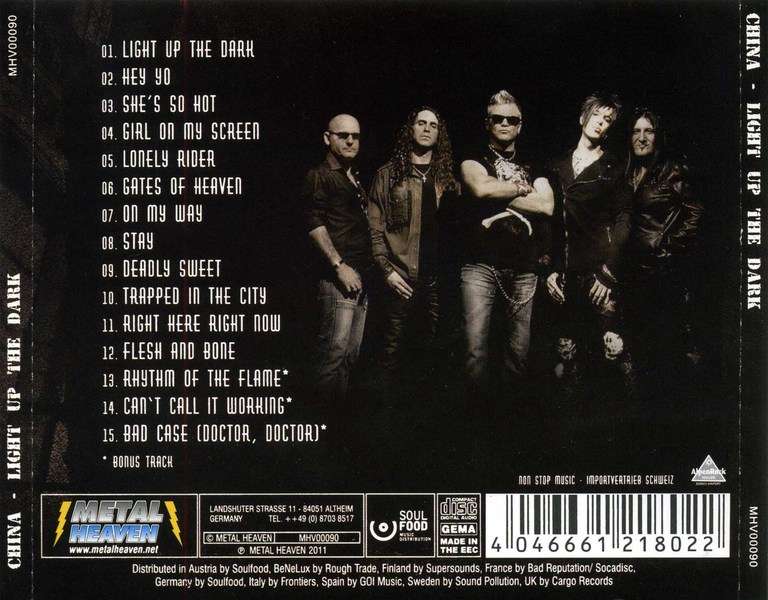 China is a Hard Rock band from Switzerland.They celebrated in the late 1980s and early 1990s, international success in your albums reached the top 10 in each of Switzerland, and good rankings in the English, German and Japanese charts. China also gained notoriety through their changing singers. On each of their albums is heard another singer.China founded in 1985 by drummer John Dommen 1988 and signed a recording contract with Phonogram. In the cast Math Shiverow (vocals), Claudio Matteo (guitar), Freddy Laurence (guitar), Marc Lynn (bass) and John Dommen (drums) they take on the self-titled debut album. They receive support in the recordings of the two Crocus musicians Marc Storace (vocals) and Fernando von Arb (guitar). Storace sings some backing vocals and Von Arb wrote the song Back To You for the album.A tour as support for Victory follows the same way as another concert tour with Bonfire.Shiverow and Lynn left the band after the tour. Marc Lynn is rising a little later in the Gotthard , which are called at this time Krak. New singer is the former Krokus guitarist Patrick Mason and joins as the new bassist Brian Kofmehl of killer to the band.The next album Sign In The Sky falls, not least by working with producer Stephen Galfas from significantly more mature than the debut. The second single In The Middle Of The Night reached # 11 in the Swiss charts, the album lands at No. 2 But Mason does not stay in the band.Already on the tour he will be replaced by the American Eric St. Michaels, with China the live album Live China and the next studio album Go All The Way record. 1992 St. Michaels pulls back to America, which is why China complete the following gigs with three different singers. The main part takes Krokus singer Marc Storace. A recorded by Swiss Radio DRS Performance Live uff dr Gass of 1993 appears seven years later under the title Alive 2000 on CD.1995 China published their album Natural Groove , which comes up again with a new singer. Douglas McCowan distinguished here responsible for the vocals and the drums sits Giovanni Giorgi. After the album, the band is put on hold. In 2000, the band completed a tour China Revisited at the three singers are again at the start (Math Shiverow, Eric St. Michaels and Marc Storace).2003 come rumors that Patrick Mason (vocals), Claudio Matteo (guitar), Freddy Laurence (guitar), Brian Kofmehl (bass) and John Dommen (drums) are working on a new studio album. In May 2004, Freddy Laurence (aka Freddy Scherrer) increases as a substitute for Mandy Meyer at Gotthard one.In 2007, China reformed again and it is first time on 2 June 2007 at the Spirit of Rock together on stage again.After successful concerts in 2008 and 2009, China published in 2010 with the new guitarist Mack Schildknecht their fifth studio album in 15 years, Light Up The Dark . There follow in the summer including four as a support group of crocus.

A new CHINA album after…how many years, really? 1995’s “Natural Groove” was the last cut heard from the Swiss hardrockers while it’s been 21 years now from the highly-acclaimed “Sign In The Sky” days, and we should inform the readers Universal Switzerland released the “The Very Best Of China” (2008) compilation featuring three brand new tracks (all of them featured here). Well, you can’t teach an ol’ dog new tricks, right? Well, in the “Light Up The Dark” case maybe these hounds seem to have been given some extra lessons in the musicmaking class.When CHINA begun a promising career back in 1988 with “China” it was Claudio Matteo striking hard his riff and solo works, among many things CHINA became famous for. Being the only surviving member of the original lineup – singer Eric St. Michaels and bassist Brian “Beat” Kofmehl joined for the follow-up 1989 masterpiece – Claudio is the one having seen all of CHINA’s ups and downs throughout the years. Hence – maybe – the maturity/wisdom flowing from the new disc’s numbers. Of course, “Light Up The Dark” has its asskickin’ moments too but the key factor here should be the - modern or lunar - rockin’ vibe floating in this recent album.The same-title track storms in and it’s tome for some hardrockin’ shakin to the spitfiring guitars, drums and bass, an ideal companion to your Saturday club nights. “Hey Yo” is the kind of song I’d never be ready to listen to from a band like CHINA. The melodic bridge/chorus is OK but the guitars sound – this goes for the whole album, really – is too fuzzy/modern for the band’s core fan base, I’m afraid. “She’s Hot” is groovy and should leave no hip unshaken, while “Girl On The Screen” is a killer rollin’ thunder resembling to CHINA’s best moments off the first two albums (or – for the younger fans - to GOTTHARD’s dynamic likes). “Lonely Rider” is as American as it can get, with a slice of ‘just US Rock’ aura in the vocal harmonies and basic riff…leading us to “Gates Of Heaven”’s emotional breeze; a slow cut bringing on memories of sweet power ballads in the late 80s/early 90s but with the late BON JOVI/JOURNEY sonic aesthetics.“On My Way” is interesting but more of a ‘happy’ number in the CHEAP TRICK way - than I can get from a band like CHINA, haha; Marc Storace (the legendary KROKUS singer) sings backing vocals here. “Stay” is again in this ‘Rock mode on’ mature e.g. WARRANT path with a vintage wah-wah solo shining. “Deadly Sweet” boasts a weird riff and alike vocal harmonies, quite ‘grunge’-isque for my taste; the solo is awesome, though. “Trapped In The City” brings forth the in-your-face riffing and pounding creating a boozin’ mood again. “Right Here, Right Now” impedes things a little bit sending 70s-to-90s shivers down your spine and – surprisingly – can hold as an attraction for the whole album. “Flesh And Bone”’s groovy tempo says goodbye in a fresh way and 45-50 minutes has passed by leading to a diverse conclusion that……CHINA has progressed or matured or settled down or whatever you like to name it, in this new album. Erik’s vocals are warmer and less rebellious, the guitars rock hard but also ride free being applicable to all Rock fans, vintage, typical or contemporary, building an album that gradually won my ears since – in a way – you match the CD’s criteria; we’ve also grown up, like it or not. “Light Up The Dark” resembles to a long lost friend: we ‘ve not met in years, each one’s built his own beliefs all this time but what counts is that the feeling is here and it’s good to spend some time with good company again, no questions asked.