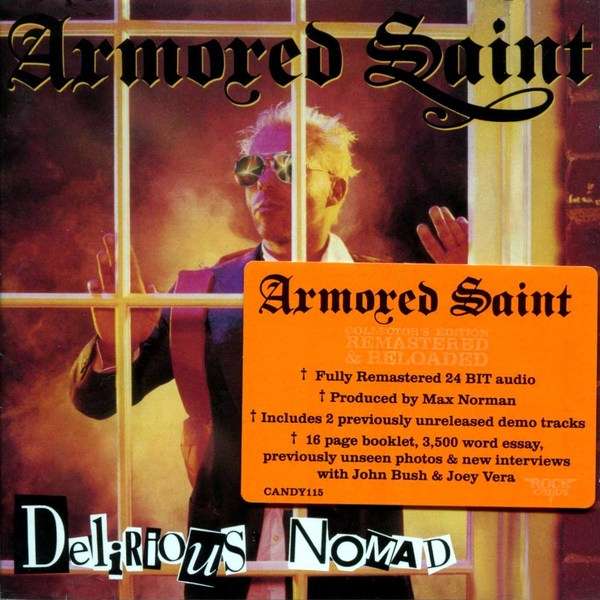 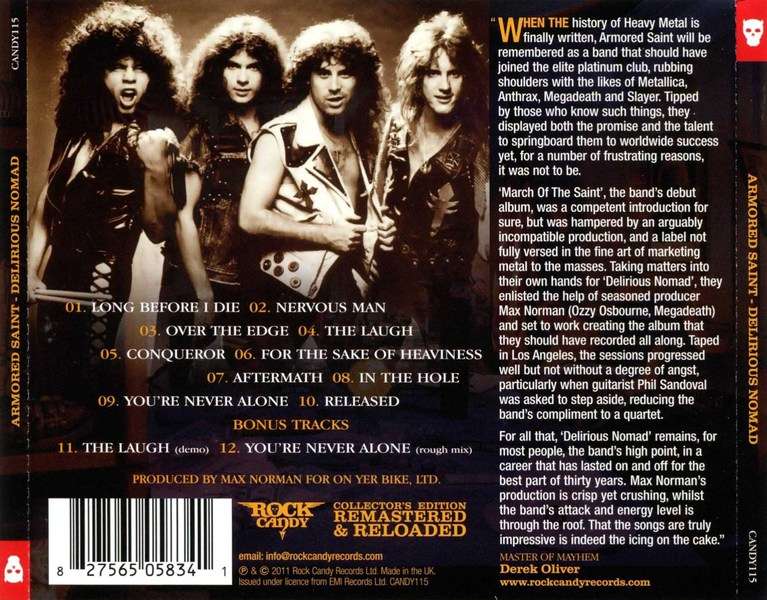 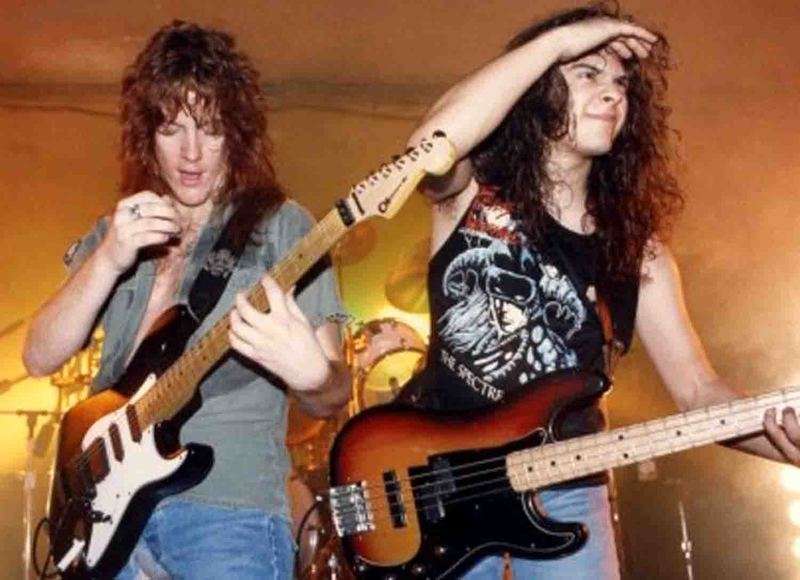 Armored Saint is an American heavy metal band originating from Los Angeles, California, United States.Armored Saint was formed in 1982 by brothers Phil Sandoval (guitar) and Gonzo Sandoval (drums), and guitarist David Prichard, while attending South Pasadena High School. Next to join were singer John Bush - also a South Pasadena High School Alumni - and bassist Joey Vera. Gonzo Sandoval came up with the name after getting stoned with the other band members and seeing the film Excalibur[citation needed] at a theater in Monterey Park. Armored Saint recorded a five song demo that landed the song "Lesson Well Learned" on the compilation album Metal Massacre II. Three of these demo songs were then used for the band's self-titled EP on Metal Blade Records in 1983. The group then signed with Chrysalis Records in 1984.Armored Saint released their debut album March of the Saint in 1984 followed by 1985's Delirious Nomad. The debut album yielded a minor MTV hit with "Can U Deliver?". After the release of Delirious Nomad, guitarist Phil Sandoval left the group. Their third album, Raising Fear, was recorded by the remaining four members. Unhappy with their lack of success on the Chrysalis label, Armored Saint returned to Metal Blade in 1989. Soon after the release of their first live album Saints Will Conquer the band added Jeff Duncan formerly of the L.A. club band Odin as second guitarist who is still in the band to this day.While writing and recording rough four-track demos for their next studio album, guitarist Dave Prichard was diagnosed with leukemia. Prichard succumbed to the disease before recording sessions for Symbol of Salvation began. After a brief hiatus, Phil Sandoval returned to the band to replace Prichard. The following year, Symbol of Salvation was released to widespread critical success. It was dedicated to the spirit and memory of Dave Prichard, whose solo on the demo recording of the song "Tainted Past" was used on the album.Following the successful Symbol of Salvation tour, The band recorded and had hits with "Reign of Fire" and "Last Train Home" in 1991. The following year the band contributed a song to the Hellraiser III: Hell on Earth soundtrack, as well as made a brief appearance in the film. Several months later, John Bush was offered the position of lead vocalist in the very successful thrash band Anthrax. Unsure of Armored Saint's future, Bush accepted the job. The remaining members declined to continue, and Armored Saint was officially disbanded.After Armored Saint disbanded, Joey Vera kept busy playing with such bands as Fates Warning, Lizzy Borden and Chroma Key. He released a solo album in 1994 and started a successful second career as a producer and engineer.In 1999, with Anthrax on temporary hiatus, John Bush and Joey Vera decided to reform Armored Saint. The entire Symbol of Salvation lineup returned to the studio, and in 2000 the album Revelation was released. It included the band's first song with Spanish lyrics, "No Me Digas". A small club tour opening for Dio and Lynch Mob followed.The following year, the band released Nod to the Old School, a collection of rarities, demos and outtakes (many from the Prichard years), plus a few new tracks. Soon after, John Bush returned to the studio with Anthrax, and Armored Saint was once again placed on indefinite hiatus.In 2004, Joey Vera re-joined Bush in Anthrax on a temporary basis, replacing bassist Frank Bello. Early in 2005, Anthrax's Scott Ian announced that their classic "Among the Living"-era lineup was reforming, leaving the membership of Bush and Vera in question. Bush stated his involvement with Anthrax was over, and Dan Nelson took over vocal duties in the band in 2007. This move gave hope to many that Armored Saint would once again record. A one-off show with the Revelation lineup took place in 2005, and in 2006 the band embarked on a new tour.As part of their 20th anniversary, Metal Blade released a special edition of Symbol of Salvation. Also reissued was the band's long out of print live video A Trip Thru Red Times.The band finished recording their new album titled La Raza, which was released on March 16, 2010.On December 7, 2011, the band played the role of opening act for the 30th Anniversary of Metallica show at the Fillmore.On February 11, 2013, Joey Vera officially announced via Facebook and Twitter that the band had begun working on a new album. The album, titled Win Hands Down, will be released on June 2, 2015.

Metal Blade Records has just reissued ARMORED SAINT‘s second full length album “Delirious Nomad” in its original, regular version. However, we recommend this Rock Candy Records ‘Remastered & Reloaded‘ release, not only sporting a fantastic sound quality but also 2 extra tracks.After their celebrated debut LP, for second album “Delirious Nomad” the band and the label enlisted the help of seasoned producer Max Norman (Ozzy Osbourne, Y&T) to provide a polished, crisp sound.Since opener ‘Long Before I Die’ you can tell this second album is certainly a more refined, more confident effort than its predecessor, with elaborated, polished songwriting.Standouts like ‘Over the Edge’,”For the Sake of Heaviness’ and ‘In the Hole’ are meticulous studio creations which proved the band’s songwriting talents were indeed improving from strength to strength.The stunning beauty of the epic ‘Aftermath’ with its glorious smorgasbord of harmony guitars, represents a career peak by any standard. ‘You’re Never Alone’ is classic US metal, but the overall album sound & production is really melodic.When you arrive to singer John Bush’s laugh towards the end of final track ‘Released’, you realize this is one of those albums that has all of the essentials to make a classic: incredible songs, crunchy guitar work by the late Dave Prichard, a crushing rhythm section, and one of the best metal lead singers ever in John Bush.Without a doubt, it is one of those albums for the ages.This Rock Candy remastering on “Delirious Nomad” is a noticeable improvement over the CD version Metal Blade put out in the mid ’90s. The main attraction is the excellent 24-bit digital remastering from original source tapes, but there are also a pair of interesting bonus tracks (very good sound) and a complete 16 page full colour booklet full of rare photos and a detailed essay about the recording.In other words, it’s the typical high quality Rock Candy remastered reissue.Great, underrated album tagged as US metal but one that will amaze aficionados to more melodic stuff. If you missed “Delirious Nomad” back then in the mid-80s, give it a proper listen now, you’ll be pleasantly surprised.