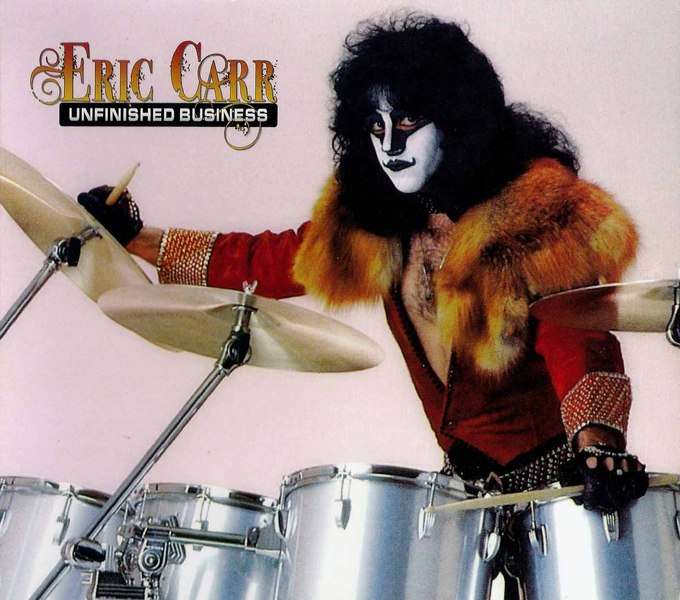 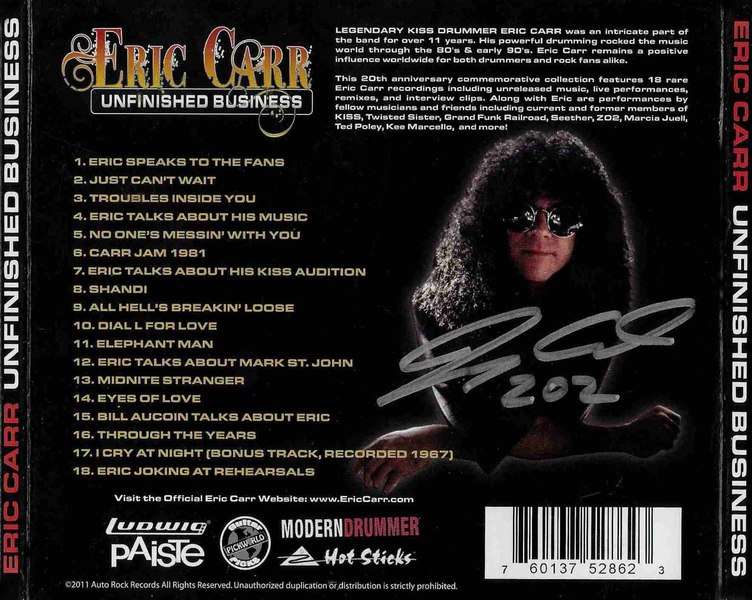 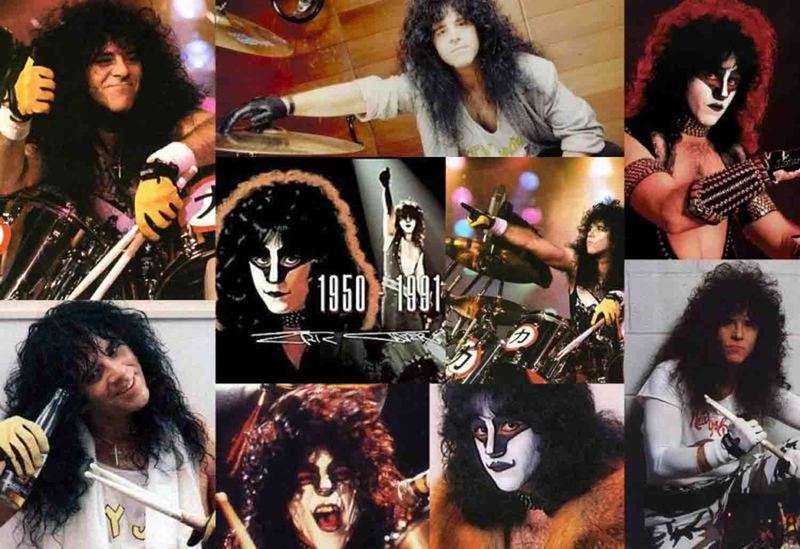 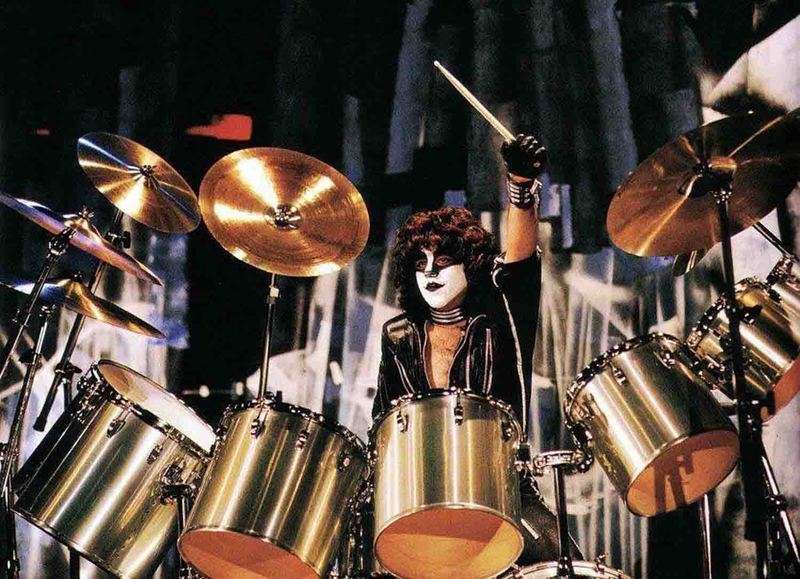 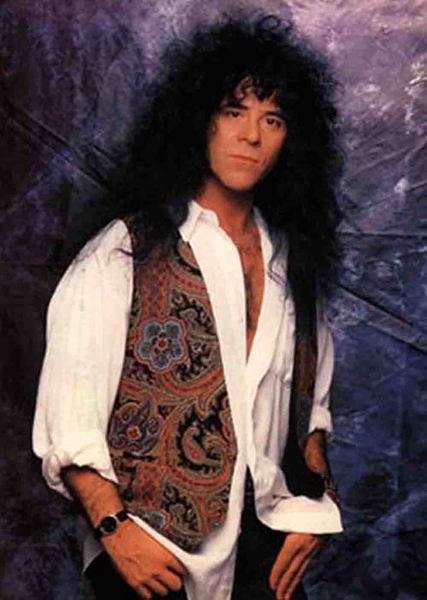 Paul Charles Caravello (July 12, 1950 – November 24, 1991), better known by his stage name Eric Carr, was an American musician and multi-instrumentalist who was the drummer for the rock band Kiss from 1980 to 1991. Caravello was selected as the new Kiss drummer after Peter Criss departed, when he chose the stage name "Eric Carr" and took up The Fox persona. He remained a member of Kiss until his death from heart cancer on November 24, 1991, at the age of 41. Carr's first album with Kiss was 1981's Music from "The Elder", which marked a departure for the band toward a mystical art-rock direction. One of Carr's contributions to the album, "Under the Rose", is one of the few Kiss songs written in 6/8 time and featured a Gregorian chant-style chorus. Later, he would also have cowriter credits on "All Hell's Breakin' Loose", "Under the Gun", and "No, No, No", amongst others. Carr said he found writing lyrics harder than writing music.Besides drumming, Carr also played guitar, bass guitar and piano and sang background vocals. Occasionally he sang lead vocals, such as on "Black Diamond" and "Young and Wasted" live with Kiss.[9] His first lead vocal in the studio was a re-recording of "Beth" (a song originally sung by Peter Criss) for the 1988 compilation album Smashes, Thrashes & Hits. Carr recorded his version of the song in the same room in the Record Plant where the song was originally recorded, using the same backing track as Criss.In 1989, he recorded a demo with Kiss lead guitarist Bruce Kulick. Carr wrote the music, played bass and drums, while Kulick played guitar. As Carr was not a proficient lyricist, he presented the demo to Simmons with the words to Marvin Gaye's 1965 classic "Ain't That Peculiar". Simmons wrote new lyrics, which Carr recorded for the subsequent Hot in the Shade release. The song was released as "Little Caesar". He performed the song a few times, but it wasn't performed beyond the first month of the tour. Carr's last live performance with Kiss was November 9, 1990 in New York City, at Madison Square Garden.Carr's last recording with Kiss was for the song "God Gave Rock 'N' Roll to You II", which featured him on backing vocals. The last time Carr worked with Kiss was in July 1991 when Kiss filmed the video for "God Gave Rock 'N Roll to You" with Carr playing drums. Carr's last public appearance with the band was at the MTV Video Music Awards in September 1991.

This 20th anniversary commemorative collection features 18 rare recordings including unreleased music, live performances, remixes, and interview clips.To commemorate 20 years since the late ERIC CARR passed away, her sister with the help of musician friend, released this CD titled “Unfinished Business“, featuring 18 rare Carr recordings including an unreleased version of “Shandi” with Eric on vocals. As requested, here’s a pristine CD audio of the album, not easy to find in good quality.Eric Carr was an intricate part of Kiss for over 11 years. His powerful drumming rocked the music world through the 80s and he is still an influence on drummers and rock fans alike.This special commemorative CD release features rare Eric Carr recordings including unreleased music, live performances, interview clips and more. Guests include members and former members of KISS, Twisted Sister, Danger Danger, Seether, ZO2, Europe, and more.A testament to a man whose personality and heart were as big as his enormous talent…“Unfinished Business” is nice and nostalgic compilation of Eric Carr’s demos and songs. He was a great and complete artist most the time shunted aside by Gene & Paul.Some tracks here really worth the listen, such as the version of “Shandi” used at Eric’s audition for Kiss drummer / alt. vocalist slot, presented here with a new, low-key and groovy accompaniment.Other unreleased goodies are the powerful “Dial L For Love” and “Elephant Man”, the presence of Danger Danger’s Ted Poley providing lead vocals on the catchy “Just Can’t Wait”, and Bruce Kulick plus ex Europe Kee Marcello guitar contributions.Essential for Eric Carr / Kiss fans and rock collectors in general.