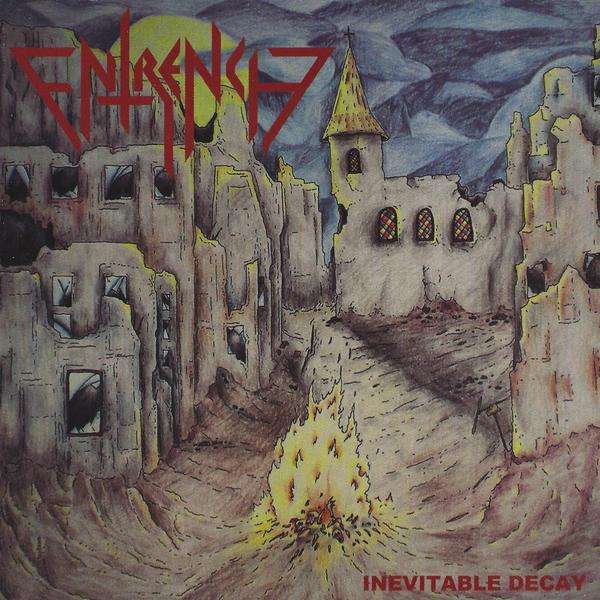 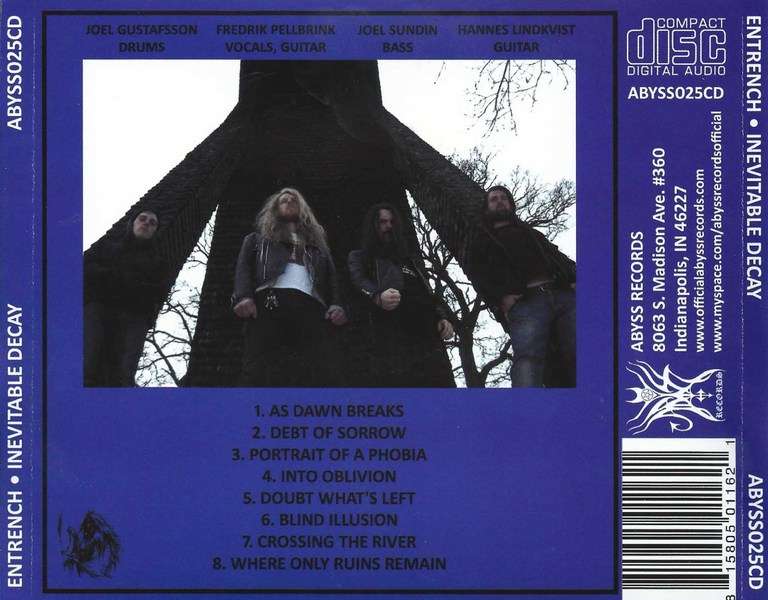 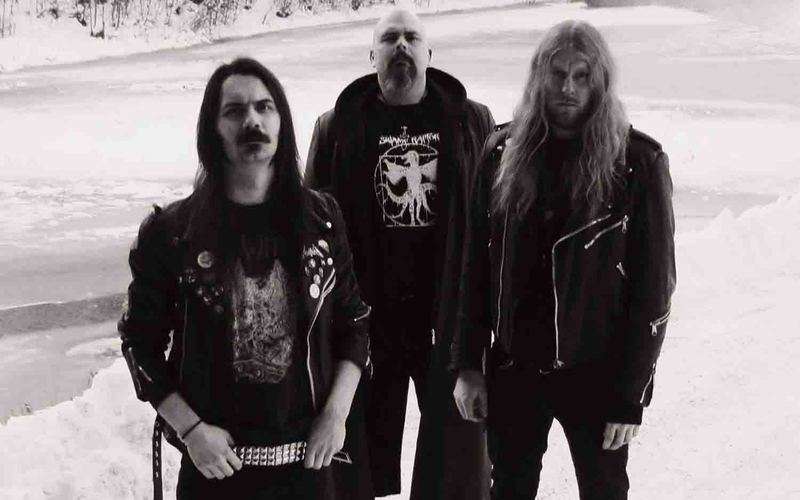 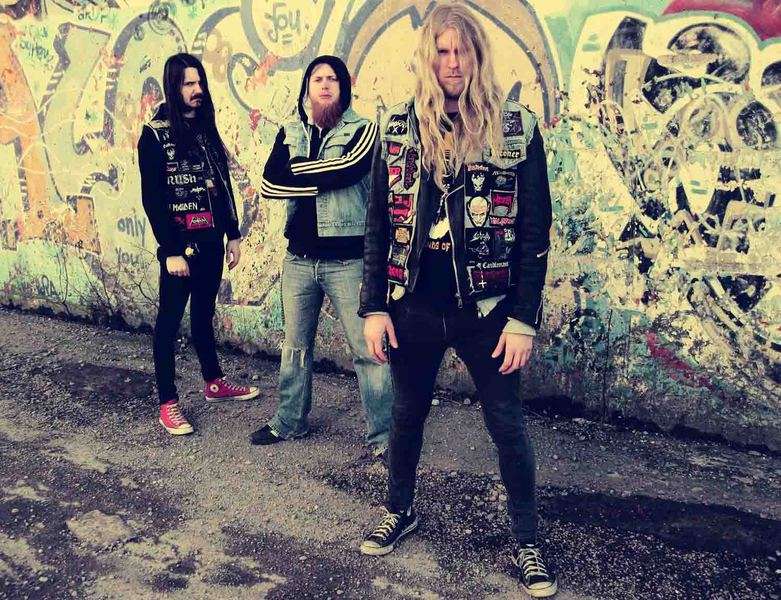 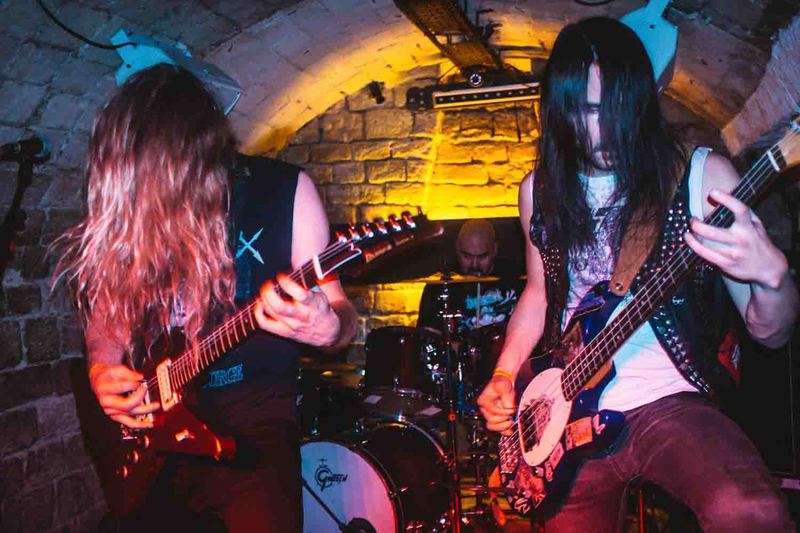 Formed in 2005. Entrench is a Death/Thrash band from Västerås, Sweden.Current releases: 2006 - Untitled (Demo) 2006 - Demo 2006 (Demo) 2007 - Into Oblivion (Demo) 2008 - Trails Of Death (Demo) 2009 - Demo 09 (Demo) , Inevitable Decay (2011), Violent Procreation (2014) , Through the Walls of Flesh (2017).ENTRENCH hail from Västerås, a town in central Sweden very close to Stockholm.Their musical style can be defined as Teutonic Thrash Metal. From the album's artwork to the album sound production, songwriting etc., everything has that old school feeling.If you are a diehard fan of that approach like old KREATOR, DESTRUCTION or SLAYER, this album is for you.

The first thing that struck me about the Entrench debut was the gaudy and colorful cover art, which to some might seem disgusting or tasteless, but to this old timer, brought me back to the halcyon days of the 80s when a lot of bands on the underground circuit simply did not have the scratch or pull to get some masterpiece illustration or painting for their recordings (see Anvil Bitch, etc.) Blasted out buildings of antiquity, a straight red logo and nothing pretentious or presumptuous anywhere in sight. This is all too fitting for Inevitable Decay, an album which does its damned best to recapture the virile energy of the German band Kreator during their prime of the mid 80s period, from the vocals to the intensity of the riffing.Now, it's not 100% Kreator worship, but it's damned close. You'll also hear a lot of their fellows Destruction in the crisper guitar tone, plus the belligerent bluster of Sodom, but in general, there is an indisputable, highly Germanic retrospective element happening here. Rather than just settle into the shadows as a tribute, though, Entrench actually implement some thunder and lightning to their compositions, so despite their obvious derivation they've got an admittedly fun fucking debut album with this, and one that I've been listening to several times just because I truly rue the fact that there aren't more bands today doing SOMETHING with this sound (even the progenitors have moved onwards). The many demos this Swedish band recorded prior to the full-length have obviously sharpened their skills and dedication, and Inevitable Decay must now join Havok's Time is Up as one of the premiere 'retro' thrash recordings of the year 2011. So, there. I have decreed it! It must be true! Oh, stop snickering in the background.Like almost every good thrash record, this one functions due to not only the bleeding speed and proficiency of its musicians, but also the varied pacing dynamics which make it feel like a pure 80s effort, since there were few bands in that day that would go 100% in one direction without the rock influence of multiple tempos, power ballads and such. Entrench can thrust along with intricate numbers like "As Dawn Breaks" and "Doubt What's Left" which recall Pleasure to Kill, Kill 'Em All and Sentenced to Death at their most blistering, but they also tone down the speed for some great mid-paced chops throughout "Into Oblivion", "Portrait of a Phobia" or "Blind Illusion" (try NOT banging your head out to that last one). But what really rules about this band is that such obvious effort has been placed in every track...none of these tunes feel like 'filler', even if they can all be traced back to the 25-year lineage of the genre.Inevitable Decay does not 'advance' or expand the thrash metal genre. This is not Vektor, who have a good chance of offering us some progression in places. But for what they do, Entrench are damned good at it, and if I am to sit through a record which celebrates what must be my favorite of all sub-genres, then I want it to be serious, energetic and durable. These songs aren't all about fucking sluts, drinking beers and being 'OMG WE'RE SO THRASH'. This is not the work of petulant children, but guys who really love those old records and want to do honor by them. With such a cavalcade of blazing riffage and authentic, thin yet potent production, they have the potential to quicken paces and disable pacemakers everywhere. Inevitable Decay is not an original or innovative work, but in every other category of consideration, it kicks asses straight into the goal.