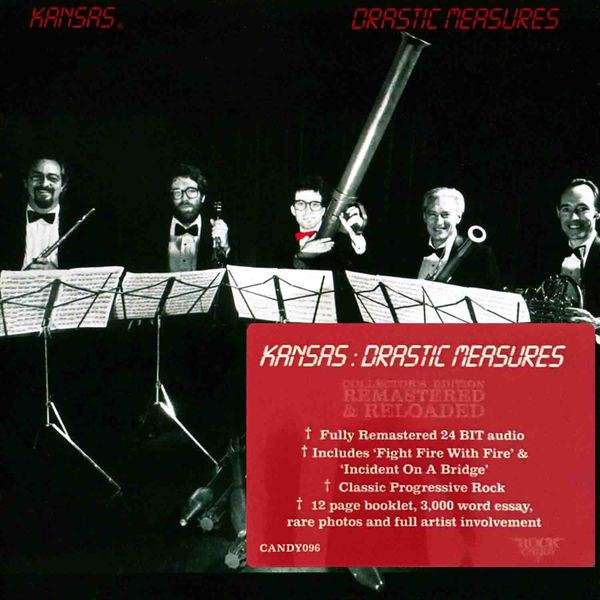 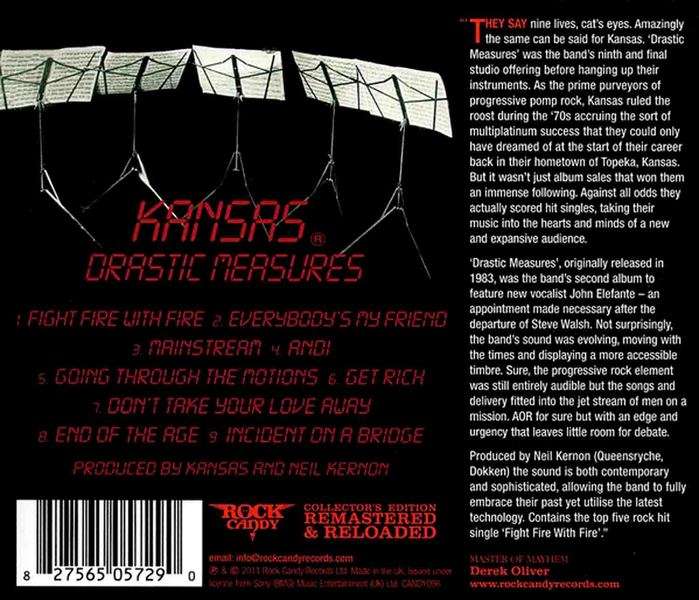 Kansas is an American rock band that became popular in the 1970s initially on album-oriented rock charts and later with hit singles such as "Carry On Wayward Son" and "Dust in the Wind".The band has produced eight gold albums, three multi-platinum albums (Leftoverture, Point of Know Return, The Best of Kansas), one platinum live album (Two for the Show) and a million-selling single, "Dust in the Wind". Kansas appeared on the Billboard charts for over 200 weeks throughout the 1970s and 1980s and played to sold-out arenas and stadiums throughout North America, Europe and Japan. "Carry On Wayward Son" was the second-most-played track on US classic rock radio in 1995 and No. 1 in 1997.In 1969, Lynn Meredith, Don Montre, Dan Wright and Kerry Livgren (guitars, keyboards, synthesizers) were performing in a band called The Reasons Why in their hometown of Topeka, Kansas. After changing the band's name to Saratoga, they started playing Livgren's original material with Scott Kessler playing bass and Zeke Lowe on drums.In 1970, they changed the band's name to Kansas and merged with members of rival Topeka progressive rock group White Clover. White Clover members Dave Hope (bass) and Phil Ehart (drums, percussion) joined with Livgren, vocalists Meredith and Joel Warne, keyboardists Montre and Wright and saxophonist Larry Baker.This early Kansas group, which lasted until 1971 when Ehart, Hope and some of the others left to reform White Clover, is sometimes referred to as Kansas I.Ehart was replaced by Zeke Lowe and later Brad Schulz, Hope was replaced by Rod Mikinski on bass, and Baker was replaced by John Bolton on saxophone and flute. (This lineup is sometimes referred to as Kansas II, and 30 years later would re-form under the name Proto-Kaw.) In 1972, after Ehart returned from England (where he had gone to look for other musicians), he and Hope once again reformed White Clover with Robby Steinhardt (vocals, violin, viola, cello), Steve Walsh (vocals, keyboards, synthesizers, percussion) and Rich Williams (guitars). In 1973 they recruited Livgren from the second Kansas group, which then folded.[6] Eventually they received a recording contract with Don Kirshner's eponymous label and decided to adopt the Kansas name.

Here’s the Rock Candy Records remastered & reloaded release of KANSAS 1983’s album “Drastic Measures“, the band’s ninth and final studio offering from the first era before hanging up their instruments.“Drastic Measures” was the band’s second album to feature new vocalist John Elefante – an appointment made necessary after the departure of Steve Walsh. Not surprisingly, the band’s sound was evolving, moving with the times and displaying a more accessible timbre.Sure, the progressive rock element was still entirely audible but the songs and delivery fitted into the jet stream of men on a mission. AOR for sure but with an edge and urgency that leaves little room for debate.This RC remaster is bright and clear, however not including bonus tracks. We added our own, a ‘0dayrox extra’, the song Kansas recorded at the same sessions and included a year after into their 1984’s ‘The Best of Kansas’.As the prime purveyors of progressive pomp rock, Kansas ruled the roost during the ‘70s accruing the sort of multi-platinum success that they could only have dreamed of at the start of their career back in their hometown of Topeka, Kansas. But it wasn’t just album sales that won them an immense following. Against all odds they actually scored hit singles, taking their music into the hearts and minds of a new and expansive audience.Kerry Livgren only contributes just three songs to the album (the more prog oriented), compared to six composed by John and Dino Elefante.On the plus side the band had drafted in producer Neil Kernon on the back of his success with several Hall & Oates albums, snagging him just before he would become synonymous with commercial hard rock bands like Dokken, Queensryche and Autograph.Kernon actually did a great job with the material on “Drastic Measures”, giving Kansas a punchy, sophisticated AOR sound they’d never had before.The powerful opener “Fight Fire With Fire” is a classic slice of inventive AOR that the band still play occasionally today, and “Don’t Take Your Love Away” has the kind of light and shade that they’re known for.Other Elefante compositions included the memorable melodic ballad “Andi”, whilst the hi-tech of “Get Rich” is very modern for the era, where Kernon’s touch is evident.“Everybody’s My Friend” and “Incident On A Bridge” are both urgent AOR numbers with heavy keyboards. The three Livgren songs tell a tale of their own, being “End Of The Age” the more prog-friendly song but with accessible harmonies.“Drastic Measures” is definitely a mid ’80s AOR rock album with great melodies and big keyboards, in the vein of Balance and on many passages, Journey and alike. The modern and brilliant production by Neil Kernon is now enhanced with a huge sound and extra clarity with this brand new remaster.A must have for any ’80s AOR fan.