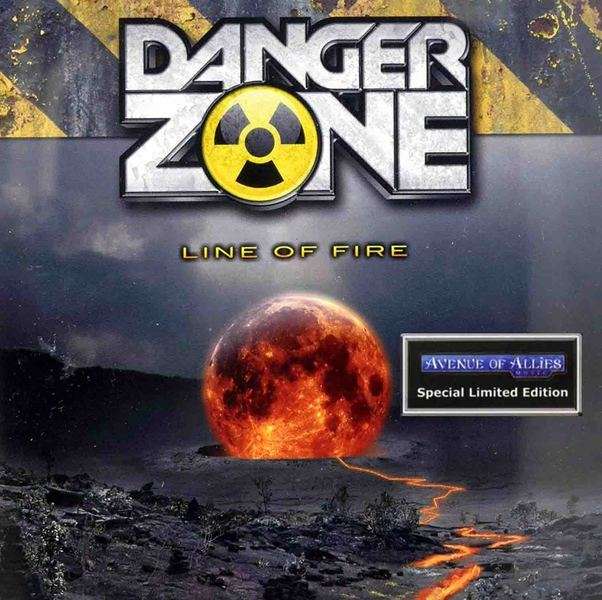 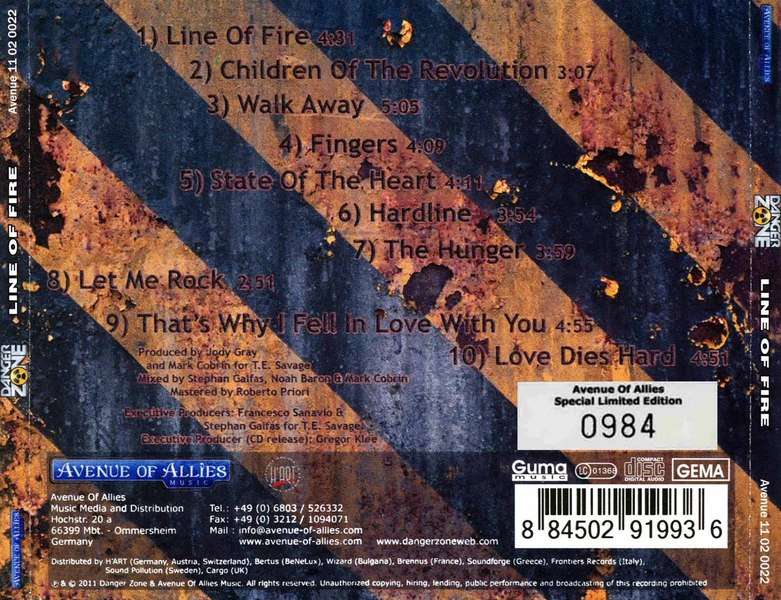 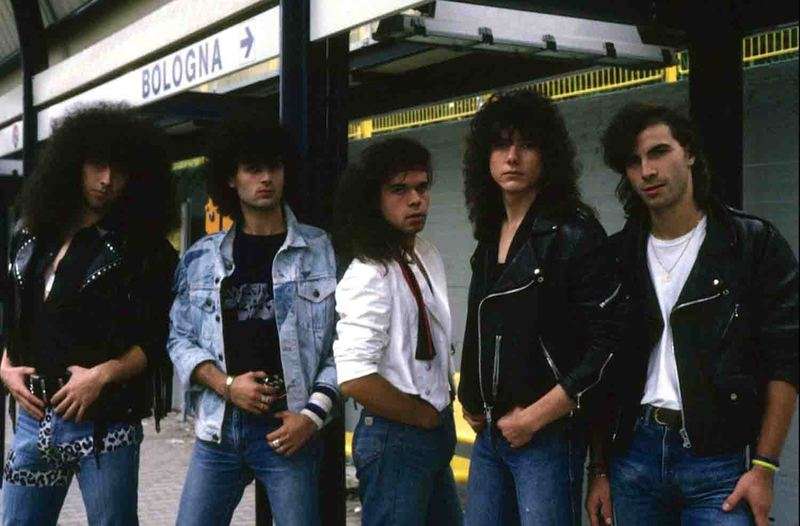 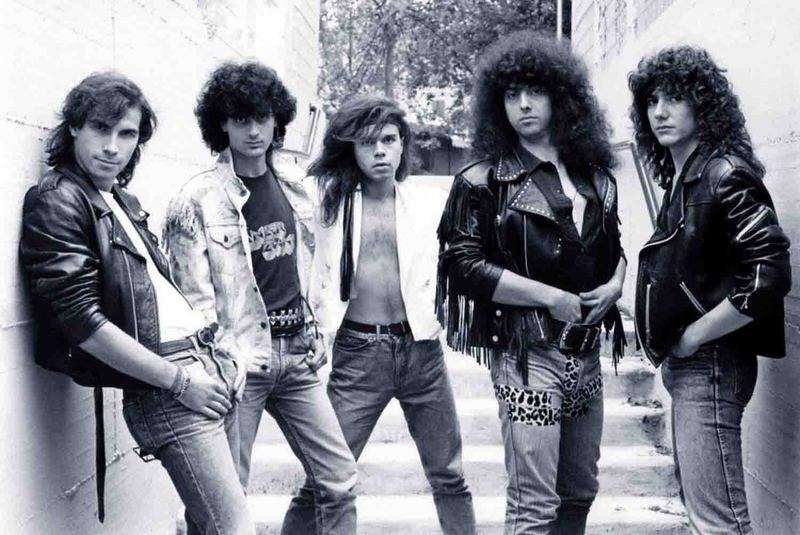 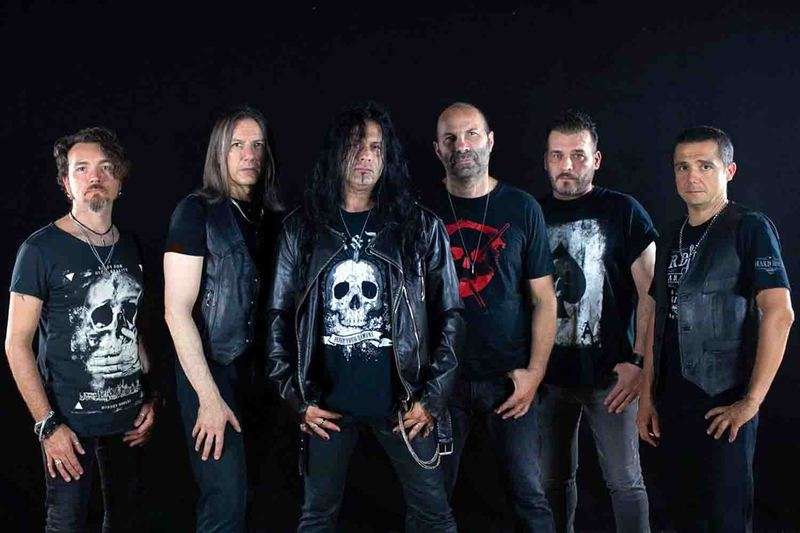 When guitarist Roberto Priori started the Italian band DANGER ZONE in the early 80s a long hard road lay ahead of them. In 1984 they released the LP “Victim Of Time”.In the spring of 1988 DANGER ZONE eventually opened up for Heavy Metal legends Saxon in Verona, Italy and following the performance promoter and manager Francesco Sanavio offered DANGER ZONE a production deal which included the plan to break into the US market. Almost a year later in May 1989 the new album "Line Of Fire" began to take shape when executive producer Stephan Galfas (Meat Loaf, Savatage, Stryper, John Waite and Saxon) got involved and his colleagues Jody Gray and Mark Cobrin, both successful with the Japanese Hard Rock outfits Loudness and EZO, took over the production duties.The band also recorded a Hard Rockin' version of the T. Rex c1assic "Children or the Revolution" and business reasons led them to record two more cover versions, "Thet's Why I Fell In Love With You" by Country singer Eddie Rabbitt and "Let Me Rock" from the 1984 one-off release by Chequered Past, a band featuring singer Michael Des Barres, ex-Sex Pistol Steve Jones and Blondie's rhythm section. The band members own cornpositions showed their great talent to write catchy Melodic Rock songs with a harder edge with equally great instrumental performances of Roberto Priori on lead guitar, Stefano Peresson on guitars and keyboards, Stefano Gregori on bass and Paolo Palmieri on drums. The rough vocals of Giacomo Gigantelli fit tracks Iike "State or The Heart", "Hardline", "Love Dies Hard " and "Fingers" perfectly. On the latter one singer and model Grace Jones can be heard doing background vocals.Following the studio recordings DANGER ZONE began rehearsing for Iive shows and the guys prepared their move to Los Angeles . But due to endless negotiations with an US label the band began to fall apart and money started to run short, forcing the remaining band members to sell part of the equipment to finally make it across the ocean. When DANGER ZONE finally started to build up a good reputation by touring the Club circuit in Southern California for several months the L.A. Scene was hit very hard by the Grunge wave, forcing DANGER ZONE to give up their big dream, call it quits and return back home to Italy.As the years went by “Line of Fire”reached an underground cukt status when Rock magazines fanzines and dedicated fans of the band continuosly demanded its release.In 2011 the album finally sees the light of the day carefully remastered from the original source by Roberto Priori.September 2012 DANGER ZONE announce the signing of their brand new album “Undying" .The band already got back together in 2010 working on new material and rehearsing for live shows. During 2011 the guys worked continuously on new songs and played several gigs in Italy. Before original DANGER ZONE band members Roberto Priori (guitars), Paolo Palmieri (drums) and Giacomo Gigantelli (vocals) entered the studio they added new bassist Roberto Galli to their line-up.  The album has been produced by Roberto Priori and Jody Gray, one of the key members of the production team of the “Line Of Fire” album .To promote this release, the group played several shows in Italy and some Summer Festivals.In March 2014 they released a single and a video of the E.Z.O.'s song "Fire Fire", a tribute to a legendary Japanese band of the 80's, now featuring new bass player Matteo Minghetti.While keeping playing live, the Danger Zone started to work on the compositions for a new album. The sound now turned out to be more melodic than before so they decided to add Pier Mazzini (Perfect View) and Whitesnake's Michele Luppi on keyboards.In Summer of 2015 the Italians started the recordings with Roberto Priori and Jody Gray producing at the PriStudio in Bologna; as before the engineering duties were handled by Roberto himself.The whole album has a very positive energy and attitude. Hard Rock and AOR were mixed together and as a result, the band feels even better presented than it was never before.That’s why they decided to call the album "Closer To Heaven", it marks a step towards their own identity and sound.

Signing a deal after impressing whilst supporting the mighty Saxon in Italy in 1988, Italians DANGER ZONE headed off to Los Angeles to play some well-received gigs and begin work on their second album (a first, ‘Victim Of Time’, had been released in their home country in 1984) with some of the knob-twiddling heavyweights responsible for albums by the likes of Stryper, Meat Loaf, Loudness, EZO.But protracted label negotiations and the illegitimate birth of the grunge beast meant that Danger Zone, like so many of their bouffant brethren, walked the short path to obscurity at the dawn of the Nineties.That second album, ‘Line Of Fire’, recorded back in 1989 has become something of a lost treasure to melodic rock fans who have continuously demanded the album finally see release.After more than twenty years, leader and guitarist Roberto Priori – which remains firmly in command of that dream called Danger Zone – with the help of a reissue label, finally bring us their sophomore album “Line Of Fire”, strictly limited to 1,000 copies, numbered.Opening track, title song “Line Of Fire” begins with a bout of guitar widdling in the style of Eddie Van Halen before turning into a 100% american melodic rocker. A great song with an awesome chorus.The second track is the first of 3 covers included on this ten track affair; 1972 T. Rex’s classic “Children Of The Revolution”. A very good version, heavier than what you’d be used to hearing, with a blistering fretwork over it but the chorus brings it all home.“Walk Away” is a power ballad that confirms the leading role of singer Gigantelli, with his slightly hoarse voice can lift any song to the next level.The interesting “Fingers” is a mid-paced, sexier rocker that features the guest backing vocals of none other than the infamous Grace Jones on what turns out to be the album’s stand out track.“State Of The Heart” is another first class melodic rock tune with a contagious chorus, sounding a lot like Ratt circa 1988. “Hardline” is also absolutely American, a Dokken-esque track with a fat bass line and catchy rhythm. The chorus arrangements reminds me Warrant too.The straightforward “The Hunger” with its frenetic pace is simple but effective. Next is the cover of Chequered Past (Michael Des Barres’ band) “Let Me Rock”, more chant-along than the original, with a Def Leppard arena-anthem vibe.“That’s Why I Fell In Love With You” is the last cover featured here, an Eddie Rabbitt’s original (a country-rock artist), and certainly has a southern rock /AOR feel, very cool mid-tempo ballad ala Van Zant circa 1985.“Love Dies Hard” wraps the disc in a very good form, this track is killer rocker in the Dokken style featuring a great guitar solo.“Line Of Fire” is a very good slice of classic Americanized melodic rock, played and recorded at professional standards. Singer Giacomo Gigantelli showed real talent when his pipes were fully warmed and lead guitarist Roberto Priori certainly had major guitar hero potential in his blurred fingers.After this release Danger Zone returned to the scene, now with two albums under their belt since, the last appeared few days ago, and a killer one for sure.