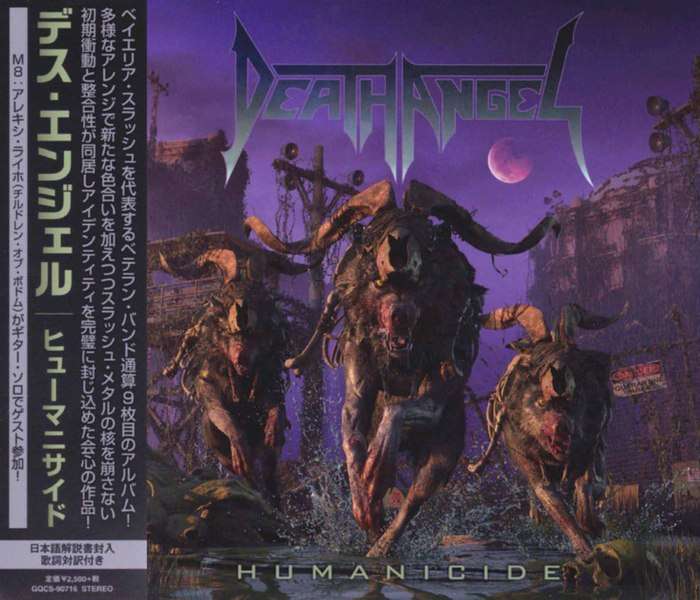 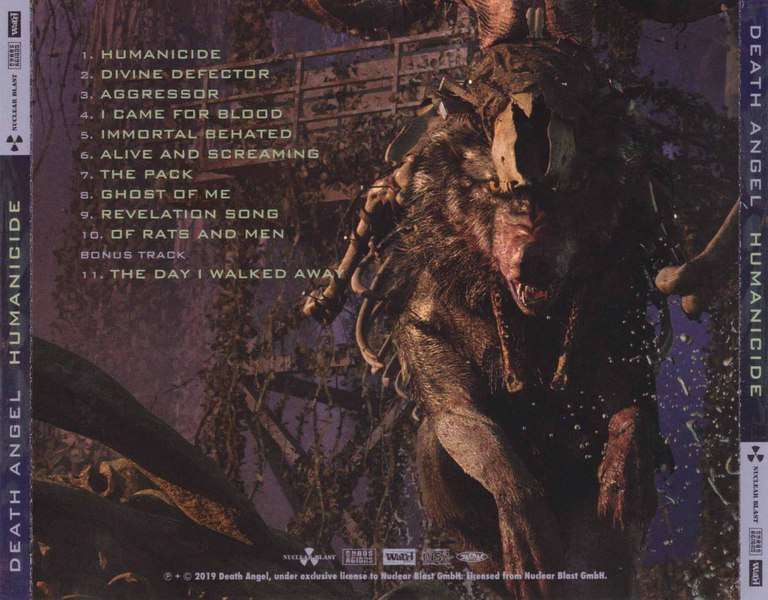 Death Angel is an American thrash metal band from Concord, California, initially active from 1982 to 1991 and again since 2001. Death Angel has released seven studio albums, two demo tapes, one box set and two live albums.Two independent releases, The Ultra-Violence (1987) and Frolic Through the Park (1988), attracted the attention of Geffen Records, which signed the quintet in 1989 and released their next album, Act III, one year later. While Death Angel was touring in support of Act III, drummer Andy Galeon was injured in a tour bus accident and needed more than a year to fully recover. This resulted in the band's break up in 1991. However, Death Angel reformed in 2001 (without original guitarist Gus Pepa) at the Thrash of the Titans benefit concert for Testament singer Chuck Billy. The band continues to record and perform today. Death Angel is currently working on a new album, which is due for release in April 2016.Death Angel was formed in the San Francisco Bay Area, California, in 1982 by cousins Rob Cavestany (lead guitar), Dennis Pepa (vocals, bass), Gus Pepa (rhythm guitar), and Andy Galeon (drums) -- all of Filipino descent. After considering a number of different names for the band, including Dark Fury, Cavestany and D. Pepa settled on the name Death Angel after coming across a book by that title in a book store.[3] In 1983, the band released their first demo, Heavy Metal Insanity, with Matt Wallace serving as producer. According to Mark Osegueda, the group was then "more like a metal band, more like Iron Maiden, Tygers Of Pan Tang and stuff like that," as the so-called Bay Area thrash movement was only just beginning to rise to prominence at the time and make its influence felt.Osegueda, a second cousin of the other four members who had been working as their roadie, became the group's vocalist in 1984 and performed his first show with the band on a bill with Megadeth in April of that year (at one of the four Megadeth gigs to feature Kerry King on guitar).Death Angel continued to play club gigs in and around the San Francisco Bay area for nearly two years, writing songs and refining their stage show. In 1986, the band recorded the Kill As One demo with Metallica's Kirk Hammett (whom they had met at a record store signing in 1983) as producer. The underground tape trading wave of the early 1980s led to extensive distribution of the demo, bringing the band wide attention. Osegueda later recalled that prior to the release of the band's first album, "We were playing in L.A. and New York, and the crowd was singing our songs, because there was this underground tape trading .... That's what keeps it alive, and I think that's absolutely wonderful."

David Byrne wrote in his book How Music Works “Something about music urges us to engage with its larger context, beyond the piece of plastic it came on-it seems to be part of our genetic makeup that we can be so deeply moved by this art form. Music resonates in so many parts of the brain that we can’t conceive of it being an isolated thing.” Creating music that resonates to the core of those who love heavy metal is what Death Angel have done with their masterpiece called Humanicide.The opening title track screams “I am a metal anthem”. Stadium-sized riffs which are guaranteed to incite fists flying into the air. This tune quickly accelerates setting the tone for much of Humanicide; electric imagery glowing within songs that project the fierce power of metal. Death Angel are at the top of their game on this album and you can feel it.Once again, Death Angel worked with Jason Suecof at Audiohammer Studios in production and Ted Jensen at Sterling Sound for mastering. This winning combination gives you clear articulation of each musician. In particular, you can hear the nifty fretwork of bassist Damien Sisson which is a treat. Too many metal albums end up losing the bass behind the chugging guitars. Here the unique voice of each player is given an equal punch. Whether it is the brilliant guitars of Rob Cavestany and Ted Aguilar or the driving percussion of Will Carroll, you get it all in spades.As I’m screaming my head off in the car with Mark Osegueda on “Divine Defector”, I’m sure passersby were thinking “Man, that dude is having a rough day”. Veins bulging and spit flying, I felt the indignant rage that Mark channeled in this song. His voice is razor sharp emanating strength and viciousness. Where other veterans in the metal arena are losing their edge with time, Mark sounds better than ever.A key feature of Humanicide is the diversity of the songwriting. You get wonderful cascading arpeggios, beautifully heavy chords and a shredding solo on “Aggressor”. Then Death Angel recalls the glory days of speed rock kings such as Motorhead and Saxon on “I Came For Blood”. Turning the page, we enter the haunting chapter of “Immortal Behated”. This mid-paced song features plaintive guitar as bookends for the heavy fist-pumping riffs within. The end offers a frenetic guitar solo that wanders off into somber piano and acoustic guitar.Heavy metal is known for the loyalty of its fans. This is especially true for fans of Death Angel. The fan club is rabid for all things Death Angel and the band has paid tribute to them with a song called “The Pack”. The tribal beat and pummeling chanting chorus forecast scenes of fans with faces glowing from the house lights and mouth stretched wide open in screams of approval.One of the most intriguing songs on Humanicide is the bonus track “The Day I Walked Away”. Echoed guitars and spoken lyrics give this song a futuristic Blade Runner feel. You can feel the consuming toxic rain wash away the person you use to be and exposing the carapace of tomorrow’s self. This exquisite song is a marvelous way to wrap up this album. Now flip that bad boy over and give it another spin.Humanicide by Death Angel is easily a candidate for best album of 2019. I will go further by putting this album into the top 10 all-time metal albums. Death Angel have tenaciously kept the torch of metal music lit through their last four albums culminating in this masterpiece. What every metal fan wants is compelling songwriting that invites you to cleanse your soul in the purifying fire of rage or lose yourself in the space between each note. Death Angel have painted a completely satisfying soundscape of furious music that will enthrall you for life.