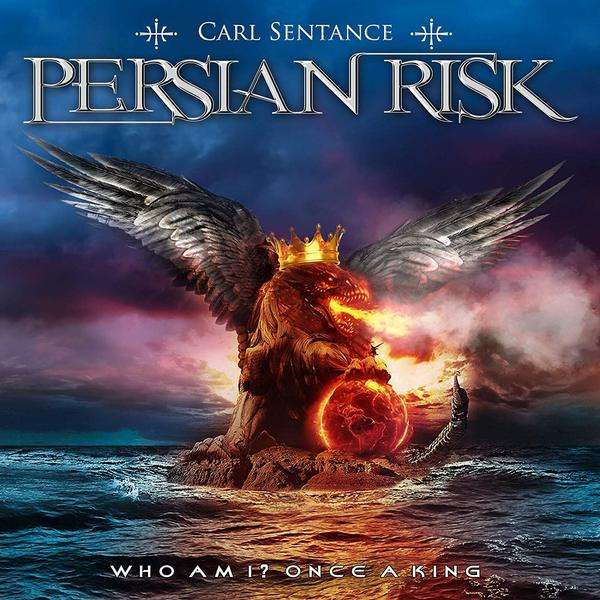 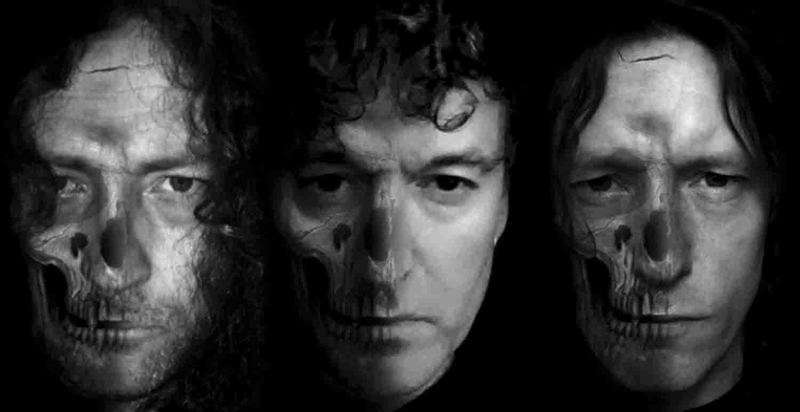 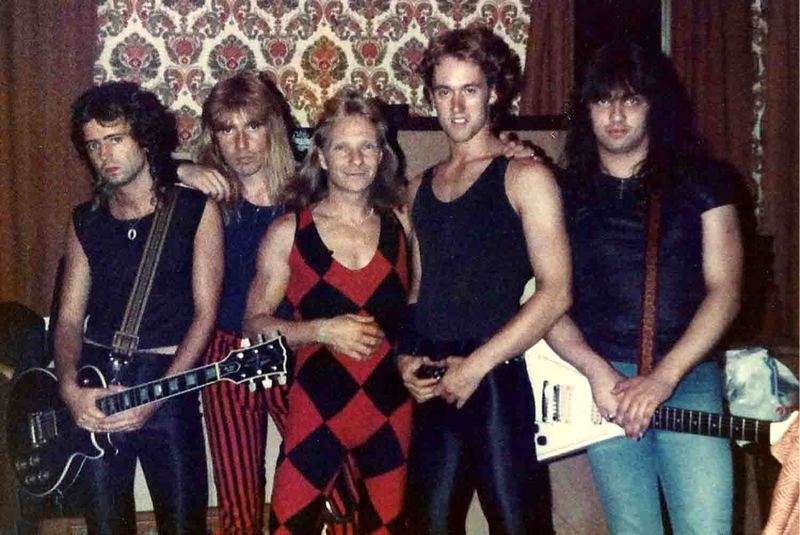 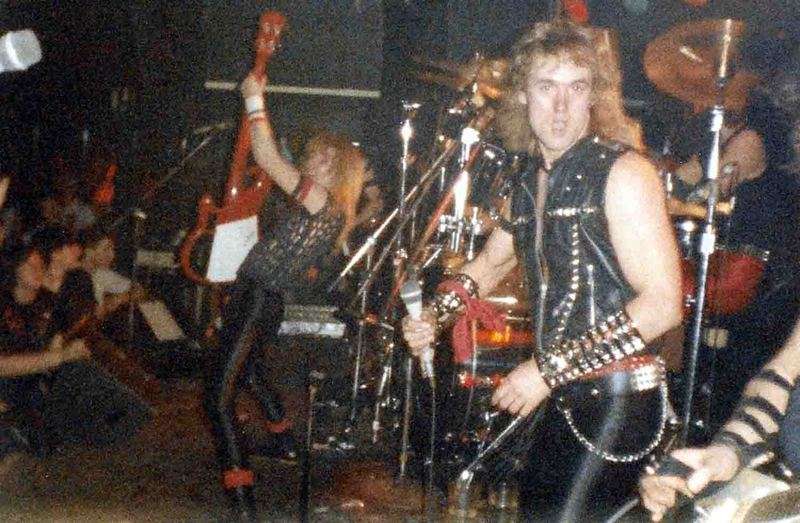 Persian Risk are a heavy metal band from the new wave of British heavy metal era formed in 1979 and hailing from Cardiff, Wales. The brainchild of ex-Stoned Soul Party guitarist Phil Campbell, he recruited vocalist Jon Deverill, second guitarist Dave Bell, bass player Nick Hughes, and drummer Razz. The group was active until 1986. In 2012, the band was re-activated by vocalist Carl Sentance albeit without the involvement of any other past members. In late 1980, Deverill was headhunted by the Tygers of Pan Tang and replaced by Carl Sentance, a former bandmate of Nick Hughes and Razz in Leading Star. New vocalist in place, Persian Risk issued the now highly collectible Calling For You b/w Chase the Dragon 7" in 1981 before sacking Dave Bell's replacement, Alex Lohfink, and soldiering on as a four-piece. The band made further headway by contributing the aforementioned Calling For You to the "Heavy Metal Heroes Vol.2" compilation (Heavy Metal Records, 1982) and a new cut, 50.000 Stallions, to the "60 Minutes Plus" cassette compilation (Neat Records, 1982), also issued on vinyl as "All Hell Let Loose" by Neat in conjunction with Italy's Base Records label in 1983. Adding to their tally, the band followed it up with the Ridin' High b/w Hurt You 7" single through Neat, which earned Risk their strongest reviews yet.It would turn out to be the final recording with drummer Razz who was sacked in late 1983. He was briefly superseded by Dixie Lee (ex-Lone Star, Wild Horses) before a more permanent replacement was a found in Steve Hopgood (ex-Chinatown, Shy). The band also added a new second guitarist, Graham Bath (ex-Sphinx). Persian Risk were dealt a significant blow when founding member Phil Campbell successfully auditioned for Motörhead, who would tap his old band for the support slot on their 1984 UK tour. Campbell's successor was Phil Vokins (ex-Tyrant, Wrathchild). Risk also signed a new record deal with London-based Zebra Records and issued the Too Different 12" EP in 1984 which saw the band temper their raw approach in favor of a somewhat more polished sound.That same year, Persian Risk made their one and only national UK TV appearance when the band performed three songs - Women In Rock, Rise Up, and Too Different - on Channel 4's ECT program. All three songs would later feature on their "Rise Up" LP which finally saw the light of day in 1986 on Metal Masters. By that time, the band had already disintegrated, the result of mounting frustration after years of hard work and failing to get that elusive big break. Nick Hughes exited to join Idol Rich, drummer Steve Hopgood co-founded Wild! (and later joined Paul Di'Anno's Battlezone and Killers as well as an early version of Jagged Edge), while Carl Sentance stepped in with Tokyo Blade on their 1986 European tour; he was also brought in as a guest vocalist by fellow Welsh act Tredegar for their 1986 debut album. Graham Bath, too, would later serve a stint with the DiAnno fronted Battlezone and Killers.In February 2012, vocalist Carl Sentance announced on his Facebook page that he had recorded seven new songs and re-cut four old Persian Risk tracks for inclusion on a new Persian Risk album, albeit without any of the original members involved. The participation of Deep Purple keyboardist Don Airey and former Thunder bassist Chris Childs was confirmed by Sentance.In a 29 July 2012 posting on the band's Facebook page, an August release was announced for the new album, entitled Once A King. On it, Sentance, Airey and Childs are joined by bassist Alex Meadows, drummer Tim Brown and the guitar duo of Danny Willson and Howie G. The above-mentioned album was released in October 2012; a limited edition vinyl version was issued by German label High Roller Records.The new Persian Risk played the "Hard Rock Hell" festival in Wales on 29 November 2012, with a line-up consisting of Sentance, Brown, Howie G. and former Blaze bassist Wayne Banks. They are also scheduled to appear at the "Keep It True" festival in Germany in April 2014. Their third album, named "Who Am I?", was released on 6 November 2014.

Escape Music is pleased to announce Carl Sentance's Persian Risk double album "Who Am I?" and "Once A King". Carl Sentance was born on June 28, 1961 in Loughborough, Leicestershire, UK and started his first band Leading Star playing guitar and singing in 1977. After participating in several local bands, he replaced John Deverill as a vocalist in the NWOBHM band Persian Risk.In 1981 he recorded his first single "Calling For You", the band then recorded "Ridin High" in 1983. In 1984 Persian Risk toured with Motörhead throughout the UK and appeared on The Tube prime time TV on Channel 4. In 1985 Carl recorded his first Persian Risk album, "Rise Up". At this point he received an offer from manager Smallwood Taylor to join Geezer Butler (Black Sabbath) as lead singer in his solo project. The collaboration lasted from 1986 to 1988 and created demo songs, videos and various bootlegs. Carl left the Geezer Butler Band in 1988 to join the Welsh band Monroe. In 1988 Carl decided to return to Cardiff and joined the band Tokio Rose. In 1990 he decided to move to Florida to form the band Ghost with Welsh ex- UFO and Waysted guitarist Paul Chapman. In 1995 Carl returned to the UK. From 1996 to 1999 he sang in various musicals, such as Judas in "Jesus Christ Super Star" and the American in "Chess". From 1999 to 2002 Carl became the lead singer of the Swiss hard rock band Krokus, with whom he recorded the album "Round 13". In 2004 he joined the Whole Lotta Metal Theatre Tour for 2 years. In 2006 Carl joined up with Deep Purple's keyboardist Don Airey for his solo project Don Airey and Friends and has co-writen with Don ever since. Albums include "A Light In The Sky", "All Out", "Keyed Up" and "One Of A Kind". In 2009 Carl recorded his first solo album, "Mind Doctor"! That led him to try and reform the original Persian Risk, but at the time the members were busy with other projects so Carl put a brand-new Persian Risk together and came up with two great albums "Once A King" and "Who Am I?". In 2015 Carl became the new singer for the band Nazareth after founding member Dan McCafferty had to retire due to illness. More recently Carl has recorded Nazareth's latest studio album "Tattooed On My Brain" (song credits include "Never Dance With The Devil", "Change", "State Of Emergency", "Silent Symphony" and "Don't Throw Your Love Away"). Carl is currently touring all over the world.