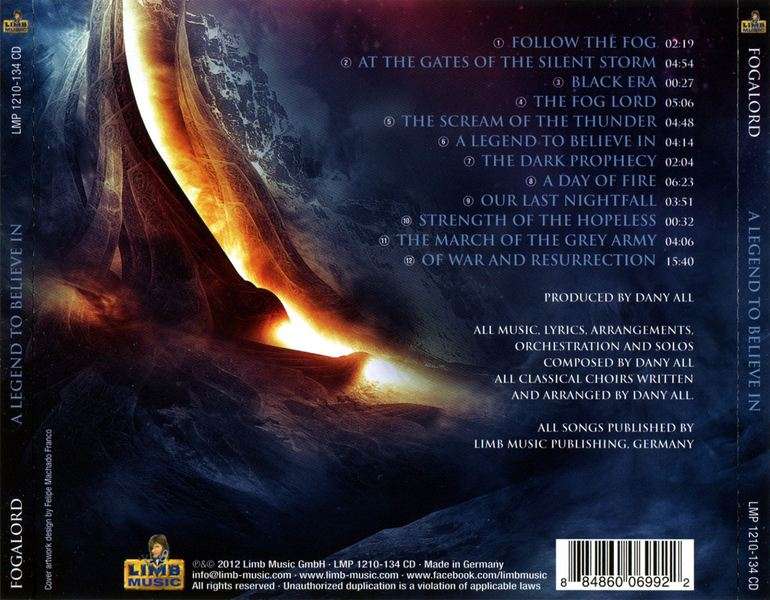 Fogalord, a symphonic and epic metal band, was created by Dany All (born in 1982 and already seen as keyboards player and composer with the Italian band Synthphonia Suprema with whict he released 2 albums, in 2006 and 2010) in 2007 supported by the guitar player Stefano Paolini. After 2 years of composition (and a 3-songs demo recorded in 2008) the recording of the debut album started. Dany called for the sessions many musician as special guest: the storic Rhapsody bass-player Alessandro Lotta, the members of Ancient Bards Claudio Pietronik and Martino Garattoni (bass), the Labyrinth, Necrodeath and Mastercastle virtuoso-guitar player Pier Gonella and many others.The choir scores was recorded by the 40 elements ''Corale Savani'', and give, together with the powerful orchestrations made by Dany, a mighty epic and majestic aura to the songs supported by the high-powered Synthphonia Suprema's rhythmic session: Lorenzo Costi (bass) and Francesco Zanarelli (drums).The debut album, called ''A Legend To Believe In'' consist in a concept story written by Dany, a legend of a warrior-god in a land of fog and mist and it is structured and composed as a Wagnerian opera: there are several ''leitmotiv'' (the FogLord's theme, the Fog's theme, the Sword's theme, etc..) that return during the saga when their subjects appear in the story: Dany was very fascinated by Wagner during his studies at the Music Conservatory (he studied Piano and Composition) and now is as devoted admirer of the German Maestro.''A Legend To Believe In'' was mixed at the well known Zenith Recording studio (Labyrinth, Oracle Sun, Shining Fury etc...) by Frank Andiver and mastered by Luigi Stefanini at New Sin Studio (Domine, White Skull, Athena, Dark Moor, Eldrtich, Secret Sphere, Vision Divine).The cover artwork has been designed by Felipe Machado Franco (Rhapsody, Blind Guardian, Rage, Iron Savior etc...).

If the fantasy-based Symphonic Power Metal of Celesty and Kaledon appeals to you, then Fogalord's A Legend to Believe In is going to be right up your alley. The band is Italian and the album is on Limb Music so you can be assured the sound quality and performances are all top-notch. The vocals are mid to high pitched but not annoyingly so. Fogalord put the accelerator to the floor from the outset and rarely let it up. Even songs that are meant to be breaks in the action have fast-paced parts. There are some occasional female vocals and alternative instruments (most likely sampled) but Fogalord stick to the basic formula with the guitars out front and the keyboards in the support role. This makes the album rather heavy for Italian Symphonic Power Metal, which is welcome.Fogalord play the style the way it is meant to be played. Their songs are exciting and energetic. The album contains nothing new but fans of this style should be all over A Legend to Believe In.