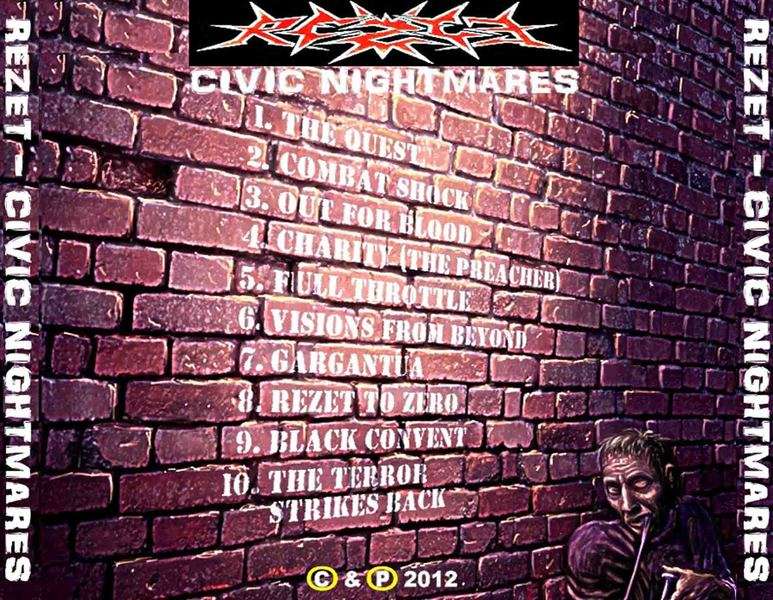 School mates Ricky Wagner and Thorben Schulz started the band Rezet in 2003 in Schleswig, Schleswig-Holstein, when they were only 12 and 13 years old. During the heydays of Nu-Metal, the two young guitarists were inspired by their heroes Metallica, Megadeth, and Slayer and began to realize their dream of having their own 80s speed and thrash metal band, together with friends from their neighborhood.In the early days, the band’s line-up changed repeatedly and their tastes in music didn’t seem to fit in with what was happening around them so they were considered exotic outcasts during that time. This, in fact, made Wagner and Schulz work even harder and Rezet quickly became an insiders’ tip.First shows were played with half the set consisting of cover songs (Metallica, Megadeth, Black Sabbath, and The Sex Pistols) and their fist demos were released in small quantities. Rezet’s quality enhanced with every show and every recording and their local fan base grew constantly. Wagner and Schulz quickly realized that music in general and Rezet in particular would become way more to them than just a hobby…When thrash metal had its big revival in 2007/2008, a lot of people found out about the young musicians from Northern Germany and were intrigued by them. So much so that their demos “Rezet To Zero” (2007) and especially “Toxic Avenger” (2008) were sold hundreds of times and the band’s bookings increased significantly – not only nationally but also internationally (starting with the Benelux countries).They measurably gained in importance in the metal underground scene – not least due to their intense live shows. Bavarian independent label Witches Brew was the first record company to offer the band a deal for their debut album in 2008. But when they supported the now big bands Portrait and Enforcer on a tour, Iron Kodex Records signed Rezet on the spot after having been mesmerized by the band’s speed riffing show.The release of Rezet’s debut album was scheduled for 2009 but was delayed because of various things (like artwork and line-up changes). In 2010, “Have Gun, Will Travel” was finally released on CD by “Iron Kodex Records” and later on on vinyl by “Iron Bonehead Prod.”. “Have Gun, Will Travel” got raving reviews all around the world and helped the band to get rid of the “please-not-another-thrash-metal-band”-status and be seen as an independent and timeless act by fans and critics alike. They tirelessly toured Europe and played legendary Wacken Open Air in 2009 and 2010, becoming one of the most important German “New Wave Of Thrash Metal” bands.Iron Kodex’ insolvency forced Rezet to find another label and they were signed by Twilight Vertrieb in the end of 2011. Rezet’s second studio album “Civic Nightmares” was released on March 30, 2012. On CD by Twilight Vertrieb and on vinyl by Metalizer Records. Technically more skilled and at the same time working with more melodies and musically matured, they once again convinced both critics and fans. They toured Europe again, played renowned festivals such as the Headbangers Open Air and strengthened their position within the speed and thrash metal scene. When Twilight Vertrieb closed their doors in 2012, Rezet worked independently for a while knowing that they would have to find a new label for their third studio album which they have been working on since 2013.Before beginning to record this album, they played another great number of live shows all around Europe and worked on their new line-up.In the second half of 2014 they began recording their third studio album “Reality Is A Lie”. Producer is Patrick Bieler, Rezet’s friend of many years and crew member of Revolverheld and Royal Republic. They managed to get metal and punk rock legend Harris Johns from Berlin on board for the mastering of the album. Johns has been working with bands like Helloween, Sepultura, Sodom, Tankard, Kreator, Voivod, Grave Digger, Therion, Slime, Ideal, and Einstürzende Neubauten since the late 70s. “Reality Is A Lie” will for sure start a new era for Rezet!

This is certainly not an album that is a part of the new wave of Thrash Metal that has been taking over the US and Western Europe. While most bands seek the aggressive power of the modern sound along with infliction not only taken from the old guard of the subgenre, there is a handful of bands that along with their appreciation to the past, find themselves breathing, composing and sound like the earlier years when Thrash Metal was still in its kiddy pajamas. I didn’t have the opportunity to listen to the German REZET’s debut album, “Have Gun, Will Travel”, very similar to the title of the old 1997 MEGADETH track, yet I will certainly come back to it, especially after I listened to the brainstorming menace of their new “Civic Nightmares” release, first via their new label of Twilight Vertrieb.I won’t start calling their music Progressive Thrash as it is certainly not in the likes of starts like WATCHTOWER or VOIVOD, yet REZET’s music is pretty complex but not in the way of many other Progressive Thrash groups. Though the first acoustic notes reminded me of old METALLICA, those developed to its counterpart, MEGADETH and another American bestial monstrosity in the image of old SLAYER. I know that MEGADETH had lots of changes throughout the years, but I am sure many will agree with me that the period of “Killing Is My Business… And Business Is Good”, “Peace Sells… But Who’s Buying”, “Show No Mercy” and “Hell Awaits” had a special magic to it. It was another stage of development in Speed Metal and its meld with Thrash. When I listened to REZET it wasn’t blasting with heaviness like the NWOBHM oriented Bay Area Thrash in the late 80s, it shared complex riffing along shifts between Heavy, Speed and even something that sounded like raw Jazz and Hard Rock licks.The intricacy of the music, mostly similar to the older Mustaine works after his departure from METALLICA, came alive in a rather underdone manner in REZET’s new album. Most of the lead guitar by Ricky Wagner& Thorben Schulzgestured memories of greatness along the fascinating riffing that went under those and as main rhythms. The rhythm section itself by Sascha Marth & Bastian Santen kept me dazzled by its diversity. It seemed to me that REZET didn’t settle for just being your regular Thrash Metal band; they went on being extreme in their journey for glory. Their peak performance led me to admire “Rezet to Zero”, “Charity (The Preacher)” (Amazing acoustic C part that was like a dream), “The Quest”, “Black Convent” and “Gargantua”.In the coming future I think that REZET should try to take a look on several of their rhythms due to the fact that there were moments where their extreme quest made me twitch because it was sometimes hard on listening to the material. Sometimes making things a little bit simple without making alterations which will cause brain hemorrhage would be way better. “Civic Nightmares” is a highly suggested release and I think that old era MEGADETH fans will be captivated by it.