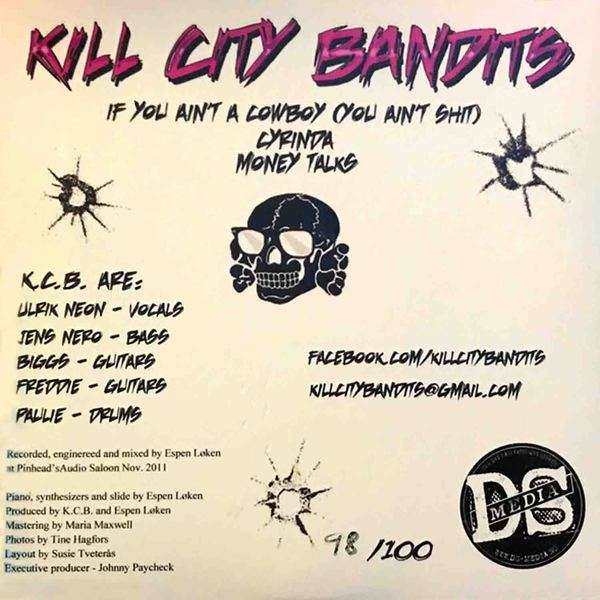 KILL CITY BANDITS is the rock n’ roll band, ugly looking metal bands and transparent Idol-plastic artists. Born on the streets of Oslo the five piece formed Kill City Bandits on the assumption that the world is in dire need of heroes. Not the clean-cut, glossy paper kind of mass consumption type of heroes – Kill City Bandits‘ heroes are dead serious, real and somewhat erratic. This approach to life shines through their creativity both in songs and live shows. But it also sets the context for more aspects of KCB, taking the rock and roll lifestyle back to it’s basics while facing the future with all guns blazing. “-This is greater than all of us. Like an occult hex, KCB controls us more than we control it. It’s the best curse one could ever have!” says Jens Nero, founding member and bassplayer.2011 saw the birth of their first EP – “How the West Was Wasted” – which had three strong songs already considered classics in the band’s repertoir. “Cyrinda“, “If you ain’t a Cowboy” and “Money Talks” never miss the normal setlist and neither does “Last Man Standing“, “Spritarnas Tango” and “Kiss Kiss” which featured on their second EP: “Echoes From Boot Hill” (2012). As of 2014 the band scored a publishing deal with Astma Records which helped push out the single “Dorian Gray” with a rocking B-side “Long Haired City Boy” on all digital platforms. The songs are also available with Dropcards which are sold on concerts and by request.Based on timeless rock n’ roll with a sharp-dressed package and a tongue-in-cheek attitude, KCB are the ultimate modern day cowboys to rattle your cage and take things to a level no-one dares. Kill City Bandits do not pretend or compromize as they regard such as waste of time and talent. They have released two EPs and played concerts constantly which have resulted in more attention, a growing international base of Fandits and others. As of Spring 2014 they are promoting the single “Dorian Gray” which is released on Astma Records.If you want to book KCB – or request just about anything – feel free to use the contact information and we will get back to you as soon as possible.

I can’t even tell how excited I was when I first heard “Cyrinda”, this song mixes HANOI ROCKS’ catchiness and beautiful tragic sense of melodies with The LORDS OF THE NEW CHURCH dark rock’n’roll spirit and Johnny Thunders’ melancholia. Can it be better? I don’t know… But this was more than a pleasant surprise to me in this day and age. The kind of band that reminds me that there is still hope for rock’n’roll.The KILL CITY BANDITS are the best band from Norway I’ve heard since the TRASHCAN DARLINGS, they only have released 3 songs so far but this is enough to make you think that these Northern pistoleros are on the right way. “If You Ain’t Cowboy” is a sleazy rock’n’roll song that DOGS D’AMOUR, CRYBABIES and early TIGERTAILZ fans will love for sure while “Money Talks” heads more toward the US hard rock’n’roll direction with street punk backing vocals.In a perfect world (or in the past!), The KILL CITY BANDITS would already be signed to a big record label. That’s a fact.