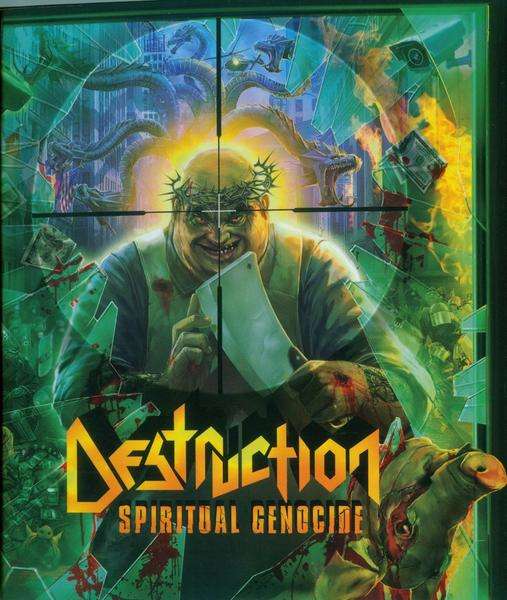 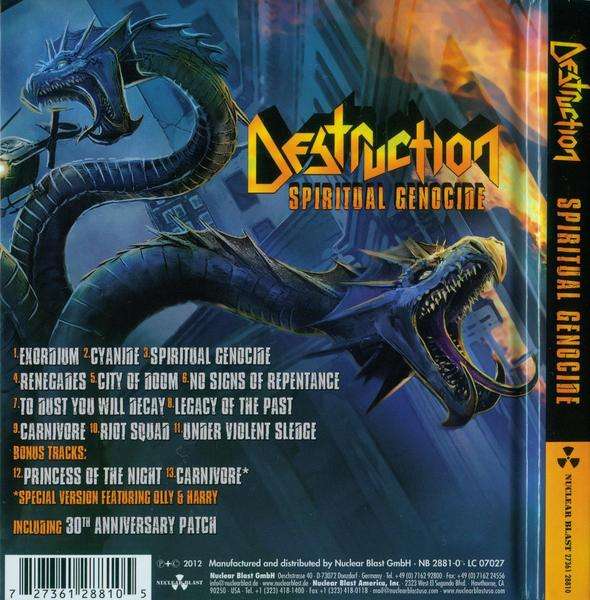 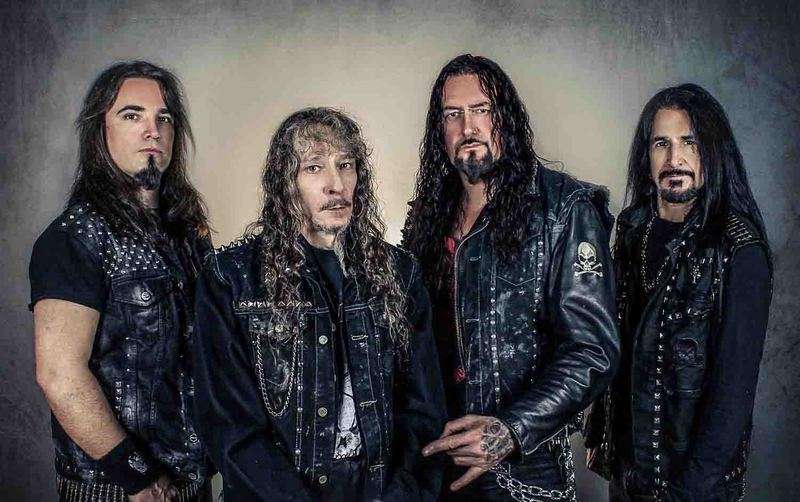 Destruction is a German thrash metal band. They are considered one of the "The Big Four" of the German thrash metal scene, the others being Kreator, Sodom and Tankard. Three of those four (Tankard being the exception) are often credited with helping pioneer black metal, by containing several elements of what was to become the genre. Destruction was originally named Knight of Demon, but changed their name in 1984. For most of the 1990s, Destruction was not signed to a record label and was forced to self-produce their albums until they signed a contract with Nuclear Blast in the 2000s.Inspired by Iron Maiden, Mercyful Fate, Motörhead and Venom, Destruction were formed as Knight of Demon in 1982. The original line-up featured vocalist and bassist Marcel "Schmier" Schirmer, drummer Tommy Sandmann, and guitarist Mike Sifringer. They soon changed their name to Destruction and released a demo titled Bestial Invasion of Hell in 1984. After this the group signed with Steamhammer Records and released an EP titled Sentence of Death later that year.Destruction released their first full-length album titled Infernal Overkill in 1985, followed by Eternal Devastation in 1986. The trio then added a second guitarist, Harry Wilkens, and released the EP Mad Butcher in 1987, followed by the full-length album Release from Agony (also released in 1987), then a live recording Live Without Sense in 1989, and Cracked Brain in 1990. In 1989, Schmier left the band and Mike Sifringer continued to release albums under the moniker of "Neo-Destruction".In 1999, Schmier rejoined, and things began to look up for the band as they signed a record deal with Nuclear Blast. They then released three more albums: All Hell Breaks Loose in 2000, The Antichrist in 2001, and Metal Discharge in 2003. The band would then sign with AFM Records and release Inventor of Evil in 2005. That album was followed two years later by the compilation of re-recorded songs Thrash Anthems (2007), and then a year later by D.E.V.O.L.U.T.I.O.N. (2008). In February 2011, Destruction released Day of Reckoning.A European tour with Overkill was scheduled for March 2011. Headlining dates in South America and North America were being planned for April and May.The band's thirteenth studio album, Spiritual Genocide, was released in November 23, 2012. Their next album, Under Attack, will be released on May 13, 2016.

Thrash legends DESTRUCTION were veritably reborn in the early 2000s, yet 2005's "Inventor of Evil" made people care about them again. Since then, DESTRUCTION hasn't so much as turned to behold the decimation left in their vapor trails. They just keep rolling. Fortunately for DESTRUCTION, nobody thinks much about their oddball numbers "Cracked Brain", "The Least Successful Cannonball" and the "Destruction" and "Them Not Me" EPs except to groan in reflection before limbering up their neck muscles for anticipatory headbanging. Thus we'll leave Schmier's inexplicable brief ejection in 1989 and the band's temporary downfall as anomalies.For their 30th anniversary, DESTRUCTION celebrates with a vengeance on "Spiritual Genocide", one of the fiercest and rhythmic albums they've ever laid down. Considering their last album, "Day of Reckoning", still feels like yesterday, "Spiritual Genocide" could've gone down in flames as a rush job. However, a large reason for "Spiritual Genocide"'s relentless popping pistons is the addition of new drummer Wawryzyniec "Vaaver" Dramowicz. Vaaver's metrical feels for thrash and groove turns good material into nearly-spectacular. He's the Godzilla of double hammer on the title track and "Under Violent Sledge". Thus "Spiritual Genocide" is a cleaver-swinging party for not only The Mad Butcher, but for Schmier and Mike Sirfinger, who might've only released a staple album without this hefty upgrade behind their backs."Cyanide" nearly over-exerts itself in its SLAYER-esque agitation, while "City of Doom" unmistakably sounds like "Rust in Peace"-era MEGADETH. Otherwise, the remainder of this album is pure Teutonic carnage as DESTRUCTION's fans have come to depend upon them to deliver. Mike Sirfinger's shredding acumen is understated throughout this album, but his bridges and dizzying solo segment on "City of Doom" are melted-down happy pills. Then Sirfinger's note-crazed solos on the title track serve as reminder he's as good as anyone on speedy six string."Spiritual Genocide", "Renegades", "No Signs of Repentance", "Riot Squad" and "Under Violent Sledge" wallop at nearly every turn and the pace is pressed with scant time to breathe. Only on "Carnivore" and "To Dust You Will Decay" does DESTRUCTION bother to slow down. Still, there are sorties of swiftness blasting throughout "Dust", while the mid-tempo smack of "Carnivore" allots for a gnarly solo sequence that projects nearly as loud as Schmier's housewarmed shrieks and ralphs."Legacy of the Past" may come off like a creeper, but it quickly asserts itself into higher gear and in true spirit of its namesake, it rings of the "Release From Agony" and "Eternal Devastation" days. We can assume it was even recorded in analog and touched up digitally in spots since it carries down-tuned whispers behind the projection to give it an old-school feel. To kick up the fun factor, Tom Angelripper of SODOM, Andreas "Gerre" Geremia from TANKARD and Ol Drake from EVILE join in the frivolity. All this cut needed for a proper alumni kick was Mille Petrozza of KREATOR sidling up to the Butcher's cutting board. Nevertheless, "Legacy of the Past" is almost as fun as the all-star packed "The Alliance of Hellhoundz" from "Inventor of Evil".The initial press reaction to "Spiritual Genocide" has been mixed and those are just the spoiled times we're living in. So much has been recorded in metal at this point, a reliably heavy band such as DESTRUCTION is held accountable for the minutest imperfections or potential squanders. Contrary to some opinions, this album hardly squanders. Had "Spiritual Genocide" followed "Release From Agony" or "The Mad Butcher" EP, it would've been held in immediate regard. The fact an album this meaty, defined and brutal is subject to scrutiny seems pretty goddamned weird.