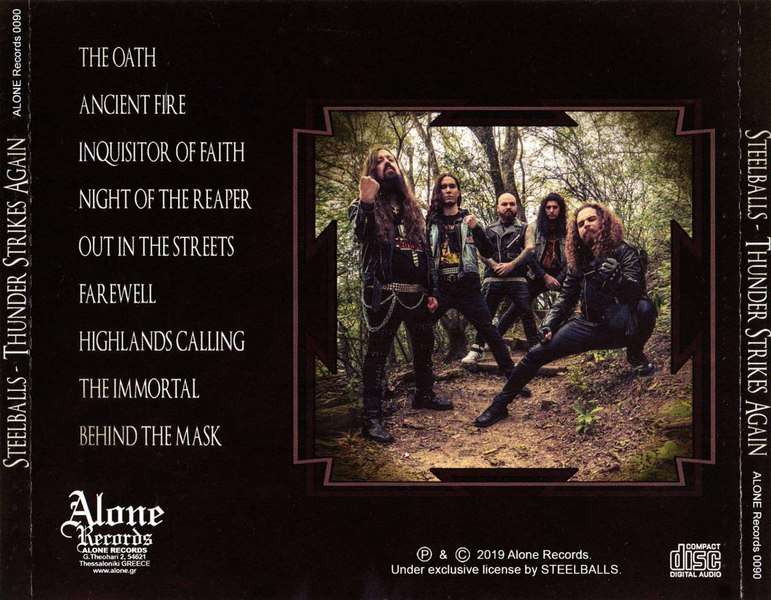 Power/Speed metal from Argentina in the vein of early-Helloween, Grave Digger, Blind Guardian, Running Wild and Manowar.Steelballs was founded in 2013 at Campana city in Buenos Aires (Argentina) by Juan Herrera, Paolo Rossi and Juan Pablo Churruarín. Due to unstable formations, the band added Lucas Galarza (guitar) and Nicolas Gimenez (drums) in the lineup. Almost a year without any activities, the band opted to get together and execute everything seriously.This time Mario Viggiani replaced the bassist Paolo (as he was not having enough time). With this new lineup, the band released their self-titled EP (containing three tracks) as limited edition CDR from NMT Productions in August 2016.

Reverting back to the 80s, we have this Argentinean circus of five who formed in 2013, and released their self-titled EP in 2016. The fact the quintet covered a Helloween track (`Starlight) on that particular opus kind of says a lot about the sound showcased on this nine-track affair. I'm still not sure if that production is intentional but if one didn't know this band, then they could be easily mistaken for an act from the murky 80s. What you get here is 80s metal worship; from the logo, to the cover art, to the denim to the sound, everything about this is nostalgia, except of course for the fact that mimicry can sometimes be cringeworthy. Thunder Strikes Again is most certainly that, but it does have qualities too. From the off, we get a Germanic power metal vibe... A bit strange for a South American act, but one cannot escape the obvious nods to mid-80s Helloween, especially as vocalist J.P. Churruarin bellows and howls amidst images of glinting blades, dented shields and those surging guitar attacks courtesy of axe-wielders Juan Herrera and Paolo Rossi — who none of you will confuse with the Italian footballer from the 80s! It's anthemic, epic sounding and bridges that gap between Teutonic, chest-pounding bravado and sturdy traditional metal glory. Can't argue with it, but of course it's been done a million times before. With that being said, for all of its ascending melodies and macho pouting, Thunder Strikes Again sounds rather sterile, a tad forced and yet remains fun as the melodic speed metal chunks are rolled out by the barrow load and fed to the warriors. If, like me, you grew up on heavy doses of Kick Axe, Heavy Load, and a whole host of those European spell-binding legions, then you're sure as hell gonna lap up this behemoth of sorcery. 'The Oath', 'Ancient Fire', Out In The Streets', 'Farewell' and the instrumental 'Highlands Calling' couldn't get more stormy and armoured, but again, hats off to the leads and the stirring grey rhythms conjured up by this party of five. And yes, there are times when I'm bedazzled by the gleaming beacons that transport me right back to the good ol' days. These guys really know how to sew together memorable riffs, whether they are well measured chug fests or high speed rapid fire passages, and they are delivered with an authenticity — however sceptical I want to be about it all. Steelballs can't surely take themselves seriously with such a moniker and my concern is that with such a name, people may pass them by. For all of its generic connotations though, this is at times a bloody good listen.

+ Video "Out in the Streets" (Official Video)