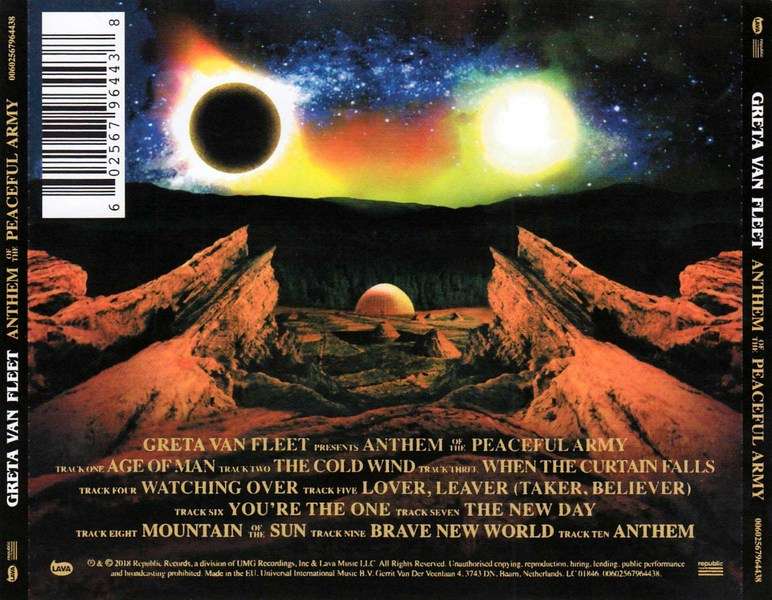 Firing twin barrels of arena-rock muscle and moving melodies, Greta Van Fleet is a modern rock & roll band rooted in the genre's strongest traditions: super-sized hooks, raw riffage and the sweeping vocals of a front man who was born to wail.The four-piece formed in Frakenmuth, Michigan, just outside of Detroit, where 20 year-old twin brothers Josh and Jake Kiszka began playing shows with their 17 year-old younger brother, Sam, and 17 year-old family friend Danny Wagner. Holding their practices in the Kiszka family garage and road-testing their songs onstage throughout Michigan, the four became a band of brothers whose songs mix classic chops with the thrill of teenage angst.From sing-along choruses to fiery guitar solos, Greta Van Fleet rounds up a highlight reel of rock & roll heroics. These guys aren't revivalists; they're looking ahead, breathing new life into a sound that's blasted out of car dashboards and living room stereos for decades.

Anthem of the Peaceful Army is the upcoming debut studio album by American rock band Greta Van Fleet. The album is scheduled for release on October 19, 2018, and follows the band's original two EP releases, Black Smoke Rising and From the Fires. The first single, "When the Curtain Falls", was released in July 2018. Greta Van Fleet love rock’n’roll way more than you do. The small town Michigan, USA group formed back in 2012, and is comprised of three brothers – Josh Kiszka, Sam Kiszka, and Jake Kiszka – and their pal Danny Wagner. After six years of old-fashioned grit’n’grind, the Frankenmuth natives (population 4,994, according to the 2010 census) are on the cusp of international glory.In November, the band will hit these shores for a smattering of sold-out shows across the country, and are being met by similarly swelling crowds elsewhere. Rock on, brothers!A new artist hitting the big time isn’t particularly shocking in this age of insta-culture, but put in the context of who they are and what they play, this is damn impressive. Cushty playlist spots, social media domination and chart success are opportunities that almost exclusively present themselves to pop and hip-hop stars. In the last decade, rock music has been pushed to the edges of the cultural zeitgeist. But that’s where Greta Van Fleet come in.This lot want to bring rock back to the masses. Speaking to Kerrang earlier this year, bassist Sam made clear their mission statement: “For a lot of our generation, people our age, this is a new sound. It’s absolutely brand new. I think it’s a new wave. I think this is what the future is. I think this is the future of music.”In some ways, he’s right. ‘Anthem of The Peaceful Army’ may well be the first time some teens hear sounds quite like these, though anyone who’s dug deep into their who’s who of rock music will know that there’s little original going on here. The formula for writing songs like these have not been drastically altered on ‘Anthem…’, as the ghosts of Hendrix, Cream, AC/DC and, most obviously, Led Zeppelin haunt this album. Occasionally you’ll feel compelled to blow the dust clean off some of the album’s most fuddy-duddy tropes.The Led Zeppelin comparisons are inescapable and this album does little to dissuade, or offer a drastically alternative sound. Back in March, Robert Plant called the band “Led Zeppelin I” and called leader Josh a “beautiful little singer, I hate him!” The band insist that they’re flattered to be recognised by the band, but are wary of being called “rip-offs” and earlier this year called the claims “bullshit”.Nevetheless, Plant’s trademark screech appears to have been reincarnated via lead singer’s Josh mighty howl, though the album’s most memorable moments are, in fact, its most restrained. Wistful bluesy-jams ‘You’re The One’, ‘Anthem’ and ‘The New Day’ all provide the band’s more soulful influences, as though Howlin’ Wolf and John Lee Hooker have taken the wheel with a more stripped-back songwriting approach.Ultimately, this is just a rock album that does exactly what it says on the tin. They are head-banging, pitch-altering rock songs that may not change the world right away, but they’ll give yer head a little wobble at the very least. The twists and turns of ‘When The Curtain Falls’ incite all the thrill and fear of watching a fire rage out of control, while the brute force on songs such as ‘Lover Leaver (Taker Believer)’ and ‘Brave New World’ collide in spectacular, Earth-shattering ways.Greta Van Fleet really love rock’n’roll and they really want you to love it, too. By the time this record plays out, they may well have achieved their goal.