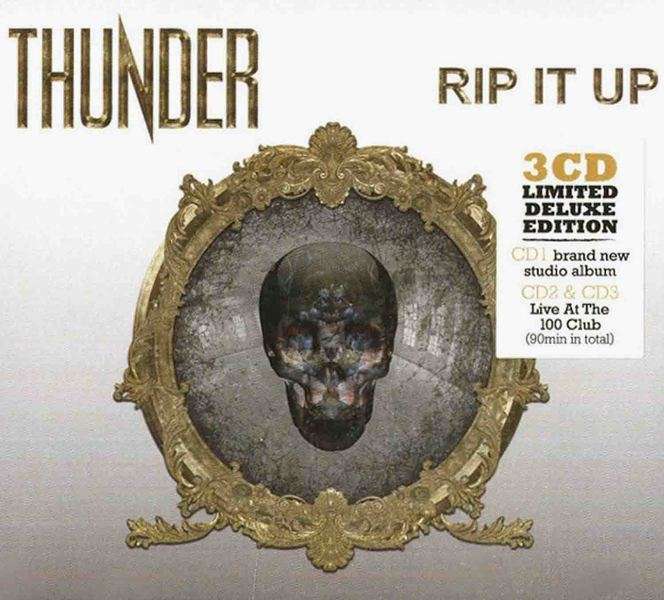 Thunder are an English hard rock band, who originally formed in 1989 when the band Terraplane broke up, leaving lead singer Danny Bowes and guitarist/main songwriter Luke Morley to form a new group, namely Thunder. Retaining Terraplane drummer Gary James (popularly known as 'Harry' James), they completed the line-up with bassist Mark 'Snake' Luckhurst and guitarist/keyboard player Ben Matthews. Though the band's main area of support has remained their homeland of the UK, they also enjoy significant success in Japan.Luke Morley and Danny Bowes first met at Haberdashers' Aske's Hatcham College in 1975, where they formed the band Nuthin' Fancy, which played in pubs around the London area and released an independent single "Looking For A Good Time". When Harry James joined after the previous drummer left, the band renamed themselves Terraplane. As Terraplane they played numerous gigs, including regular performances at the Marquee Club and a slot at the 1982 Reading Festival. They were signed by Epic Records and ultimately released two albums.Renamed Thunder, they were signed to EMI after performing a demo audition in 1989, and began recording their first album Back Street Symphony. With their producer, Andy Taylor (of Duran Duran) they created blues-rock and atmospheric ballads. Their debut album was a success in the UK, helped by an appearance at the 1990 Monsters of Rock festival at Donington Park.A follow-up album, Laughing on Judgement Day appeared in 1992 and reached number 2 in the UK Albums Chart. All four singles released from the album were Top 40 hits, and A Better Man made the UK Top 20 in early 1993. Snake quit the band after the subsequent tour and was replaced by Swedish bass player Mikael Höglund. In the meantime, rumours of an approach by Whitesnake singer David Coverdale to recruit Luke Morley were circulating, although in 2002 Danny Bowes stated that "the whole thing was made up" by the band to engineer some press interest.[1] and it would be another two years before the third album appeared.That album, Behind Closed Doors was reasonably successful, reaching number 5 in the UK Albums Chart. Despite this it was to be the band's last studio album for EMI, and they parted company with the label with a compilation: Their Finest Hour... And A Bit, notable for its inclusion of several unreleased tracks, in particular a cover of the Python Lee Jackson song "In a Broken Dream". For personal reasons Mikael Höglund was unable to participate in the recording of the band's fourth album The Thrill Of It All; Luke Morley handled bass duties and the album was released on the independent B Lucky record label. The band recruited bassist Chris Childs for the tour and he remained with them for the rest of their

Thunder are delighted to announce that their brand-new studio album "Rip It Up" will be released on 10th February 2017 on earMUSIC. The album, their 11th, features 11 brand-new songs recorded in 2016 and is proof positive that this is a band that exists only to push itself and aim higher. Following on from the Top Ten success enjoyed by previous release "Wonder Days", "Rip It Up" - as the title suggests – sees Danny Bowes, Luke Morley, Ben Matthew, Chris Childs and ‘Harry’ James stretching themselves musically, lyrically and creatively. Frontman Danny said: “After the positive reaction to ‘Wonder Days’ we were very happy, and it justified the approach we took in writing and recording. We decided to push it further on all fronts this time, to see what happened, and I think it shows in the writing and the individual performances. We couldn’t have made this album 10 or even 5 years ago, we weren’t good enough! We’re really looking forward to playing the new tunes live alongside the more established ones.” Fans don’t have to wait long, the band will embark on a nationwide UK tour in March, with full details and ticket links on the band’s website http://www.thunderonline.com. This album comes nearly three decades into their career and, if 27 is normally famed and feared as the rock milestone at which many of the great and the good have had their creative flames extinguished, then Thunder have arrived with a bulging bag of tunes, a notebook of great lyrics, a jerrycan of petrol, and a match. There are rockers, like the incendiary title track, ripsnorters like "She Likes The Cocaine", whilst songs like "Right From The Start" take the pace down, but turn the intensity up. Whilst the album closes out with the stylish blues-tinged melancholia of "There’s Always A Loser", it’s clear that the band have continued with their winning ways. After a summer of great gigs including killer performances at Ramblin’ Man and Steelhouse Festival, the quintet know what works and how to pace a set of songs. Title track "Rip It Up" is more than just a great and contemporary rock track, it’s a statement of intent. Thunder, as Danny sings 'don’t do subtle, don’t rely on luck', there’s quality in depth and style to burn here. Thunder have never sounded so intent or intense and, whilst this album cleaves to what made the band’s fans fall in love with them originally, there’s risk taking and ambition aplenty here. Thunder have no interest in taking the easy way. Since forming in 1989, the Londoners have established themselves among the UK’s most consistent attractions, notching up some 20 Top Fifty singles, 2 Gold albums and cultivating a well-deserved reputation as consummate live performers. The band’s sound is a timeless marriage of unforgettable melodies and sheer rock power. "Rip It Up" is a welcome addition to the Thunder catalogue, but more than that it represents another step up, another leap forwards. This is a band with a happy knack for crafting stone cold rock classics – but they’re not so interested in adhering to the rule book … "Rip It Up"? Too right.