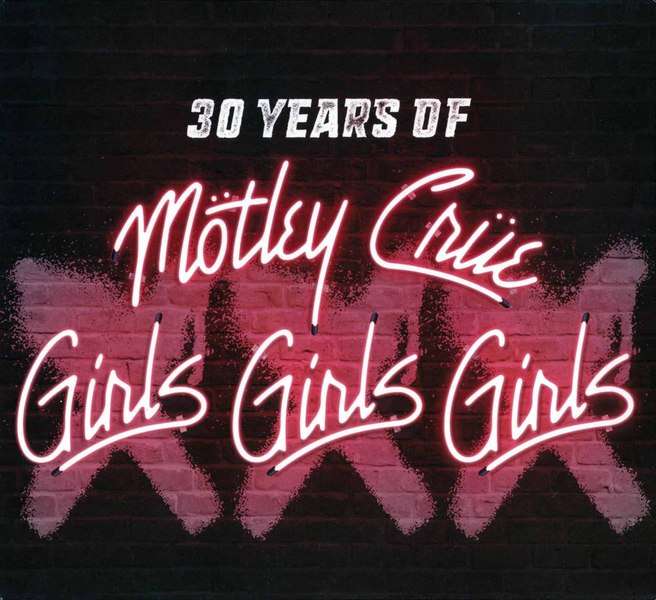 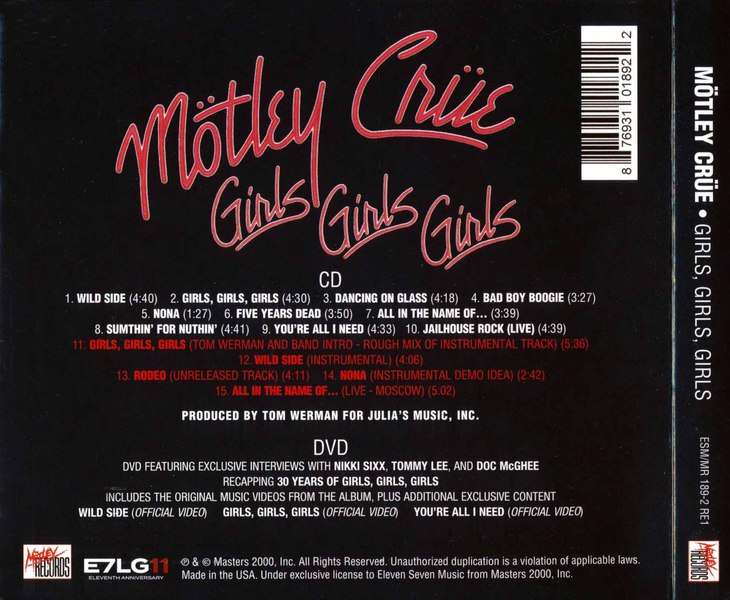 Mötley Crüe is an American heavy metal band formed in Los Angeles, California, in 1981. The group was founded by bass guitarist Nikki Sixx, and drummer Tommy Lee, who were later joined by lead guitarist Mick Mars and lead singer Vince Neil. Mötley Crüe has been described through the years as the World's Most Notorious Rock Band and one of the world’s best-selling groups of all time, having sold 75 million albums,and 25 million in the U.S.The band members have often been noted for their hedonistic lifestyles and the persona they maintained. All of the original members have had numerous brushes with the law, spent time in prison, suffered from alcoholism, suffered from long addictions to drugs such as cocaine and heroin, had countless escapades with women and are heavily tattooed. Their ninth and most recent studio album, Saints of Los Angeles, was released on June 24, 2008, and was certified Gold in January 2012. Mötley Crüe are working on their tenth studio album, after which they will embark on a farewell tour following its release before retiring.Mötley Crüe was ranked tenth on MTV's list "Top 10 Heavy Metal Bands of All-Time" and ninth on "VH1's All Time Top Ten Metal Bands".

To commemorate the 30th Anniversary of their 4x Platinum album "Girls Girls Girls", MOTLEY CRUE are releasing limited edition versions of the album under the title "XXX : 30 Years Of Girls Girls Girls" on various configurations; Vinyl Blue Marble LP, Deluxe CD/DVD, standard CD and even a Collector's Edition Cassette."Girls, Girls, Girls" continued Mötley Crüe's commercial hot streak, eventually going quadruple platinum as its predecessor, Theatre Of Pain, had; meanwhile, the title track brought them their second Top 20 single, and "Wild Side" became a popular MTV item.In general, the Crüe really plays up the sleazy factor on this album trying to recapture some of the street-tough grittiness that fueled their first album -- even appearing on the cover astride motorcycles and wearing leather; this time around, the influence of Aerosmith is felt to a much greater degree.The production too is carefully crafted to really give the record a raw, dirty feel, but the raunchiness comes through all the same.The record kicks off with the gritty anthem “Wildside” setting the scene for the rest of the album. “Wildside,” arguably the best song on the album, has since become a staple in the band’s live show. While the edginess of the track doesn’t carry throughout the entire album, it definitely gave the band something to build on in the future and proved to be a shining moment on "Girls Girls, Girls".The album’s title track – still part of the playlist in every topless club all over the world almost three decades later – is raunchy, sleazy and Crue to the core. Written during a time when music videos were not only relevant but generally required, the accompanying risque clip left a lasting impression.The third and final single “You’re All I Need” was the obligatory power ballad for that era. Although a sweeping song with beautiful music driven by piano, the lyrical content wasn’t quite as sweet… or expected.“Nona”, written for and about Sixx’s grandmother, who had raised him and who passed away during the writing process for this album, is a beautiful tribute. It provides soul and depth among the rest of the sleazy and general debauchery surrounding "Girls Girls, Girls". It’s a short song but the sentiment remains strong.The bluesy beats of “Bad Boy Boogie” and “All in the Name Of …,” in addition to the more rocking “Five Years Dead” and the wonderfully shambolic “Sumthin’ for Nothin’,” round out the original songs on the disc.Having had success with cover tunes in the past, "Girls Girls, Girls" employed a live take on the classic “Jailhouse Rock” to close things out.This reissue includes 5 bonus tracks, nothing too relevant but interesting mostly to hear the evolution process of the recording. I really like the rough mix of 'Wild Side", we have a previously unreleased track in "Rodeo" and a hot live take of "All In The Name Of... " taped in Russia.Panned by the industry, fans embraced "Girls Girls, Girls" unreservedly, and the album climbed its way to the No. 2 slot on the general Billboard chart, although it couldn’t knock off Whitney Houston to take over top honors.Looking back now at what role "Girls Girls, Girls" played in Mötley Crüe's spanning career, it seems to be the glue that kept them together during a personally difficult time, a project that prevented the band from blowing up. While maybe not their most commercially successful release, it was still immensely popular.Perhaps the real treat of this 30th Anniversary release of "Girls Girls Girls" is to have the album on vinly LP in remastered form.But considering the Japanese SHM-CD version went out of print some time ago, this is a new opportunity to get the CD at decent price. In terms of sound, it feels punchy and bright, with a lot of 'room'."Girls Girls, Girls" is pure Mötley Crüe, one of the most influential bands of the US hard rock genre.