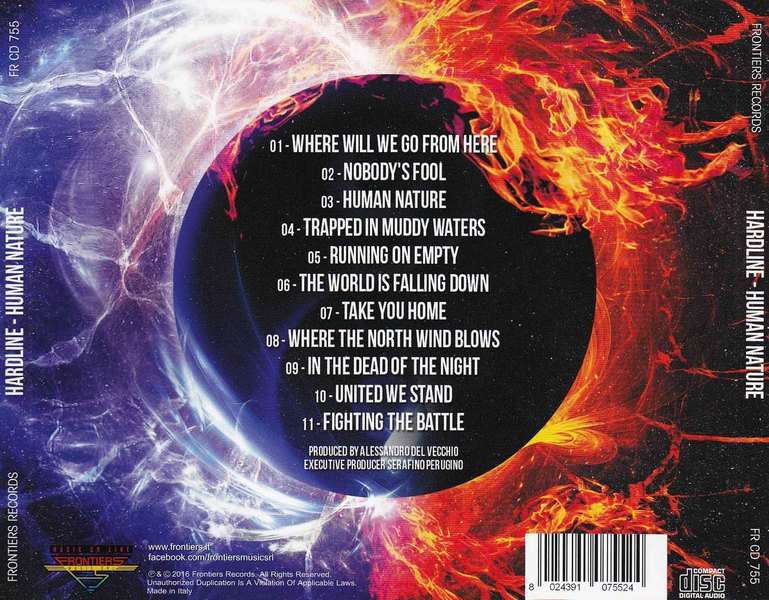 Hardline was formed when brothers Johnny (vocals) and Joey (guitar) Gioeli, originally from the band Brunette, teamed up with Journey/Bad English guitarist Neal Schon. The original plan was for Neal to produce Hardline, but as he was having so much fun that he decided to join the band as soon as he left Bad English for the tensions arosen with John Waite. They immediately added established musicians Todd Jensen (David Lee Roth, Alice Cooper) on bass and Deen Castronovo (also coming from Bad English) on drums to the mix and the result was magnificent. They went on to record their debut album “Double Eclipse” for MCA in 1992 and then went on the tour circuit with such heavy hitters as Van Halen and Mr. Big. The first single from “Double Eclipse” was the song “Hot Cherie”.While never popular in the mainstream, various radio stations worldwide started to play it and Hardline’s fanbase started to grow. They released a video to MTV, but did not get much airplay. By that time grunge and alternative had already taken over and melodic rock was being pushed aside. Tension among band members, the record company and perhaps certain egos, got in the way of an immediate follow-up album, despite the band having written more than enough material. While Neal re-started his adventure with Journey in 1995 (again together with Deen Castronovo), Johnny stepped out of the music business eventually to return as Axel Rudi Pell’s singer in 1998 on the album “Oceans Of Time”. But years later Johnny and his brother Joey were ready to give it another go with Hardline after the call of Frontiers Records, with an all new line-up featuring famed drummer Bob Rock (Nelson, Vinnie Vincent’s Invasion), lead guitarist Josh Ramos (The Storm, Two Fires), bassist Chris Maloney and keyboard player Michael T. Ross (Accomplice) and all new material. Of course the awesome result is Hardline “II” which was produced by veteran studio man Bob Burch.The album shows a new maturity and edge for Hardline combining powerful and immediately recognizable hooks coming from the classic hard rock tradition of Whitesnake, Van Halen and – of course – Hardline with all new elements and sounds. This album marks the long awaited return of an hard rock master and creates a landmark for the years to come for the development of this music style ! The album also includes the song “This Gift” written and performed with Neal Schon as special guest on guitar.Hailed by critics and fans alike as a top return, the band returned on stage headlining the GODS Festival in Bradford in June 2002, before Johnny and Josh started to work on new songs which eventually saw the light of day on the “Leaving the End Open” album released on Frontiers in may 2009.Following the release of “Leaving The End Open”, HARDLINE’s mastermind and singer Johnny Gioeli did not realistically feel that another HARDLINE album would have seen the light of day sometime soon. It was again thanks to the insistence of Frontiers Records President Serafino Perugino that the concept came about once again “I love surprises and this was certainly one of them”, says Gioeli. “Each time I decide to close the door on Hardline, I get the itch to continue”.Fate wanted that when Perugino sent Gioeli some song demos written by Alessandro Del Vecchio (an Italian musician and producer know for his work with Edge of Forever and Eden’s Curse but also with Axe, Mitch Malloy, Bobby Kimball and several other top musicians and bands), the singer became excited once again and wanted to give it another go.

Frontiers Music Srl is excited to announce the return of HARDLINE with the brand new album “Human Nature”, set for release on October 14.Following the rebirth of the band that happened with the release of “Danger Zone” in 2012, Hardline have regrouped around fabulous singer Johnny Gioeli with the excellent production and keyboard skills of Alessandro Del Vecchio (Rated X, Resurrection Kings, Revolution Saints), the shredding talents of guitarist Josh Ramos (The Storm), and the powerful rhythm section made up of bassist Anna Portalupi (Tarja Turunen) and drummer Francesco Jovino (Primal Fear, Jorn). All these musicians have an impressive pedigree, but what makes Hardline special is how well their unique and different talents blend together.The goal for their new album was to have a heavier and updated version of the original Hardline sound. Think debut album, 1992's “Double Eclipse” updated for the 21st Century, with a grittier and more straight ahead sound. Anthemic, hard rocking songs are what you can expect from this record and hook after hook, riff after riff, you’ll find yourself wowed by this absolute monster of an album!When Gioeli and Del Vechhio got together to begin writing songs for the album, “[T]he plan was to create an album that emulates the feeling of "Double Eclipse" combined with the dynamics of modern day rock. Very heavy and in your face, but still with hitting melodies,” says Johnny. “I have a tremendous amount of Axel Rudi Pell fans that know me for the way I deliver a metal song too. So yes, it’s definitely the heaviest we have done since the debut. I see this album as the perfect mix of styles.”“As a producer I pushed everyone to squeeze these songs and put as much attitude as we could on tape,” adds Alessandro Del Vecchio. “We wanted more of an in-your-face attitude than our softer albums. I think we understood we had something special in our hands when we finished “Take You Home”. Even if it's the ballad of the album I guess it's the focal point of the musical bond that Johnny and myself share with the whole band.”“The guys put their heart and soul into their performances,” concludes Johnny “You can hear the essence of every drum strike and the sweat hitting the drums shortly after. Do it again, Cesco! HARDER, HARDER! Josh, Anna and Ale wouldn’t stop until their fingers said “enough”…and then……we did it again and again. That’s rock and roll man. Songs like “Where Will We Go From Here,” “Human Nature” and “Take you Home,” to me they are the essence of what I LOVE to sing and HOW I love to sing!”

+ Video "Where Will We Go From Here" (Official Video)