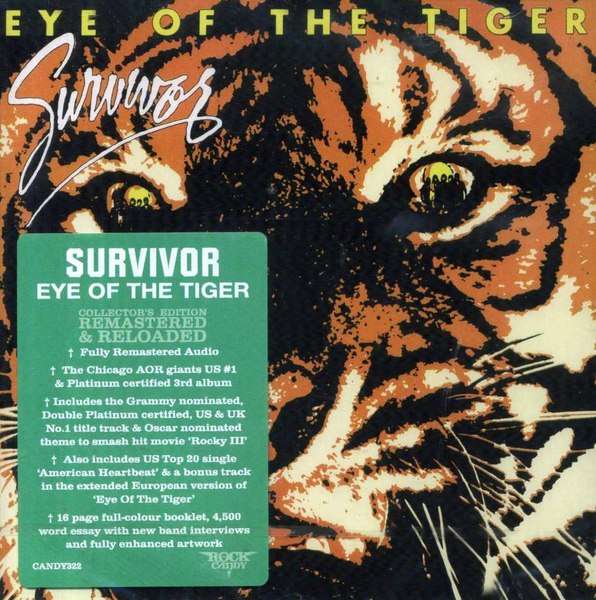 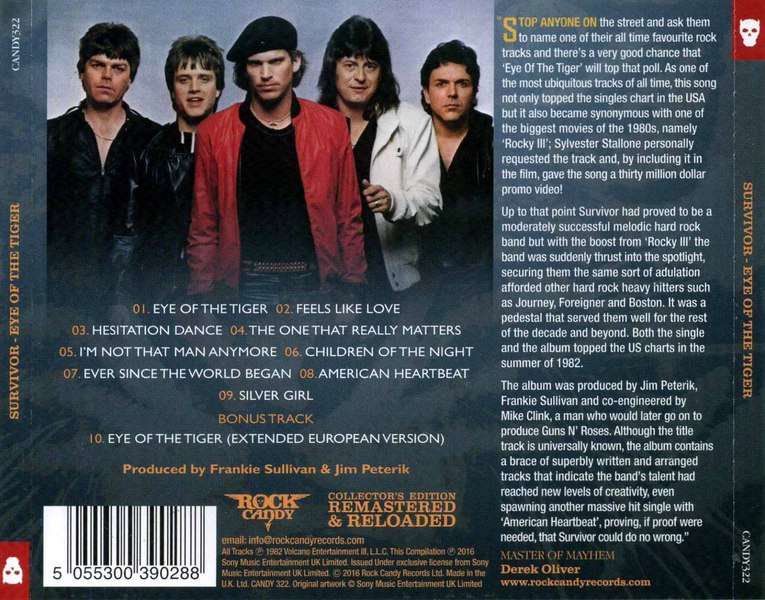 Survivor is an American rock band formed in Chicago in 1978 by Jim Peterik. The band achieved its greatest success in the 1980s, garnering many charting singles, especially in the United States. The band is best known for its double platinum-certified 1982 hit "Eye of the Tiger," the theme song for the motion picture Rocky III (US number 1 for 6 weeks). Singles like "Burning Heart" (US number 2), "The Search Is Over" (US number 4), "High on You" (US number 8), "Is This Love" (US number 9) and "I Can't Hold Back" (US number 13) continued to chart in the mid-1980s.The band tweaked its musical direction in 1988 with the release of the slightly heavier Too Hot to Sleep, but due to lackluster promotion the album barely reached the Billboard 200 in the United States. Because of this and tension between founding members, the band split.Singer Jimi Jamison later toured as "Survivor" in the mid-1990s without the permission of the rest of the band, but reunited with guitarist Frankie Sullivan in 2000. The band then released Reach in 2006, but Jamison left again after its release and was replaced by singer Robin McAuley. Survivor continued to tour with McAuley into 2011 until Jamison returned later that year.An announcement on November 13, 2011 by McAuley on his Facebook page revealed that he had left Survivor. A subsequent announcement on November 18, 2011 confirmed that Jamison had rejoined the band and a tour was to take place in 2012.In April 2013 it was announced by the band's official media sources that guitarist Frankie Sullivan had reunited the current Survivor line-up with original singer Dave Bickler, with the band now having their two most popular vocalists together for the next tour, Bickler and Jamison.On September 1, 2014 Jamison died of what was believed to be a heart attack in his home in Memphis, TN. at the age of 63. His autopsy released on November 11, 2014 revealed the actual cause of death to be a hemorrhagic brain stroke, with "acute methamphetamine intoxication contributing."

Rock Candy Records specialists did some time ago great remasters to SURVIVOR‘s catalog minus the band’s classic “Eye Of The Tiger“. Finally they got the rights for the reissue and their own remastering treatment, featuring as bonus track the hard to find Special Extended Version of the iconic title track.A true ’80s US Melodic Rock landmark, “Eye Of The Tiger” marked Survivor’s sales peak driven by the US / UK number 1 hit single title track.‘American Heartbeat’ also charted well reaching #17 at Billboard, but the whole album was overshadow by the massive impact of title track which was chosen as theme song of the film Rocky III, and since them, become a timeless classic.The album was produced by guitarist Frankie Sullivan and engineered by Mike Clink, a man who would later go on to produce Guns N’ Roses stardom first record.Although the title track is universally known, most people may have forgotten how strong the other tunes are.This record contains a brace of superbly written and arranged tracks that indicate the band’s talent had reached new levels of creativity.Great rocker ‘Feels Like Love’ gets your adrenaline going, there’s a catchy funky groove on ‘Hesitation Dance’, driving guitars on ‘Children of the Night’, and primo ’80s AOR on ‘American Heartbeat’.And of course superb ballads in ‘Ever Since The World Began’ (a precursor to Vital Signs’ The Search Is Over), and the immaculate ‘Silver Girl’. For midtempo AOR magic try the brilliant Peterik-penned ‘The One That Really Matters’ which should have been a top tenner in the charts.Survivor reach the peak of creativity in next album Vital Signs, but this “Eye Of The Tiger” is a truly great Melodic Rock record as well.This Rock Candy remaster is clean, with a warm bottom end, and perhaps more bright than all the previously available, among the best you can find. And includes a bonus the much sought after ‘Eye Of The Tiger’ Special Extended Version.