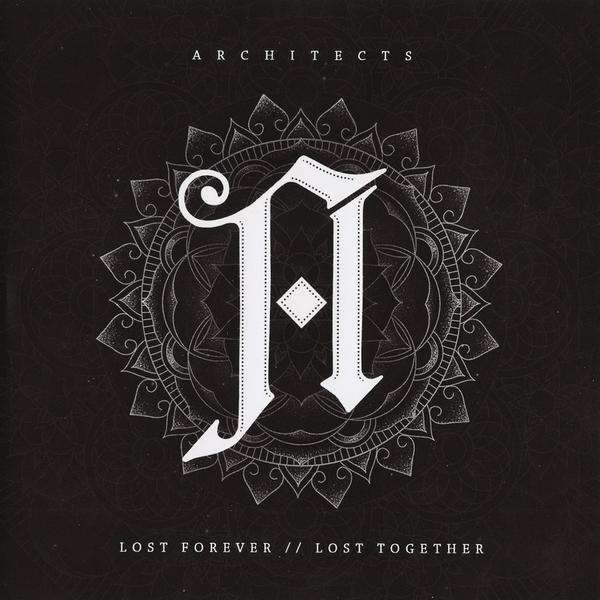 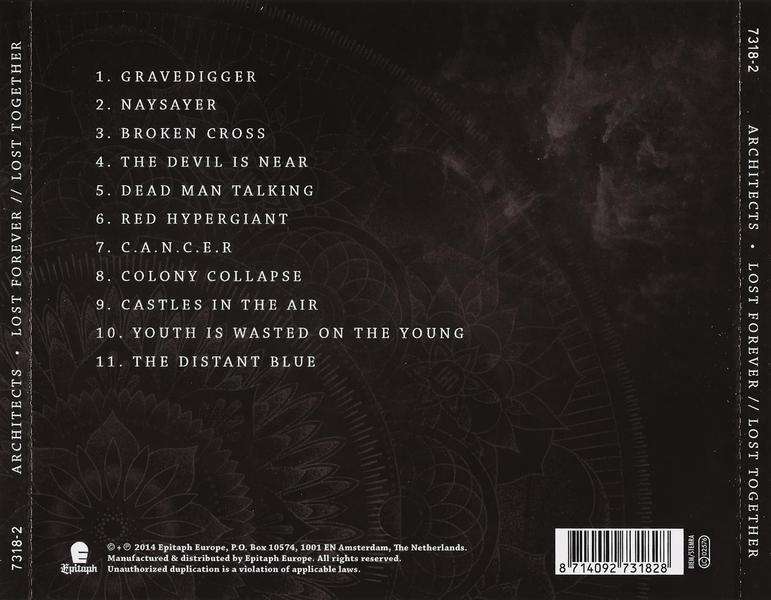 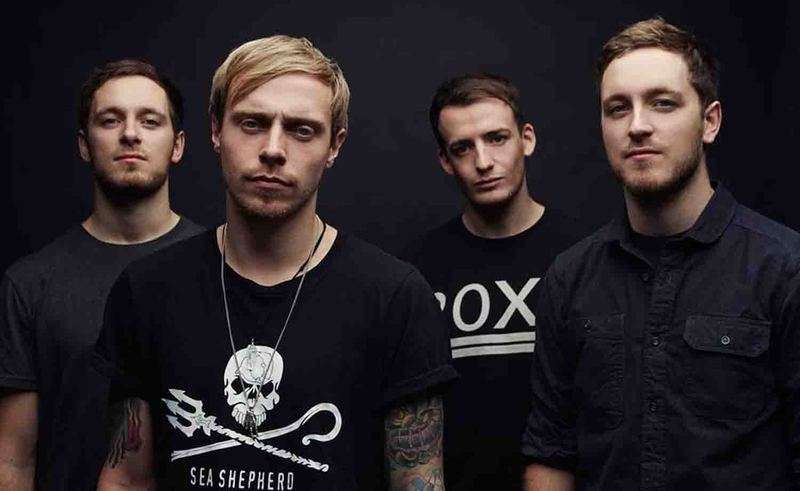 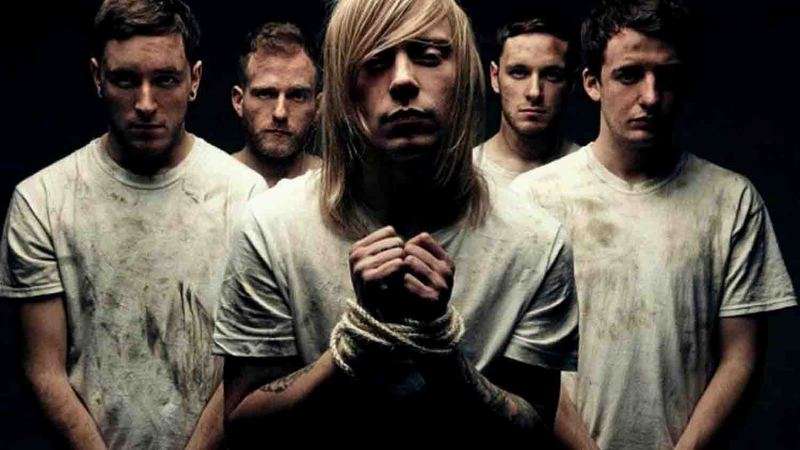 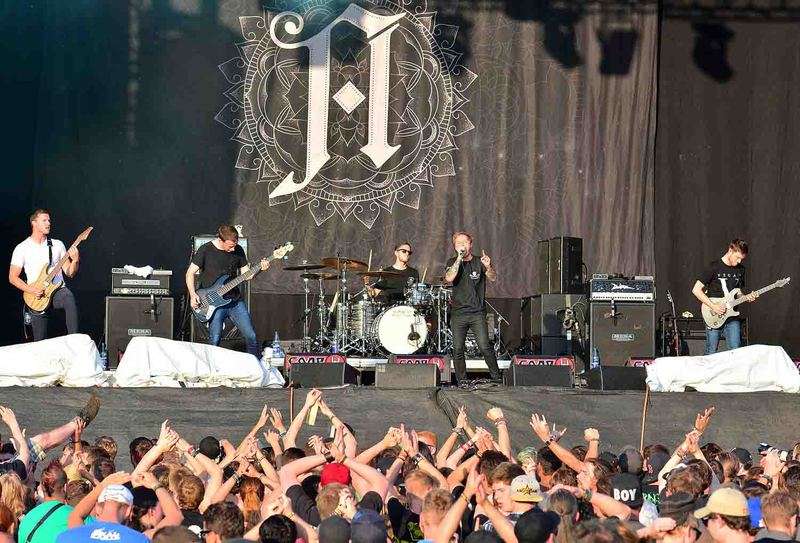 Architects are a British metalcore band from Brighton, England, formed in 2004. The band currently consists of lead vocalist Sam Carter, drummer Dan Searle and his twin brother, guitarist and keyboardist Tom Searle and Alex Dean on bass guitar. The band went through several name changes before they decided upon Architects. Their first name was Inharmonic, which was swiftly changed to Counting the Days. After a couple of years this was in turn changed to Architects. They have released five studio albums and one split ep with Dead Swans.They released their debut album Nightmares in 2006 on In At The Deep End records. After the departure of the original vocalist, Matt Johnson, Carter joined the band and made his first appearance on Architects' second album Ruin released in 2007 through United By Fate records. In 2009 the band released Hollow Crown through Century Media records. They then released their fourth album The Here And Now in 2011, which showed the band step in a more melodic "clean-cut post-hardcore" direction.Upon its release the album received critical acclaim but was panned by their fanbase.The next year Architects returned to their original style with their fifth album Daybreaker, with more politicised lyrics as opposed to the violent and comedic lyrics that can be heard throughout their older work.Their sixth album Lost Forever // Lost Together is being released on March 10th (UK & EU)/March 11th (US) 2014 through Epitaph Records.The band members are currently all vegan.They all became vegan after watching several documentaries on the subject.In 2013 the band promoted Daybreaker further, primarily in the United States, first supporting Enter Shikari in the US in March with Crossfaith and then as part of the American Warped Tour 2013 in June.They also played the main stage at Download Festival 2013 at Donington Park, Leicestershire, United Kingdom.Before their large touring schedule in the United States the band wasn't confident in performing as they were "tired of losing money" with their tours in the country and that "[the band] were about ready to give up on America".Architects announced that they were recording their sixth full-length album in September.The band announced they were doing a third tour of the United States in 2013 in November and December with co-headliners Protest The Hero and support from The Kindred and Affiance,as well as plans to go to Australia before 2013 had finished.Architects final performance in support of Daybreaker is their first performance in India at the Saarang culture festival on 11 January 2014 with Romanian rock band Grimus.In mid April 2013, Architects released a trailer of a their own documentary "One Hundred Days: The Story Of Architects Almost World Tour". Directed by Tom Welsh, the documentary is a story about Architects' Almost World Tour.The funding for the film was done as a community funded project on indiegogo.The band decided to release the film since they had left Century Media.After the target amount had been reached for the film Architects posted a song clip of a new song "Black Blood" online for people to listen.The band has planned a full tour of Europe starting in the United Kingdom in 7 March 2014, reaching through 15 countries, and ending in France in 16 April with support from Stray from the Path and Northlane.This tour was in conjunction with the announcement of new record label deals established, and their new record is planned to be released through Epitaph Records in the United States and Europe, UNFD in Australia and New Damage Records in Canada.When commenting on them signing to Epitaph Architects noted how it was their ideal label following their split from Century Media.Their sixth studio album was produced by extreme metal producer Fredrik Nordström and recorded at Nordström's Gothenburg based studio Studio Fredman.[49] Nordström was chosen by the band as they felt he was "a perfect match" for the band's sound.The band released the first single from the record, "Naysayer" on 14 January 2013.On January 9, 2014 the band released a trailer for their forthcoming album titled, Lost Forever // Lost Together, released on March 11 via Epitaph Records.The album was streamed through Epitaph Record's Youtube Channel on February 27, 2014, due to it being leaked prematurely a day prior.

Lost Forever // Lost Together is the sixth studio album by British metalcore band Architects.It was released on 11 March 2014 globally through Epitaph Records; with the exception of UNFD in Australia and New Damage in Canada.Lost Forever // Lost Together was recorded at Swedish recording studio Studio Fredman with producers Henrik Udd and Fredrik Nordström. They were chosen because of Architects' admiration for the production work Nordström and Udd had done with other metal bands like Bring Me the Horizon and At the Gates. In a conscious decision to not mimic the bluntly political themes of Daybreaker, Architects lyricist Tom Searle wrote about his experiences with cancer, though he still looked at the themes of environmentalism, religious extremism and current affairs. Musically, the band put more focus on post-rock influenced spacey elements with the use of electronics and orchestration.Upon its release, Lost Forever // Lost Together received critical acclaim from critics, achieving an aggregated 79/100 on Metacritic, based on six reviews.The album also charted in six countries' mainstream album charts, four of which it achieved places within the top 40. The band has released two singles in promotion for the record, "Naysayer" and "Broken Cross", with the former debuting at number 3 on the UK Rock Chart, and have also released a music video for "Gravedigger". The band has also promoted the album through shows in Europe, North America and Australasia.