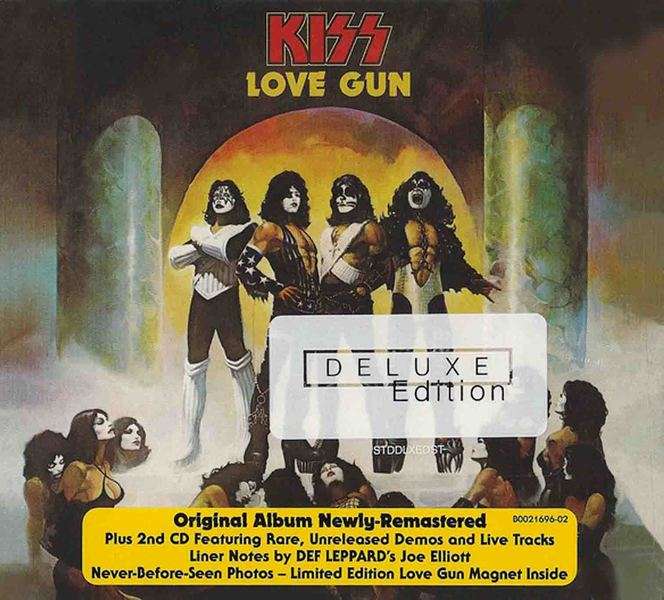 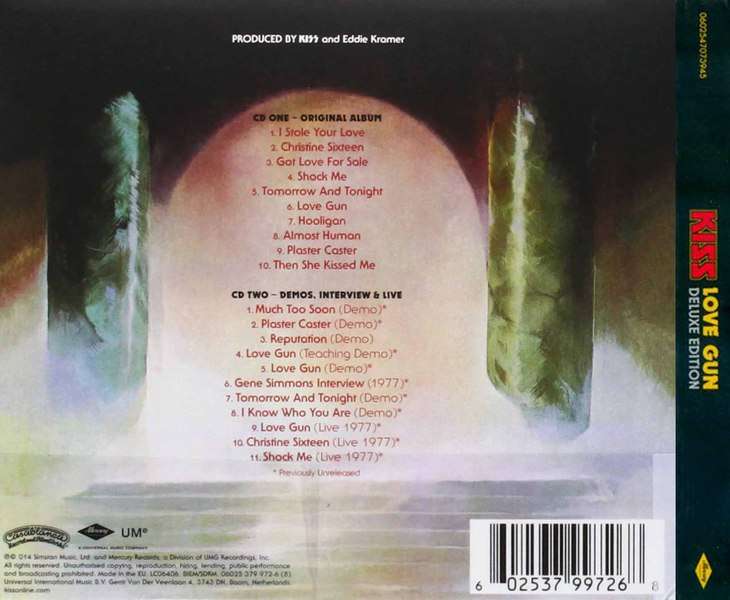 The 40-year-anniversary celebration will continue. Now the sixth studio album by the band appears with the title "Love Gun" as a 2-CD Deluxe Edition. In this edition are: CD 1: the original album remastered CD 2: rare, previously unreleased "Love Gun" demos of "Plaster Caster," "Then She Kissed Me," "Tomorrow and Tonight" and "Much Too Soon". In addition, the first four lines of the demos of "I Know Who You Are" (which later became "Living In Sin") and much more.The packaging comply with the Deluxe Editions series with his usual digipak packaging.Love Gun is the sixth studio album by American hard rock band Kiss, released on June 30, 1977.[1] Casablanca Records and FilmWorks shipped 1,000,000 copies of the album on this date. It was certified platinum and became the band's first top 5 album on the Billboard 200. The album was remastered in 1997 and again in 2014.It was their first album to feature a lead vocal performance from Ace Frehley, making it the first Kiss album to feature lead vocal performances from all four band members. It was also the last studio album to feature Peter Criss on every song, as he was replaced by session drummer Anton Fig for all but one song on 1979's Dynasty.A cardboard "Love Gun" (assembly required) was included inside the album,[6] along with a Kiss merchandise order form.[7] Before Love Gun was completed, a Gallup poll indicated that Kiss was the most popular band in the United States, beating Aerosmith, Led Zeppelin and the Eagles. On August 26, 27, and 28, 1977, Kiss recorded three shows at the LA Forum for their next release, their second live album Alive II.The album cover was painted by fantasy artist Ken Kelly,[8] who previously contributed the cover for 1976's Destroyer.Love Gun was reissued in 1985. The reissue included the original artwork, and while it featured a plain sleeve the jacket still contained a reference for the original color sleeve. The first 10,000 pressings included an error on the labels; Track 3 on Side A was listed as Plaster Caster but actually played Got Love For Sale. Side B was completely out of order.Love Gun was remastered and reissued in 1997 as part of the Kiss Remasters series.It was remastered and reissued again in a deluxe edition on October 28, 2014, with sleeve notes by Def Leppard's Joe Elliott and a second disc containing demos, live rarities and a 1977 interview with Gene Simmons. All tracks on the second disc were previously unreleased, bar the demo of "Reputation", which had appeared on the compilation Kiss 40 a few months earlier. The three live tracks were recorded at the Capital Centre in Landover, Maryland on December 20, 1977. "The potential for this to be the greatest deluxe edition of all time," noted music writer Geoff Barton, "is ruined by a too-clean remastering job – plus, if truth be told, a track that has dated badly in 'Christine Sixteen'."