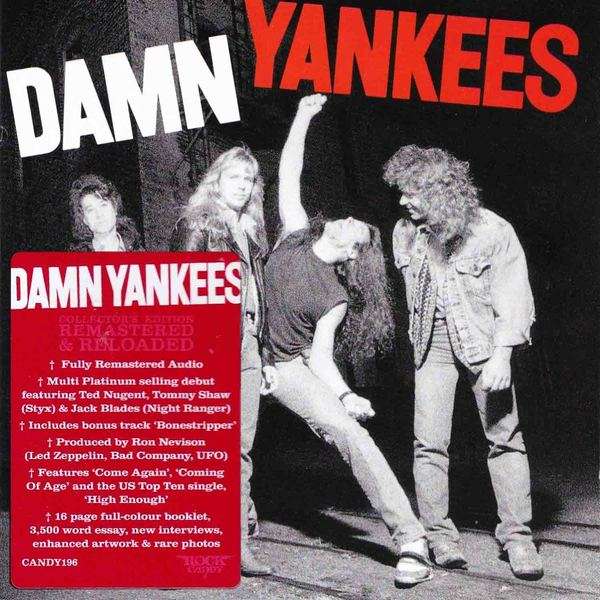 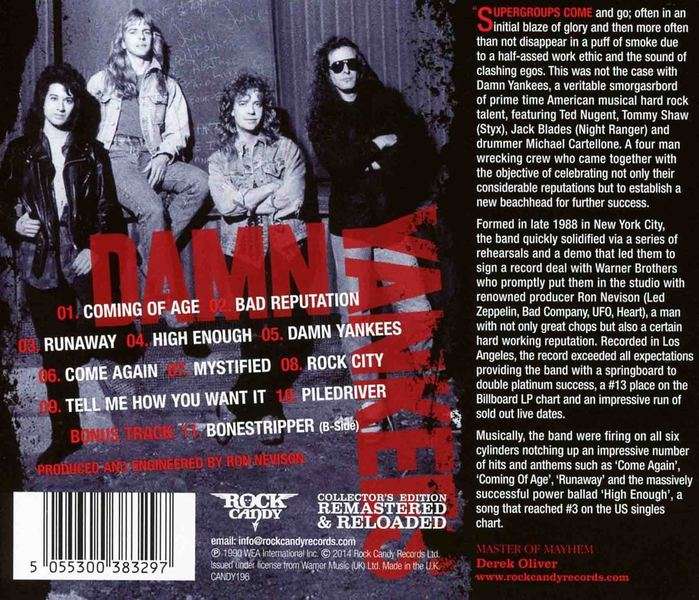 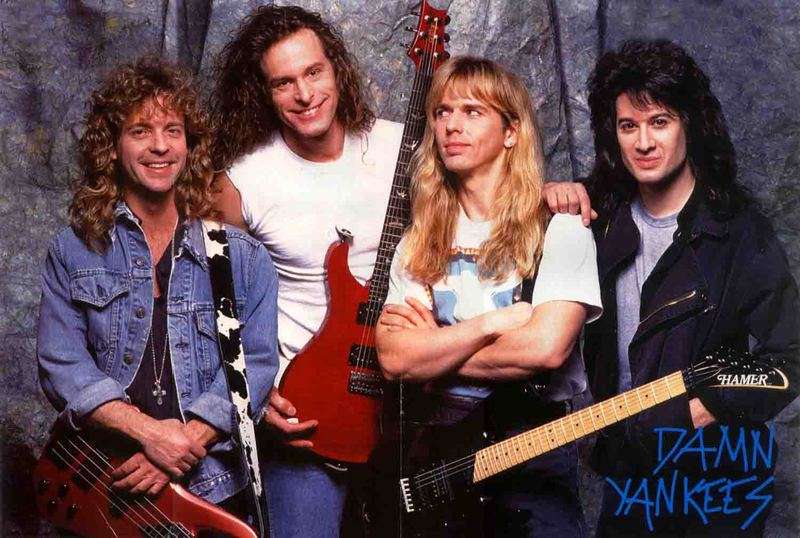 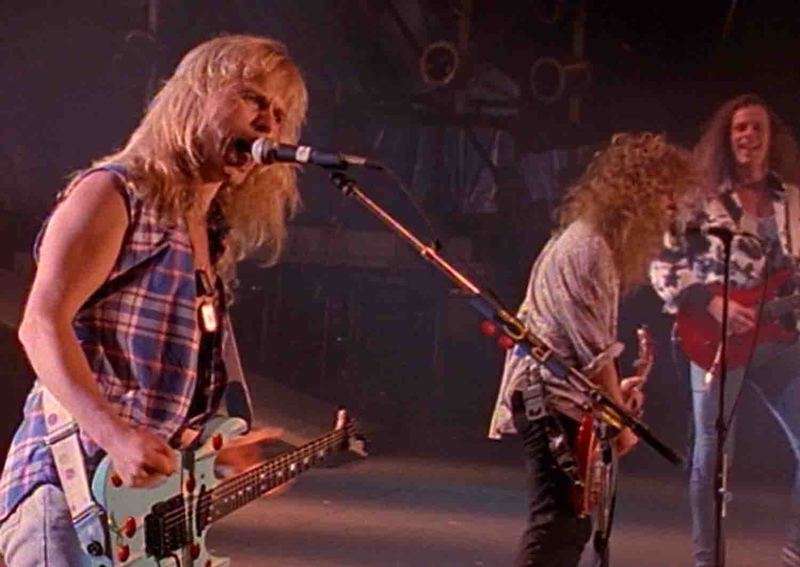 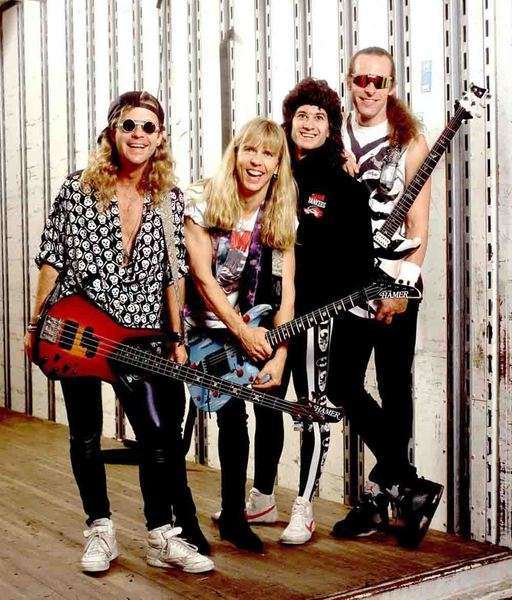 Damn Yankees were an American rock super group formed in 1989 consisting of Tommy Shaw of Styx, Jack Blades of Night Ranger, Ted Nugent of The Amboy Dukes and a successful solo career, and Michael Cartellone (then an unknown drummer who would later join Lynyrd Skynyrd).They are remembered for the songs "High Enough" and "Where You Goin' Now", both Top 40 hits in the early 1990s. Produced by rock producer Ron Nevison, the new band's self-titled debut album went double-platinum in 1990. Jack Blades's leading single "Coming of Age" hit No. 60 on the U.S. Hot 100, and No. 1 on the AOR charts, while Tommy Shaw's "Come Again" received extensive AOR airplay.1990's rock ballad "High Enough" rose to No. 3 on U.S. Hot 100, and No. 2 on AOR charts. Despite Ted Nugent's career being built on his hard-rock "Motor City Madman" image, the more pop-rock sound of "High Enough" was his first mainstream top ten single. The band's songs appeared on several Hollywood film soundtracks, such as Gremlins 2: The New Batch, Nothing But Trouble and The Taking of Beverly Hills.After the release of their debut, the Damn Yankees went on an 18-month world tour with the likes of a revamped Bad Company, Poison and Jackyl. Their U.S. tour coincided with the Persian Gulf War, in which the band unfurled American flags and made patriotic statements.In 1992, Damn Yankees went gold with their follow-up album Don’t Tread. The title song, sung by Blades, enjoyed extensive coverage at the Barcelona Olympic Games. Ted Nugent also appeared on Rock the Vote, voicing support for the GOP against Bill Clinton. Although the second release was not as successful as the first album, it contained a few hits, such as "Mister Please," "Where You Goin' Now," and "The Silence Is Broken," a power ballad featured in the 1993 Jean-Claude Van Damme film Nowhere to Run.In 1994, Ted Nugent revived his solo career, leaving Tommy Shaw & Jack Blades to record their own album as the duo Shaw Blades. Released in 1995, Hallucination received very little support from its label as a personnel change brought industry executives more sympathetic to alternative and grunge bands.Ultimately, the Shaw Blades album came out to some critical praise, but it vanished without major single support or a national tour (which had been cancelled by Warner Bros.). "I’ll Always Be With You" did garner some AOR airplay, and the title track was heard in the hit movie Tommy Boy, but after a brief West Coast tour, both Shaw and Blades went back to their respective original bands, Styx & Night Ranger.In 2007, Shaw Blades released their new album Influence, which consisted solely of cover songs that influenced them, mostly from the 1960s and 1970s. The pair also recorded a cover of the classic Christmas song "The Twelve Days of Christmas" on the "A Classic Rock Christmas" album by various Classic Rock artists in 2002. Both members still principally record and perform with their respective original bands.During a hiatus in both Night Ranger and Styx, Shaw and Blades met with Ted Nugent to record a new Damn Yankees album in 1999. However, the album, provisionally titled Bravo, failed to please either the band members or the prospective record labels. Some of this unused material may have surfaced on various group and solo albums of the band members.While on the VH1 Classic show Power Ballads of 88, Jack Blades commented about recent rumors regarding Damn Yankees. Jack said he, Ted, and Tommy had been talking and hanging out. Jack then said there would be new music and a tour from Damn Yankees in the future.In 2004 at Alice Cooper's Christmas Pudding, an annual charity concert to benefit Alice Cooper's Solid Rock Foundation and Teen Center in Phoenix, AZ, Damn Yankees reunited on stage. The band played "Don't Tread", "High Enough" and "Coming of Age".On January 15, 2010 at the NAMM Show in Anaheim, California, the original members of Damn Yankees made a surprise appearance at the Taylor Guitars exhibit. Jack Blades, Tommy Shaw, Ted Nugent, and Michael Cartellone performed an acoustic set on the Taylor Stage including hits such as "Coming of Age", "High Enough", and the Ted Nugent anthem "Cat Scratch Fever".In 2011, Nugent joined Jack Blades' band Night Ranger to record an extended version of "Coming of Age" as a B-side for their album "Somewhere in California." In place of his original solo, Nugent plays a version of the guitar solo from "Stranglehold."In May 2017, Cartellone joined Night Ranger at the Wildflower Festival in Richardson, Texas for a performance of "Coming of Age."As far as a potential Damn Yankees reunion goes, Cartellone told Cleveland NBC affiliate WKYC that he and other members of the band have continued to meet and write over the years. While a new album has yet to materialize, he says that does not mean the Damn Yankees are finished. They never purposefully disbanded and are keeping a reunion an open door to this day.

Easily in my Top 25 rank of the best US Melodic Hard Rock records of all time, the self-titled debut by DAMN YANKEES still sounds awesome today, even better on this great remaster done by Rock Candy Records.Super Groups come and go; often in an initial blaze of glory and then more often than not disappear in a puff of smoke due to a half-assed work ethic and the sound of clashing egos.This was not the case with Damn Yankees, a veritable smorggersboard of prime time American musical hard rock talent: Ted Nugent, Tommy Shaw (Styx), Jack Blades (Night Ranger) and drummer Michael Cartellone.A four man wrecking crew who came together with the objective of celebrating not only their considerable reputations but also to establish a new beachhead for further success.Formed in late 1988 in New York City, the band quickly solidified via a series of rehearsals and a demo that led them to sign a record deal with Warner Brothers, who promptly put them in the studio with renowned producer Ron Nevison (Led Zeppelin, Bad Company, UFO, Heart), a man with not only great chops but also a certain hard working reputation.Recorded in Los Angeles, the album exceeded all expectations, providing the band with a springboard to double platinum success, a #13 place on the Billboard LP chart and an impressive run of sold out live dates.Musically, the band were firing on all six cylinders, notching up an impressive number of hits and anthems such as ‘Come Again’, ‘Coming Of Age’, ‘Runaway’ and the massively successful power ballad ‘High Enough’, a song that reached #3 on the US singles chart."Damn Yankees" already sounds incredible in its original release, but this remaster is more than welcomed as the CD become pretty hard to find.And together with these terrific songs you have the bonus track "Bonestripper", the rocking single B-Side also used in a movie soundtrack.