By at 20:05:16 appearing commercially debut album "Force Of Luna" Visionatica mix the symphonic metal scene on powerful. The fimmusikreifen orchestral arrangements, brutal metal riffs and the extraordinary soprano voice of Amara are the hallmark of Visionatica.At the current single "She Wolf" the young band has produced in association with Limlights Productions her first music video. In March 2016, the band reached the 2nd place in the scene known "Battle Of The Bands" of Sonic Seducer magazine.Their latest single, "She Wolf" and the debut album "Force Of Luna" were produced in association with producer Timon Seidl, Composer Armin Haas and the prestigious Gate Studio, which already for Metal greats like Avantasia, Epica, After Forever and Rhapsody has worked.Visionatica shared stage with bands like Xandria, Serenity, Stratovarius, Orden Ogan, harpy and Cambrian stage.

German band Visionatica are releasing their debut Force of Luna, an album with a lovely cover artwork and a she-wolf behind the microphone. They have a logo that suggests that they are playing some kind of power metal, a suggestion that isn’t too far fetched. The band have enlisted the help of well-merited Olaf Reitmeier for the mixing and mastering of this album, maybe they have some grandiose plan for their musical career. But what shall we then say about this quartet? Female fronted power metal isn’t exactly a genre with few bands in it and standing out is increasingly difficult, so lets see about these guys.Musically they are not much different from many other bands I have heard, I immediately come to think of Within Temptation as the singer sounds quite alike Sharon Den Adel who is known for singing in that band – think the more uptempo songs of that band and you have a fair approximation of how this band sounds. But it is not only that of course, there are other bands you can use for reference, take Nightwish, Xandria, Evenoire and many more like them. Great sound, power metal with some touches of the symphonic and those things, I think we can describe this as a quality production. They have an impressive vocalist, and nine tracks that show good variation and depth – and a decent playing time with 38 minutes.I think that we can describe this as a quality album, great songs, excellent melodies and a great vocalist. Impressive debut, that much is certain. One could argue that they aren’t exactly deviating from established parameters and that is a valid point, but they do what they do so well that it doesn’t really matter – but if they want to remain interesting further along their career path they need to find something more of an own voice. I think this is one of the best female fronted albums I have heard in a while; I think it is an excellent album.All the nine tracks of the album are good, maybe that the second track has some pointless losses in pace but the track itself is still very good. The best track is the one called Totem, it is a real hit song. Another song worthy of mention is the video track She-Wolf, these two would be well worthy of receiving plenty of airtime on radio channels around the world. In the end I think we can conclude that Force of Luna is an excellent album and that the name Visionatica is well worth remembering. 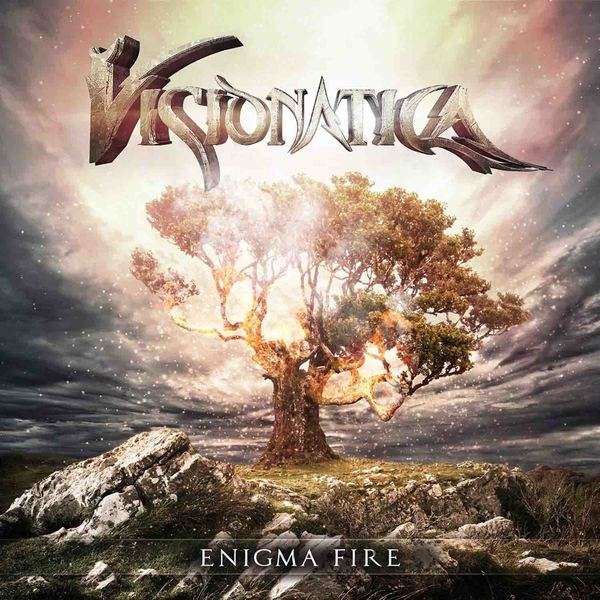 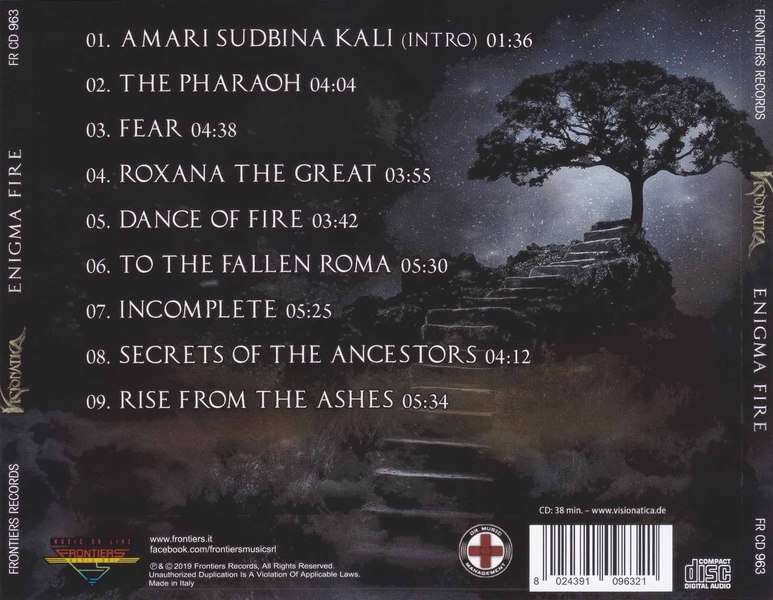 VISIONATICA formed in 2013 and began to flesh out ideas for their approach to the symphonic metal sound.The group envisioned a sophisticated concept with the result that their debut album, ‘Force Of Luna’, was an extremely melodic yet powerful record full of energy in which skilfully arranged orchestral sections merged perfectly with virtuoso guitars, driving drums and the soprano voice of their classically trained vocalist. Its first single, ‘She Wolf’, and equally powerful songs such as ‘Certainty Of Benevolence’ and the emotional duet ‘The Thorns’ (featuring Winterstorm singer Michael Liewald) announced their arrival on the scene in truly grand style.With their new album, ‘Enigma Fire’, the group are fully intent on taking things to the next level. Be prepared for bombastic orchestral arrangements paired with stunning fretwork and new musical influences that will take listeners on a sonic journey they will want to experience over and over again.

Led by vocalist Tamara Amedova alongside guitarist Manuel Buhl, drummer Gerhard Spanner and bass player Tim Zahn, Visionatica first entered the symphonic metal scene in 2016. With fantastic, crystal clear soprano vocals combined with powerful grooves, melodic guitars and orchestral elements, the band announced themselves with their debut album, "Force Of Luna". The band's second album, "Enigma Fire" marks the beginning of their newly minted worldwide collaboration with Frontiers Music Srl. Fans of bands such as Within Temptation, Nightwish, Delain, Xandria and the like will find much to love here.Visionatica formed in 2013 and started to flesh out their idea for an approach to the symphonic metal sound. They envisioned a sophisticated concept and commenced writing songs for their debut. The final result was an extremely melodic but at the same time powerful album full of energy in which skillfully composed orchestra sections merge perfectly with virtuoso guitars, driving drums and the fantastic voice of their classically trained vocalist. With "Force Of Luna", Visionatica produced an album that tells stories about wolves, visions, lies, myths and much more. With their popular first single "She Wolf" and equally powerful songs such as "Certainty Of Benevolence", the emotional duet "The Thorns" (with Winterstorm singer Michael Liewald) and more, the band had officially announced their arrival."Enigma Fire" will prove that Visionatica are not simply resting on their laurels, as they are fully prepared and intent on taking things to the next level. Get ready for bombastic orchestral arrangements paired with stunning fretwork and new musical influences outside of the box, which will take the listener on a sonic journey they'll want to experience over and over.