The PALADINE story started in 2013 when a group of three friends from Athens, Greece, felt the strong desire to express their common passion for Epic Heavy Metal. Founding members Chris “Crazy” Stergianidis (bass), Thanos Kollintzogiannakis (guitar – DESERT NEAR THE END) and Stamatis Katsafados (drums – THE SILENT RAGE), all former members of the underground band MYTHRAAL, decided to make their dream a reality and joined forces once again. The outcome was the composition of original material in Chris' home studio and the formation of a new band under the name “PALADINE”.The purpose of PALADINE was to create music by combining the finest elements of what makes Metal, especially US-style Epic Heavy Metal, so great: power, melody, speed, energy and emotion. At the same time, the search was on for an appropriate singer that would fit with the band's epic sound and feeling. Finally, after a long period of searching, in 2014, Nick Protonotarios, aka The Metalizer, became the chosen one and joined as both the band's singer and lead guitarist. In 2015, the complete line-up took shape as the band was joined by keyboardist Marilena Plitsi. The combination worked and it gave PALADINE the unique edge that defines the band's sound.In late 2016, PALADINE completed the recording, mixing and mastering of their debut full-length album “Finding Solace” at Devasoundz Studios in Athens, Greece, in collaboration with their producer and huge friend Thimios Krikos (guitar – INNERWISH, DIVINER). Following that, a deal was signed with No Remorse Records for its release on 7 April 2017.Currently, the band is planning to release both a lyric video and a music video as part of the promotion of the album. Also, the band is confirmed as one of the opening acts for the Athens show of MANILLA ROAD's 40th Anniversary tour on Monday 1 May 2017.PALADINE strongly believes that Metal is a lifestyle, a religion and a lot more than a simple music genre. Therefore, the band is committed to create and play Epic Heavy Metal without any compromises and wishes to become a part of its rich history.

The origins of Greece's Paladine are found in the ashes of another, now defunct, Greek band: Mythraal. Founding members Chris Stergianidis (bass), Thanos Kollintzogiannakis (guitar), and Stamatis Katsafados (drums) are former members of that band. They rise again to create a new melodic power metal and offer a new album Finding Solace. They're joined by Nick Protonotarios on vocals and lead guitar and Marilena Plitsi on keyboards. Protonotarios has a guitar project, The Metalizer, where he takes television and movie themes and makes them into melodic heavy metal. (And you're welcome for the pitch.Without wanting to sound either cliche or condescending, Paladine essentially creates formulaic and derivative European model power metal. Their foundation is classic and traditional melodic heavy metal, adding the gallop of speed metal and the slight embellishment of symphonic metal. Twin guitar harmony in riffs and guitar lines is prominent as are the thrilling lead solos from Protonotarios. In several songs, like Dragonrider and Knight of the Black Rose, Paladine drops in some sweet acoustic guitar parts for accent. For the title cut and metal ballad, Finding Solace, the entire song turns on voice over those acoustic guitars. The bass and drum lines in the rhythm section have the power to propel faster songs like Dragonrider or The Metalizer, yet also give a song such as Master of Present and Past some infectious rock groove. In that song and the later Midnight Sky, the bass line introduces the song. The lead vocals are the typical metal variety with Protonotarios having an assertive, bit screamo at times, style, yet still remaining melodic and clean. When combined with harmonious backing vocals the vocal arrangement can be the catchy hook that makes the song click. Such is the case with Master of Present and Past, probably my favorite song here. What is notable by its near absence is the keyboard layer, which is barely heard throughout the entire album. It makes you wonder what contribution, if any, Ms Plitis adds to the band in a live performance.In the end, for a debut album, Finding Solace is a fine first effort from Paladine, a solid and entertaining platter of traditional European power metal. If you're a fan of the genre, as I am, you will want to check it out. Recommended. 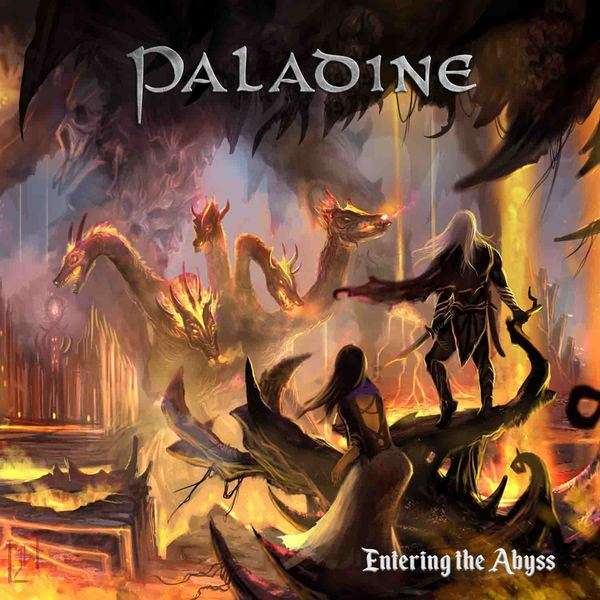 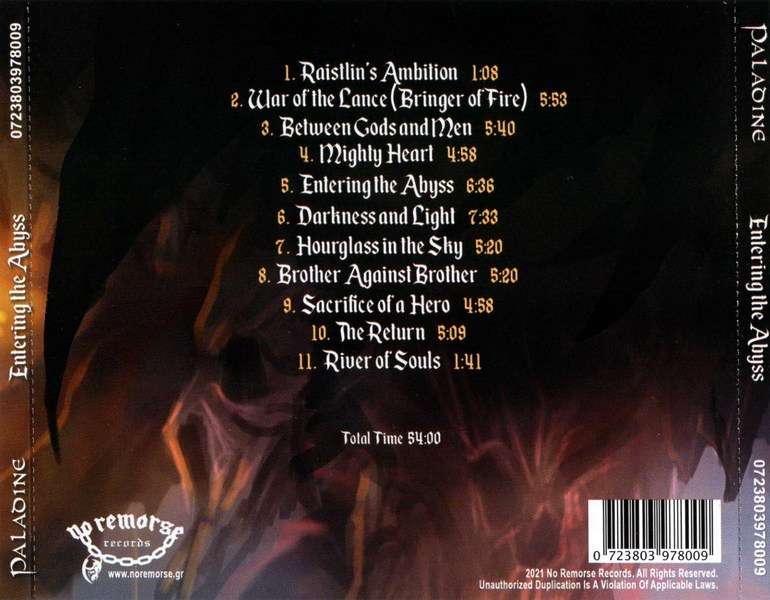 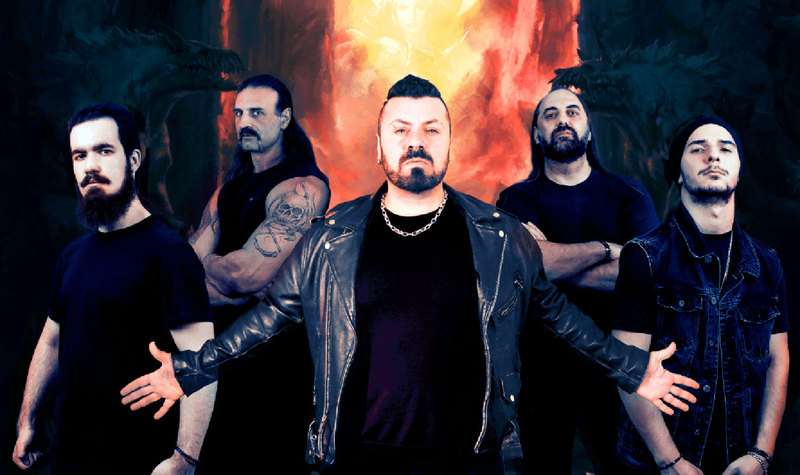 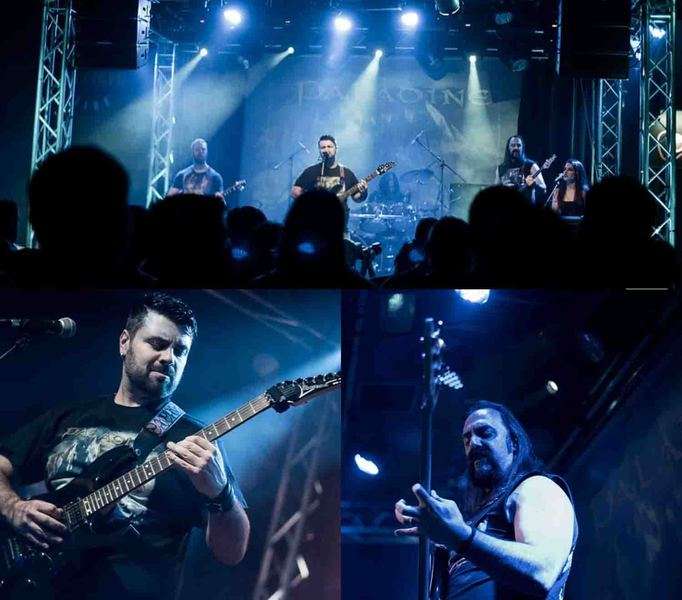 Heavy metal and escapism have been instinctive chums since day one, but a next level of camaraderie exists as it relates power metal (US and Euro variations), more so than any other offshoot in our genre. Speaking from the experience of an ancient who spent formative years throughout the 80s playing Dungeons & Dragons (1983’s Set 1: Basic Rules version) and Star Frontiers, watching The Beastmaster and Conan the Barbarian on loop, and reading most anything with name Margaret Weis and / or Tracy Hickman attached to it—nothing presented a more suitable soundtrack for adventuring as far from reality as possible than landmark albums such as Omen’s Battle Cry, Fates Warning’s Awaken the Guardian, Savatage’s Hall of the Mountain King, Queensrÿche’s The Warning, the key-keeping tales from Helloween, and a seemingly endless cavalcade of other records with themes that relied heavily on the chimerical.Questing past the Golden Era and into the modern age: Where other branches of metal have either curtailed or bypassed fantasy realms entirely, power and its closest sibling “traditional” metal have only increased the prioritization as reality continues to spiral out of control around us. Now, Crom be praised, we are blessed with an endless menagerie of bands venerating the forebears of yesteryear in new and largely not-so-new ways, and they do so while providing a similarly comforting escape from the horrors of today, even if just for 45-minutes at a stretch. Remarkably timely, really, as pandemic days have done their best to sever human connections, while a newfound and extremely vital connection to science fiction and fantasy through shows and virtual adaptations of Dungeons & Dragons have risen to the challenge and found ways to maintain and even strengthen relationships.As suggested by their namesake, Greece’s Paladine embrace the role of “power metal storyteller,” and their sophomore effort, Entering the Abyss, is primed and ready to either reunite or introduce the listener to a classic tale centered in the Dragonlance realm created by Laura and Tracy Hickman, and fully realized by Tracy and Margaret Weis through a series of novels that began with a trilogy: 1984’s Dragons of Autumn Twilight, Dragons of Winter Night (July 1985), and Dragons of Spring Dawning (September 1985). The band’s name itself relates to a pivotal Dragonlance character—Paladine, the “God of Good and Justice,” taking the form of a very helpful but bumbling wizard named Fizban in the Chronicles trilogy—and the record focuses on a storyline involving another principal character, Raistlin Majere, and his quest to become a god by defeating Takhisis, the Dark Queen.Stylistically, Paladine falls squarely in the power metal camp that draws heavily from the darker, more aggressive subset that bubbled up in the US throughout the 80s: Manowar, Virgin Steele, Savatage and the like. But there’s a clear Euro neoclassical power element afoot as well, particularly with regard to the heaps and slews of leads heard throughout—a key element in the Paladine quiver that never quite ends up feeling as if the express purpose is to eclipse the remaining components. Indeed, “balance” is an element Paladine seem notably adept at controlling, as most every song paints heaviness, atmosphere, darkness, light, intricacy and a straightforward hook with equal brushstrokes.When they’re at their heaviest—“Hourglass in the Sky,” for example—a noticeable thrash detail that certainly wasn’t unusual in early USPM springs to the forefront, but it still gallops well enough within trad / power realms that the closest resemblance lands somewhere between Yngwie’s Marching Out and the Kill to Survive-era of Meliah Rage, the latter of which becomes particularly evident when Paladine vocalist Nick Protonotarios puts a little extra gravel in his delivery. For the most part, though, the songs mix and match enough that the result ends up feeling rather unique, despite the truth that Paladine clearly do not count reinventing the wheel as an essential objective.The title track highlights the point in the story where Raistlin does indeed kill the queen and become a god (or wait…does he?? Plot twist! No spoilers, baby!), and it’s the sort of song that showcases a little of everything Paladine has to offer. A mellow and ominous flourish opens the track and slowly builds tension as a weighty riff eventually enters the picture. Then, the mood suddenly turns majestic, as melodic guitars and unobtrusive atmospheric keys elevate the listener right up to the point where a proggy riff abruptly grounds you again just after the one-minute mark. The bass work is wonderfully immediate and spry, and the infectious chorus—one of many on the record—drives the hook home and straight into the marrow.Every song showcases the above elements in some form or fashion, but the band swaps out embellishments consistently, so not every song will have proggy or thrashy notes painting the corners. What is very consistent, however, is Paladine’s emphasis on lofty melody, vocal hooks, and cramming the back half of songs with enough neoclassical leads to make your head spin.It would be ideal if I could say one needn’t be a power metal fan with comfortable knowledge of the Dragonarmies of Takhisis and / or things such as base attack bonuses from one level to the next in order to reap the full benefits of a record like Entering the Abyss, but let’s just go ahead and confirm that such things in any sort of combination (or on their own) would probably maximize the enjoyment factor. And to be perfectly honest, as a certified armchair psychologist, I’m comfortable stating that they’d likely help any Joe or Jane Shmoe attempting to survive in this harrowing new world of ours, even without Paladine offering up a perfectly suitable, melodic-as-hell companion soundtrack. But as long as we’re all here—down at the very bottom of this lengthy investigation and thinking about the benefits of escapism and great heavy metal—you might as well do the smart thing and give Paladine and Entering the Abyss some proper attention.