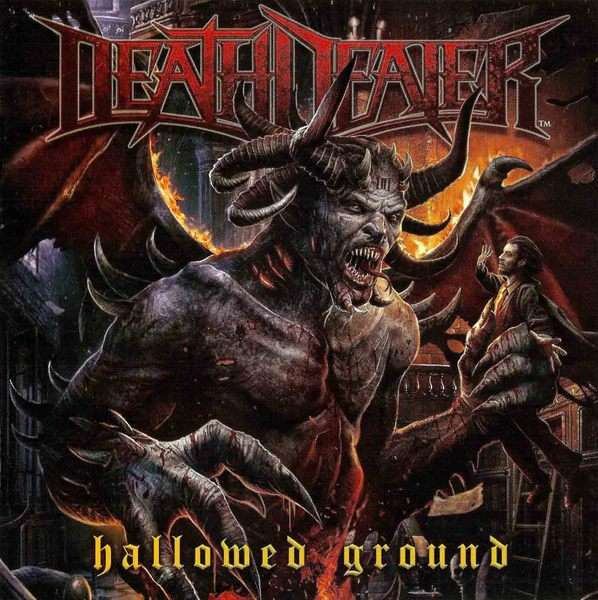 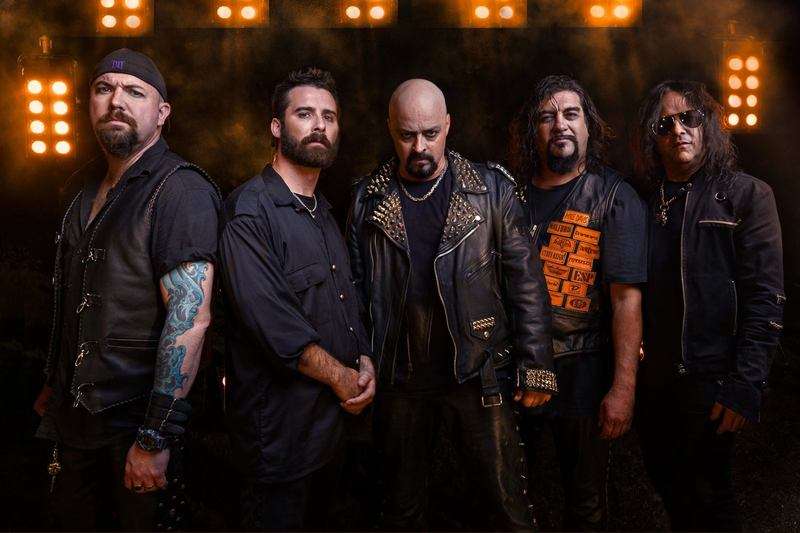 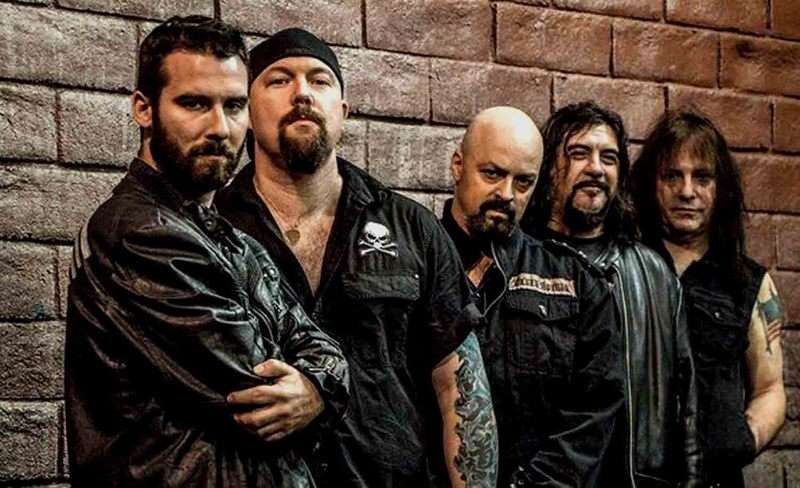 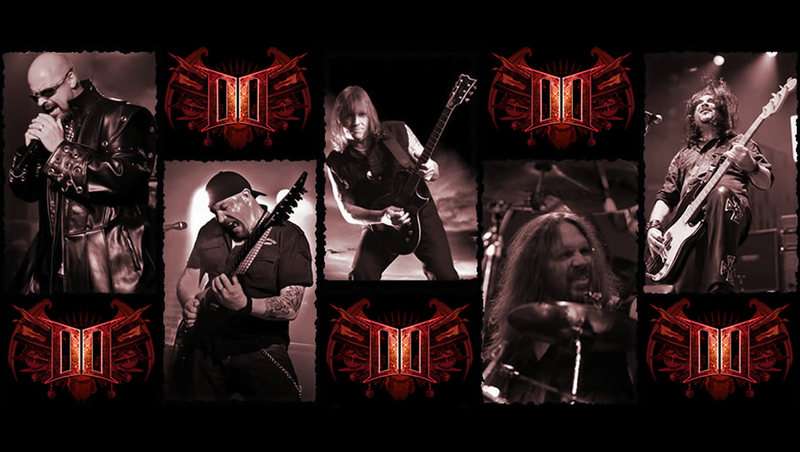 It's hard to argue with the pedigree of a band that includes members that worked with Manowar, the Dictators, Rob Halford, Lizzy Borden, Udo Dirkschneider, and Cage. And that's exactly who the members of the newly launched Death Dealer were previously associated with - vocalist Sean Peck, guitarists Ross the Boss and Stu Marshall, bassist Mike Davis, and drummer Rhino.As evidenced by their debut album, 'Warmaster,' Death Dealer's mastery of authentic metal has been put to use straight away. "The Death Dealer sound is a mighty combination of five very talented, seasoned musicians," explains Ross. "It's classic power metal with the brutal edge of thrash, speed, and precision."In an era where computer technology is king, it was through the internet that Death Dealer was formed. Ross: "Death Dealer formed early 2012 when Stu Marshall and Sean Peck who had collaborated previously, met Mike Davis and Rhino when on tour in California. Stu was blown away by Sean's vocal abilities and a bond was formed. Around February, Sean would send me messages on Facebook now and then, and Stu started talking to me as well. The conversation quickly went to, 'Hey Ross, would you like to play on some songs we've done?' I said sure, not knowing what it would sound like.""Well, after they sent the first tune over, I was blown away, then Stu and Sean tell me they want me to join this band, called Death Dealer. I say, 'Who else is in the band? They say, 'Rhino on drums.' I'm in! Stu goes, 'It was either you or we would have approached KK Downing to be on guitar.' Wow!" As heard on such tunes as "Death Dealer," "Never to Kneel," and "The Devil's Mile," for fans of authentic, no-holds-barred, manly heavy metal, 'Warmaster' is an absolute godsend. And soon, Death Dealer will be converting metalheads worldwide to their cause. "Our future plans? Obviously to put Death Dealer on the worldwide metal map, and to engage large crowds and render them shocked and satisfied."And according to Ross, fans attending Death Dealer performances can expect a set list that will draw upon more than just material from 'Warmaster.' "Death Dealer will play other tunes - especially some classic Manowar tunes that I have written. Also, you never know what cool rock n' roll tune we could deliver. This band is deadly serious, but humor and fun are a big part of our makeup."Make no mistake about it, Ross the Boss has returned with a vengeance, as heard throughout the killer debut release from Death Dealer, 'Warmaster.'With the debut slated for an early 2013 release, these five will forever be known as Death Dealer!

Ross The Boss: Does this legend require an introduction? While with Manowar, Ross not only influenced legions of aspiring musicians, but he was also part of classic albums that have sold more than four million copies worldwide. In addition to releasing two acclaimed albums with the Ross The Boss band, New Metal Leader and Hailstorm, he recently toured with ex-Dictator band mates as a member of Manitoba.

Rhino: This one-man wrecking crew built his reputation as the drummer for Manowar, Holy Hell and most recently Angels of Babylon. Rhino is also an acclaimed singer, songwriter, guitarist and producer.

Stu Marshall: The Sydney, Australia guitarist/producer achieved fame as the lead guitarist for Dungeon. He is also the mastermind behind Empires of Eden, which led to his working such metal heroes as Udo, Rob Rock, Mike Dimeo, Steve Grimmett, Zak Stevens and many more.

Mike Davis: Making a name for himself as the ‘go to guy’ in his days with Lizzy Borden, so when the Metal God himself, Rob Halford, put out a call for bassists, producer Roy Z knew Mike was the perfect fit. Known for both his abilities and killer live stage presence, Mike was also Death Dealer’s first and only choice.

Sean Peck: One of metal’s most illustrious voices, Peck recently celebrated his band Cage’s 20th anniversary. Referred to as “The man of a thousand voices,” he has been compared to such names as Halford and Dickinson, and this assemblage of talent allows him to show off every part of his God-given instrument.

Hallowed Ground is a very surprising album; it manages to be completely forgettable and average despite being made by one of the best lineups a US power metal could ever hope to have.Death Dealer boasts an absolutely fantastic lineup; with former members of such prominent acts like: Halford, Into Eternity, Dungeon, Cage, and Manowar. I hadn't heard the previous effort War Master, but was eager to get into this one solely based on the impressive lineup. What I was met with was an album that obviously owes its entire existence to Judas Priest and Mercyful Fate. Almost every song reminded me of one or both of these bands and if you are interested in this sort of hero worship then "Hallowed Ground" will definitely appeal to you in a big way.Sean Peck is definitely a technically impressive vocalist and has a fantastic scream, but an hour of his wails really started to bother me. I'm usually a big fan of over the top high pitched vocals and even surprised myself when I started to wish that he would be quiet for a minute or two and let the other instruments take over. A shorter album would have made me enjoy his performance a bit more. Unfortunately no other band member stands out at all throughout the entire album; guitars, drums and bass (while played well) could have been played by absolutely anyone and it's a definite waste of some great talent. These guys should definitely be more than capable of writing some excellent heavy metal that doesn't just sound like filler tracks from Primal Fear or Judas Priest. Ross The Boss is present of course, but he doesn't do anything special at all and his work in the 80's with Manowar is still the best thing he has done by far.So what is it that's actually wrong with the album? Well, let's start with the lyrics; "heavy metal 'til we die, heavy metal, you and I". Need I go on? I for one am absolutely bored of songs about how amazing heavy metal is. "The Anthem" is your standard "true metal" fare and its lyrics would probably make Joey DeMaio of Manowar blush. Writing a song about how awesome metal music is just seems like some space on the CD had to be filled and it's the easiest way to do it. Thankfully every song isn't like this, but the lyrics are still rather forgettable throughout. When it comes to the music, I would be lying if I denied that some songs have some nice riffs and solos. Tracks like "U 666", "I Am The Revolution" and "Plan Of Attack" definitely have their moments. "Skull And Cross Bones" is a rather enjoyable pirate themed track, but like all of the songs on this album it just reminds me of another band. Guess who? That's right...Running Wild. On the plus side, the band play the music very well and it isn't difficult to listen to. At nearly one hour, Hallowed Ground certainly drags on a bit. Getting rid of 3 or maybe even 4 tracks and having the album clock in at around 40-45 minutes could have improved things greatly. With 13 tracks, you are made aware of the fact that there aren't many ideas on show here and it starts to become samey very quickly. This means that little interesting pieces like "Llega El Diablo" are completely overshadowed by generic songs like "The Way Of The Gun". I praised Symphony X earlier in the year for having almost perfect track organisation and listening to Hallowed Ground actually makes me appreciate this oft-overlooked aspect of an album. You simply cannot say you enjoy an album if you are checking how long it has left and this is what I was doing numerous times with this album.So Death Dealer have failed to create something particularly memorable, but if you are a big US power metal fan, then you will probably find some enjoyable tracks here. I would definitely recommend this album to people who were disappointed in the latest Judas Priest effort Redeemer Of Souls, but leave your hopes for some originality at the door. Hallowed Ground is one of those albums you won't want to sit and listen to from start to finish, but might find yourself putting 1 or 2 tracks onto a random playlist. A very average album that should have offered something more based on its lineup.