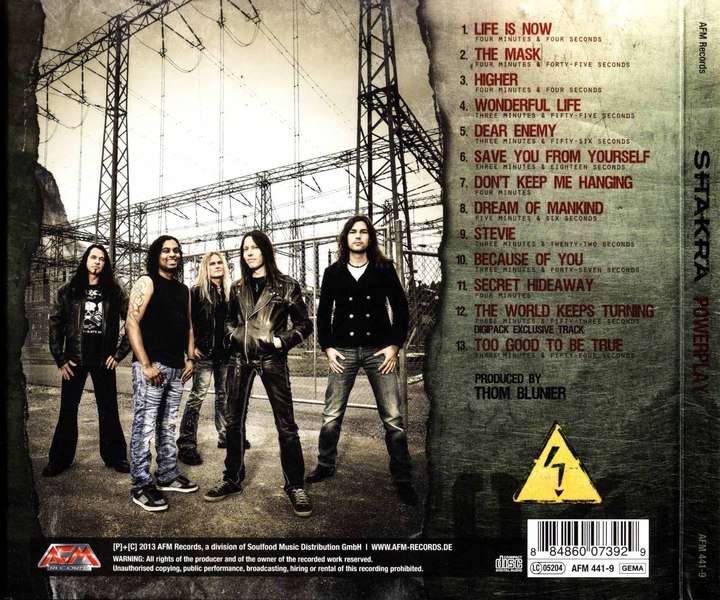 With their first releases "Shakra" (1997), and "Moving Force" (1999), and by touring with Great White and Uriah Heep, the early career of this Swiss band was a steep learning curve with dramatic success but the real breakthrough came with their third record "Power Ride" (2001) when singer Pete Wiedmer was forced to leave the band because of ill health, replaced by Mark Fox. Mark immediately put his stamp on the following album "Rising" (2003), which saw Shakra rise higher on the career ladder than ever before and hit the German and Swiss album charts. The band played several concerts and festivals, one of which was the prestigious "Bang Your Head" event. The controversial video clip for the song "Chains Of Temptation" showed singer Fox giving himself a heroin injection.And, after supporting Iron Maiden at the Swiss "Spirit Of Rock" festival, Shakra then took the decision to tour through 12 countries with HammerFall and Stratovarius. The band played a huge show in Zurich with Guns N' Roses in 2006.Shortly after the Everest album was released, Mark Fox left the band and was replaced by John Prakesh on vocals.New releases include "Back On Track" in Feb 2011 and "Powerplay" in Jan 2013.

Still carving a path through Switzerland's hard rock territory is Shakra with their ninth long-player, Powerplay. The title is appropriate. This is one of Shakra's heaviest albums, nearing the straight heavy metal side, thanks to an abundance of huge riffs and a pummeling rhythm section.While the riffage is bold and bombastic, Powerplay is not without it's melodic and accessible moments. Life Is Now, the opener, and the later Save You From Yourself, boast that metal heaviness in a quite catchy, hook-laden, arrangement. Then there's the two power ballads, Wonderful Life and Too Good to Be True, where Shakra tones it down revealing their inner mellow side. You also get your best feel for John Prakesh's vocal style, cross between Jon Bon Jovi and Bryan Adams.Mostly, however, Powerplay is simply brisk and bracing heavy rock album from Shakra. Dear Enemy, The Mask, Because of You, to mention some of the other songs here, explode at the start, sometimes racing, and generally rip it up until the end. If you like your hard rock on the metal side of things without dismissing melody and hooks, Shakra's Powerplay is your prescription. Recommended.