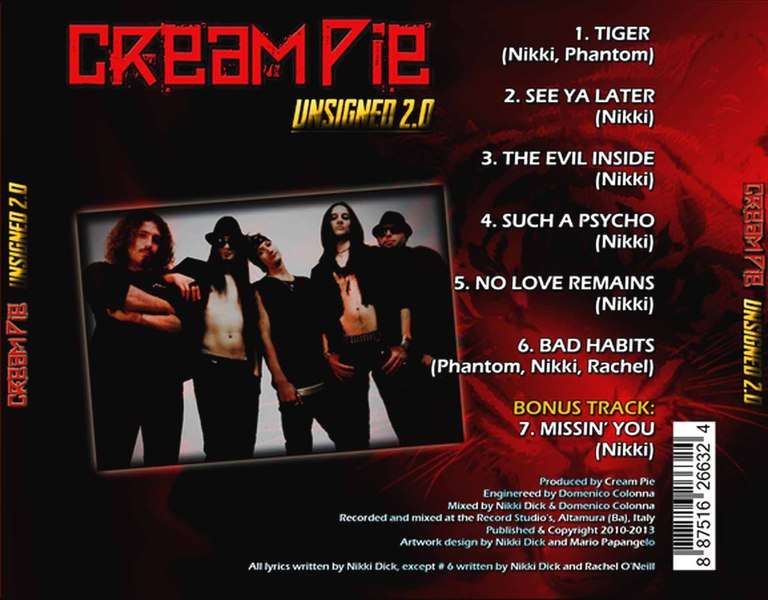 Cream Pie hooked up in 2005 in the south of Italy playin' a hard rock, sleaze rock, street metal genre the way bands such as Guns N' Roses, Motley Crue, Skid Row & L.A. Guns used to hit the charts back in the days with a new fresh modern rock sound & brought the dangerous rock 'n' roll back to the people!The band soon recorded a 4-song demo cd called "Live Crime" in 2007 and in 2008 and 2009 they toured twice the United States supporting their full-lenght album "Dirty Job" (2008).After playin' more than 200 gigs between Italy & Usa the band went back to the studio in 2010 to record a new EP "Unsigned 2.0" which was released on june 20th 2013.At the end of 2011 the band moved in Milan, Italy.Meanwhile the band kept on tourin' and had the chance to share the stage with the legendary Vain and L.A. Guns.In the spring of 2013 they released their first music video “Tiger” from the album “Unsigned 2.0” getting an impressive of almost 50.000 views on Youtube in the first month only.In 2014 Cream Pie announced the "Unsigned European Tour - sleazy rock fest" a 2-leg 33-gig tour in 10 European countries including Belgium, Italy, Spain, Czech Republic, Slovakia, Austria, Lithuania, Latvia, Estonia, and Hungary.In the beginning of 2015 Cream Pie signed a 2-year record deal with the Californian label Demon Doll Records (Vains of Jenna, Tuff, Alleycat Scratch, Shameless, Cats In Boots, Jetboy, Confess…) for the release of the cd “10 Years of Cream Pie 2005 - 2015” featuring a brand new song called “Fall To Rise Again”.At the end of February 2015 the band released a new music video “No Love Remains”, the second single from the album “Unsigned 2.0”.In june 2015 Cream Pie toured Europe for the third time with 10 gigs in Czech Republic, Germany, Slovakia, and Hungary.On May 2016 the band released the single "Downtown Pirates" which also included the cd version of "Fall To Rise Again" and a special acoustic live version of "Tiger" performed at Rock'n'Roll Radio.The brand new album will be released in September.

Nowadays we really get flooded with sleaze metal bands from all over the world. Since the "new wave of sleaze metal" many bands tried to find their place in this genre. The Italian band Cream Pie also wants its piece of cake (what a play on words, haha) and release their new album EP "Unsigned 2.0" on June 20th, 2013.Oh Cream Pie ... wtf? When I look at the band name I first thought this is just another band, that wants to do justice to all the cliches in sleaze metal. Yes, a cream pie can be some kind of cake, but on the other hand it's also a term in porn and I really can't take bands with such crappy names too serious. It's the same with "Nasty Dildoz" - just to give you another example. I'm always wonder if those bands really take care about their music or if it's just all about the image of the "bad boys from the block". This is just mortyfying.I know in Sleaze you always want to have a dirty attitude, but please not so shaby. Look at band names like Crashdiet, Skid Row or ToxicRose - these are also cool names without any sexual meaning. Even Steel Panther, who always sing about sex, don't use this in their band name. But ok, this is a matter of taste and will not influence my final rating, because it's all about the music here. So let's get right into the songs."Unsigned 2.0" contains 7 songs in the vein of early Mötley Crüe, Skid Row, L.A. Guns and all the other well-know sleaze acts from the 80's. For sure, Cream Pie give their songs an updated production and with this they remind me at the street metal of Hardcore Superstar.The opener "Tiger" is the first proof of what I said above. This song opens the album in a very good way, because this is a really cool shout-along sleaze party-anthem and the best song on this EP. So the direction is clear ... and they won't change throughout the whole playtime of 28 minutes."See You Later"is not as good as the first track, but also a rough rockin' tune for your next metal party."The Evil Inside" sounds much darker than the previous tracks and brings some kind of punk attitude with it. Liked this one very much."Such a Psycho" starts calm like a ballad, but developes to a straight rocker in the chorus. Anyway this is one of the more quiet songs on "Unsigned 2.0" ... I would call it half-ballad.After those 4 songs I can say that the voice of singer Rachel is not really my cup of tea. It's just typical for this type of music and solid, but to me he whimpers too much. On "No Love Remains" you can hear that very clear, but the track itself is solid and Cream Pie try to add a more epic note here."Bad Habits" is the next typical "shout it out loud"-track. No sleaze album without a song with "whooooo's" in the chorus, so this tune will also please each street metal fan."Missing You" closes the album and is a bonus track and to me this is the weakest track on the album. It doesn't rock so hard like the previous songs.So what can I finally say about this EP. It's solid! I think this descirbes it the best. The production is solid and rough, the musicians are in really good shape and also the songmaterial is very solid, sometimes even more than this (the opener "Tiger"), but you won't find something that blows you away. Therefore you have heard most of this stuff before from other bands.But I think this isn't too bad, because with just one album ("Dirty Job") and now this new EP this band is still in development.Cream Pie deliver high-energy sleaze metal, like in the good old days and if you like those stuff you can't go wrong with "Unsigned 2.0". I think if Cream Pie can mange it to give their songmaterial a more unique note (to stand out of the mass of sleaze metal acts) and find a good label to promote them, we could hear a lot more of this band in the future. I mean, you guys are from Italy - so try to get a deal with Frontiers Records. They've Crashdiet and De La Cruz under their banner, perfect home for you.So fans of Hardcore Suerpstar, Skid Row or Mötley Crüe - keep your eyes open for Cream Pie!