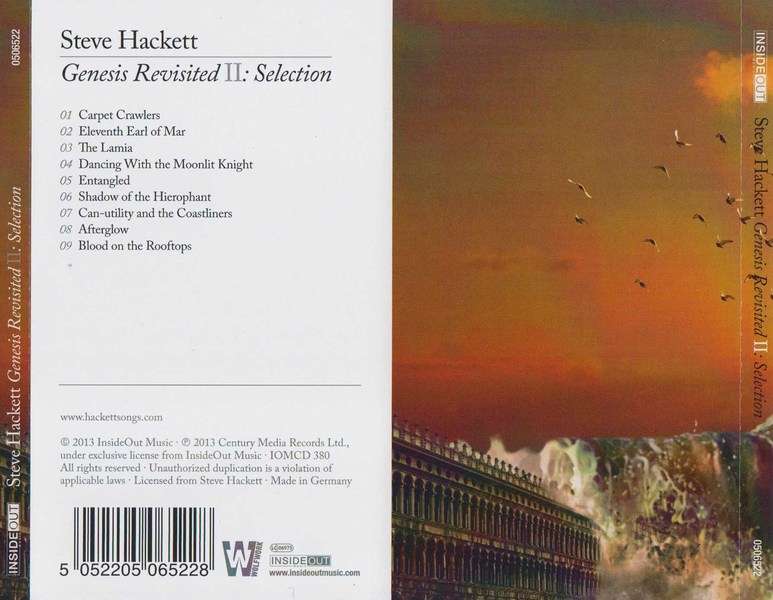 Stephen Richard Hackett (born 12 February 1950) is a British singer-songwriter and guitarist. He gained prominence as a member of the British progressive rock group Genesis, which he joined in 1970 and left in 1977 to pursue a solo career. Hackett contributed to six Genesis studio albums, three live albums and seven singles.In 1986, Hackett co-founded the supergroup GTR with another progressive guitarist, Steve Howe of Yes and Asia. The group released a self-titled album that year, which peaked at #11 on the Billboard 200 in the United States and spawned the Top 20 single "When the Heart Rules the Mind". When Hackett left GTR in 1987, the group disbanded.After leaving GTR, Hackett resumed his solo career and has released albums and toured on a regular basis since. His body of work has encompassed many styles, such as progressive rock, world music, and classical. playing has influenced guitarists such as Eddie Van Halen, Alex Lifeson, Brian May and Steve Rothery. He was inducted into the Rock and Roll Hall of Fame as a member of Genesis in 2010.

The Night Siren is the twenty-fifth studio album from English guitarist Steve Hackett, released on 24 March 2017 by Inside Out Music.The album was recorded within one year.Hackett explained that his writing comes from a three-person team of himself, his wife Jo, and his keyboardist and co-producer Roger King, with Hackett discussing and exchanging initial music and lyric ideas with the other two. When an idea is settled upon, music would be sent to the other performers or Hackett would travel to them and have their parts recorded on location.Hackett recorded the album by means of recording straight to a computer, rather than recording from an amplifier as he likes "to be able to have a conversation over the top of it and it can still sound very heavy". By connecting his amplifier and pedal board to the computer, Hackett experiments by "trying as many different setups and sounds as possible".The album features numerous artists and instruments from a variety of countries, including vocalists Kobi Farhi and Mīrā ‘Awaḍ, from Israel and Palestine respectively, and a sitar from India, a tar from the Middle East, the charango from Peru, which Hackett brought home after visiting the country,and the uilleann pipes from Ireland.Hackett did not intend to incorporate such elements of middle eastern and world music at first, but his interest in such music had started in the 1960s and realised the album began to take such a direction when the songs were being developed further.Parts of the album was recorded in Sardinia and Hungary, and involved a session of musicians from Iceland, Azerbaijan, Israel and Palestine working side by side, "proving that it is possible for people not to just coexist in peace but also do something extraordinary artistically together".The album will be released on 24 March 2017 through Inside Out Music.It will be available on CD, a double vinyl set with a CD, a digital download, and a special edition CD and Blu-ray, featuring a 5.1 surround sound mix and a "making of" documentary."In the Skeleton Gallery" was released on 4 February 2017.Hackett will support the album with his Genesis Revisited with Classic Hackett Tour through 2017, to commemorate the album and the fortieth anniversary of the Genesis studio album Wind & Wuthering (1976), the last one recorded with Hackett in the band.