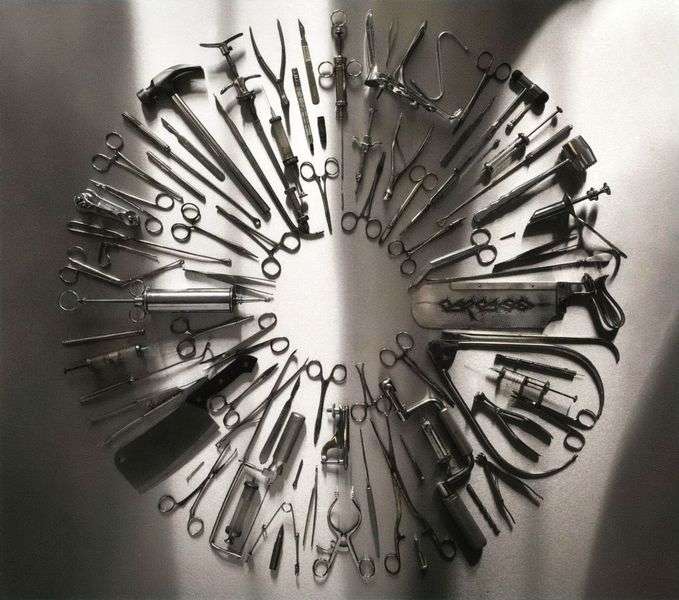 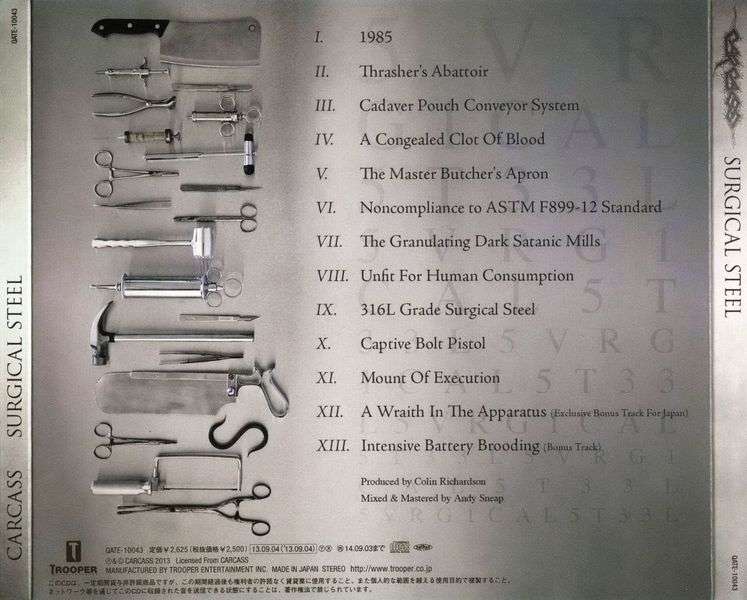 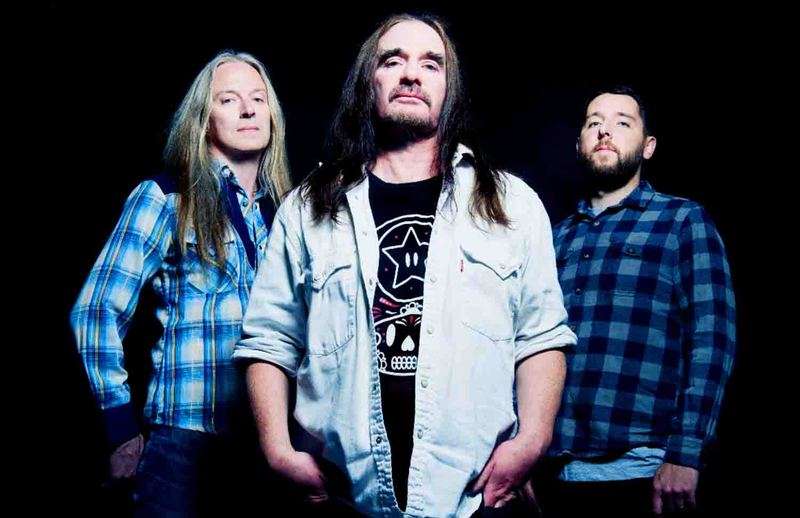 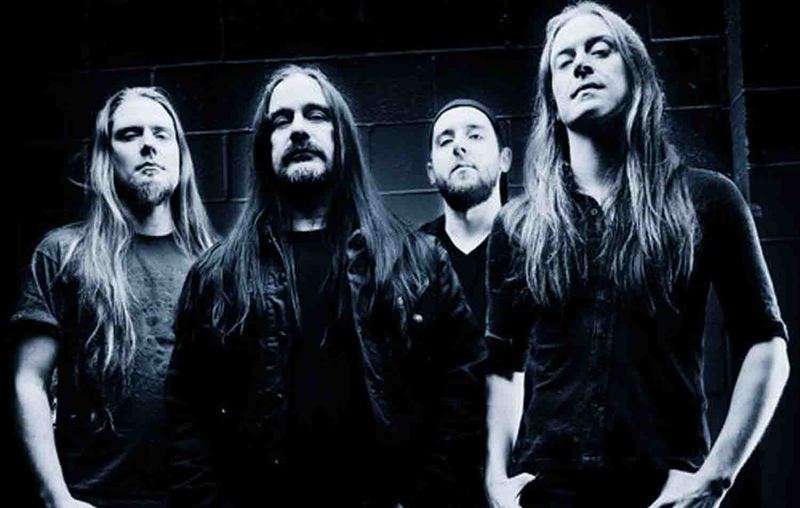 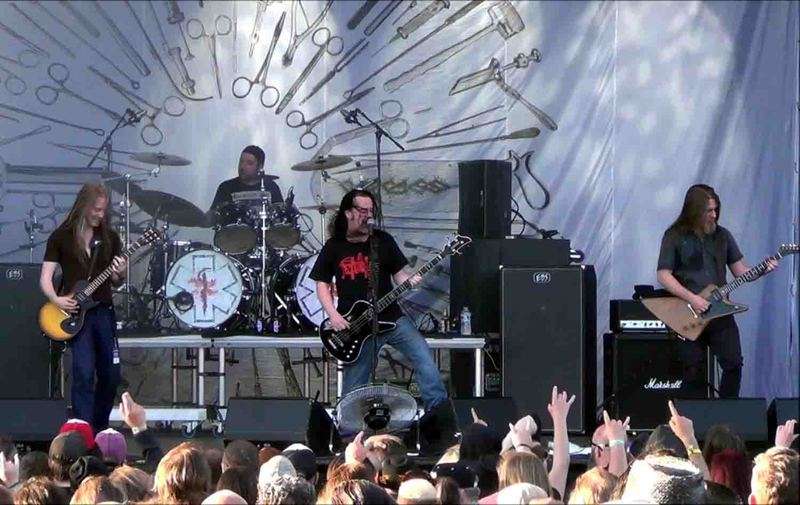 Carcass are a British extreme metal band from Liverpool, who formed in 1985 and disbanded in 1995. A reformation was enacted in 2007 without one of its original members, drummer Ken Owen, due to health reasons.Although widely regarded as pioneers of the grindcore genre, their early work was also tagged as splatter death metal, hardgore, and goregrind; on account of their morbid lyrics and gruesome album covers. However, they also became one of the pioneers in the subgenre known as melodic death metal with their 1993 album Heartwork.On the early albums, the band focused on topics mostly relating to the medical field and bizarre combinations of medical equipment and chemicals with human anatomy, such as "Intenacious, intersecting / Reaving fats from corporal griskin [...] Skeletal groats triturated, desinently exsiccated". This lyrical focus led many in the music press to falsely believe that one or more members of the band had studied medicine. There is more evidence to show that this lyrical focus was a method of pushing vegetarianism (For example, "Exhume To Consume"). Typical Carcass song titles from their early work include "Lavaging Expectorate of Lysergide Composition" and "Microwaved Uterogestation."Having started their career as a goregrind band, Carcass gradually changed their sound and lyrical content. Starting with Necroticism - Descanting the Insalubrious, the careful listener could hear music theory experimentation beyond the atonal noise of previous work and the music of their peers. Their best-known album, Heartwork, was largely devoid of the gory lyrics and grind style that had been present on their earlier recordings, with a cleaner, more melodic sound, but retaining occasional forays out of more complex harmonies into amodal grind.After the release of Heartwork, Carcass received a worldwide deal with Columbia Records, who wanted to try to commercialize the band. They attempted to convince Jeff Walker to learn how to sing, but Carcass stuck to their guns and were uncompromising. Some fans regarded the evolved sound as proof of the sellout they had expected. In contrast, many were very receptive to what was perceived as a new zenith of talent and composition in death metal, showing a command of motif development and harmony that is underappreciated even within the metal community. In fact, today some credit Carcass with being a very early founding influence for not just one, but two genres of metal - grindcore (or, more specifically, goregrind), and the melodic death metal sound. Michael Amott left the band right after Heartwork was recorded and was for a while replaced by Mike Hickey who was later replaced by Carlo Regadas. Carcass broke up after releasing Swansong, which drew some criticism from fans for its melodic riffs which in some ways bordered on late 1980s thrash. Their last album also incorporated some melodic elements (Tomorrow Belongs to Nobody) and some doom metal elements (Don't Believe a Word) which almost completed the Carcass circle of being one of the most inventive metal bands.Ken, Jeff and Carlo continued with the Blackstar project accompanied with former Cathedral bassist Mark Griffiths. Blackstar (Later Blackstar Rising) went defunct after Ken suffered from a severe brain haemorrhage. Michael Amott went on to found hard rocking combo Spiritual Beggars and Arch Enemy, a successful Swedish death metal band. In the biggest musical departure, Bill Steer reappeared in Firebird, a Claptonesque guitar-rock trio.In June 2006, in an interview with Walker, he discussed the possibility of reforming Carcass, but it is unlikely that Steer will participate.

Carcass is known for constantly innovating and featuring new styles in each release. "Reek of Putrefaction" and "Symphonies Of Sickness" both spawned an entire subgenre. This album is basically a continuation of the melodic approach that Carcass left on "Necroticism..." and "Heartwork", with a polished and modern twist.This is incredibly emotional music. Emotionality is an odd feature to find in a death metal album, isn't it? Let me explain myself. Every single track is an incredible golden nugget of raw passion. Every solo, every melody is chock-full of sensibility. The sorrowful instrumental "1985", the brutal grinding on "The Master Butcher's Apron," the fierce power chords in "Captive Bolt Pistol"... it all bleeds excellence and elegance.The music flows like a river; nothing is contrived, repetitive, or trite. The entire album is incredibly engaging and has an uplifting atmosphere. Their first albums evoke a wide range of emotions (from disgust to nostalgia to sorrow), but "Surgical Steel" just summons positivity and energy.There is a fair bit of experimentation, too. "Mount Of Execution" is over 8 minutes long and features Spanish-style classical guitars; it the most extensive song Carcass has ever recorded. There are old-school thrash metal influences; Megadeth was clearly a huge inspiration here. The main riff in "Unfit For Human Consumption" is very reminiscent of "Holy Wars". "Noncompliance..." (which is one of the greatest songs I've ever listened to, with no doubts) showcases progressive influences similar to those present in "Hangar 18".I really have to show my respects to Jeff Walker. His dry, monstrous growling is exactly the same as it was in the late 80's. His lyrics are extremely complex, featuring themes such as animal abuse, science, and medicine. The necrotic, gory, in-your-face topics present in their first two albums are nowhere to be seen here.The guitars are oddly groovy and very catchy; riffs like the main one in "316L.." immediately get stuck in your head. I guess some people could call it a sell-out, but I really couldn't care less if the music was created solely for profit, because they did an amazing job.The only track that doesn't stand out is "A Congealed Clot Of Blood", mainly due to the fact that it is the slowest song in the album, and doesn't really bring anything interesting to the table. It's not bad at all, but it showcases how Carcass is much more comfortable playing at higher speeds.Truly an amazing work. I really don't know how Carcass is going to top this.