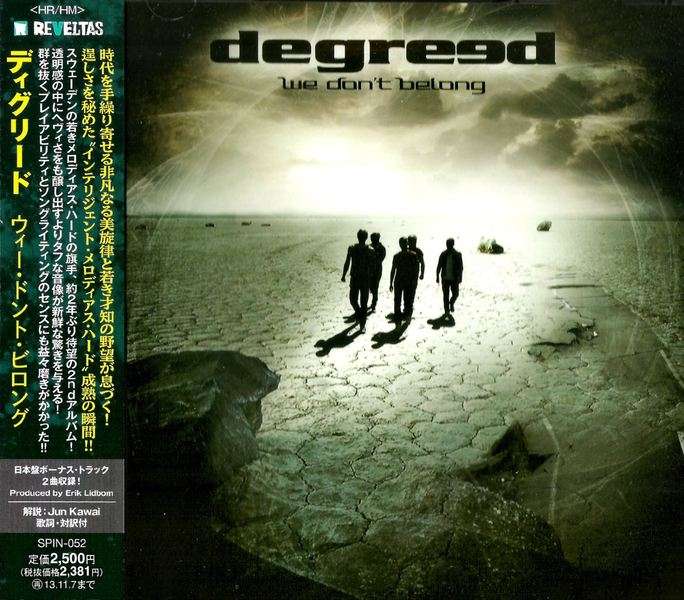 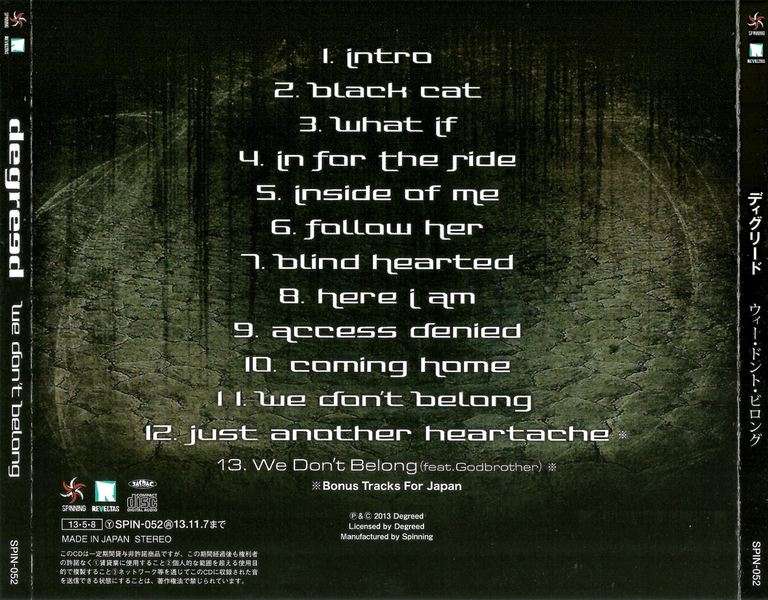 Degreed is a Stockholm based Melodic Hardrock band formed in the beginning of 2005.Before degreed even released their first album they managed to tour Scandinavia and Germany, getting sponsored by legendary brands like Hagström and T-Rex, share stage with greats like Europe, Turbonegro, Millencolin among others and represent one of the largest musical instrument distributors in Europe – Musik Meyer on the largest public music fair in the world back in 2007.After many years of touring and gaining fans the band released their critically acclaimed debut album ”life,love,loss” in the fall of 2010 through Melodic Rock Records (Europe/USA), Spinning INC (Japan) and Rambo/Sony Music Entertainment (Sweden) which was followed by a tour in Sweden and a UK tour alongside VEGA.“..this first DEGREED album could well become THE album of the year!” – Gabor, MyGlobalMind.com (9/10 stars, Nov. 2010)Having recorded the first album with producer Erik Lidbom the band choose the easy way on the second studio album “We Don’t Belong”, having him to produce that one as well.Although on “We Don’t Belong” Erik also wrote/co-wrote a few songs for the album, amongst them two together with multiplatinum and Grammy Award winning singer/songwriter Bill Champlin (former singer of Chicago, songwriter for Earth, Wind and Fire etc.). Bill Champlin sang on the Chicago nr.1 hit “Look Away” as well as singles “You’re Not Alone” and “Hard Habit to Break“. On the second album by degreed Bill sings a verse in the song “In For The Ride”. Erik is also the best selling songwriter in Japan with over 16 million sold copies of the work he has done.“We Don’t Belong” was released on the 2nd of September 2013 and already that month it made “Album of the Month” in the 157:th issue of Brittish Powerplay Magazine. By the end of 2013 the album had received great reviews and also “Album of the Year” by Mårten Cederberg at Rocknytt.net.The single “What If” from the album has reached over 30 000 plays on Spotify and the video for the song as well as the video for the second single “Inside of Me” have reached over 15 000 views on YouTube.“We Don’t Belong is a near perfect slice of modern melodic rock which proves the future of the genre is very healthy. I was totally blown away by it and can’t stop playing it; I could get really fanatical about these guys.” – The Midlands Rock, Aug 10 – 2013 (10/10)In 2014 the band signed a management deal with Sun Hill Production and has since then been opening shows for Dan Reed Network on their shows in Sweden 2014, played Väsby Rock Festival and Special Guests at the Swedish Sid-Metal band Machinae Supremacy‘s European tour 2014 which took the band to countries like Poland, Czech Republic and Germany.The band just got back from a UK tour along with Australian White Widdow and Brittish Night by Night and have just finished the upcoming album “Dead But Not Forgotten” which will be released July 19:th through Sun Hill Production.

DEGREED has surprised me three years ago, with a little jewel called “Life Love Loss” the band was revealed to the world by Andrew McNiece from MelodicRock.Com who signed them in the rooster of his small record company…In 2011, this splendid album was reissued in Japan with bonus tracks (with a great rendition of OZZY’s hit "Bark At The Moon") and a new cover art. So, I had some high expectations for this brand new album and most of it was fulfilled: As always the band delivers that special mix of AOR / Modern Rock with a serious playing level. The external songwriters as legendary Bill Champlin (ex-CHICAGO) & Eric Lidbom (also doing a great job as Producer and backing vocalist) are also very suitable in helping to keep the melodic intensity and the stylistic diversity as main focus.What strikes the most is their sheer abilities to refresh the classic old AOR recipes with elements borrowed from Pop (“Inside Of Me” / ”Access Denied”), Prog Rock (“Follow Her” / ”We Don’t Belong”) or Scandinavian melodic Metal (“Black Cat“) with still a solid constancy in their sound. Robin Ericsson is definitely a strong Lead Singer who delivers a full throttle performance all along the record, and who manages to keep a unity in the different musical ingredients that are melted together perfectly here.I believe that the band holds a great potential in the genre, if they have the chance to collaborate with a right promotion work team, they could reach the higher states in the new Scandinavian Revival scene ruled by H.E.A.T. / THE POODLES or BROTHER FIRETRIBE / THE MAGNIFICENT Etc…If you don’t want to follow the flock, then be curious, please: don’t miss it!!!