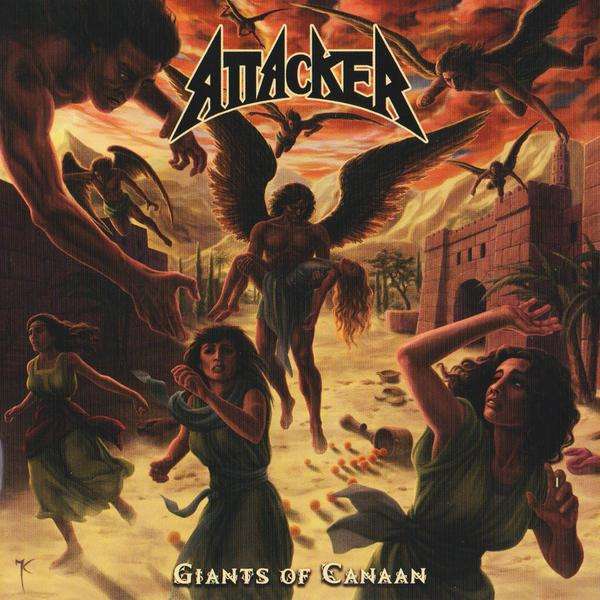 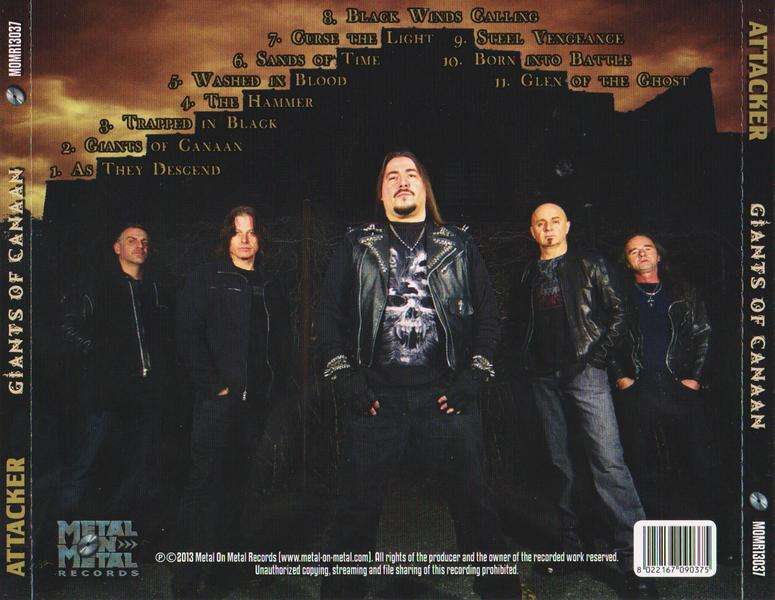 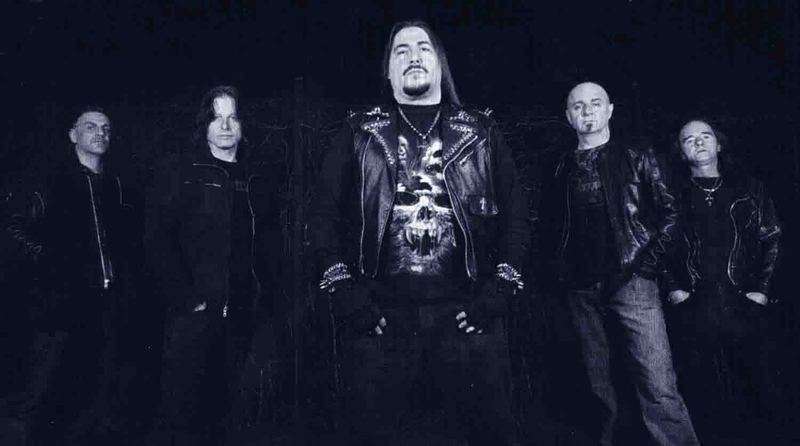 ATTACKER: The Lords of Thunder! .. Formed in the summer of 1983, ATTACKER is one of the first Heavy Metal bands to use the literary works of J.R.R. Tolkien as a source of inspiration. An awakening that, eventually, would become the now classic "Battle At Helm's Deep" album. In recent times, the band has enjoyed one the best comebacks to ever occur in many years! The band has now come, quite literally, full circle and is back where they belong. Throughout their career, the band has amassed an incredible worldwide following, thanks to timeless Heavy Metal Classics such as the aforementioned "Battle At Helms Deep", "The Second Coming" and their comeback Classic "Soul Taker"! .. In 2004, ATTACKER established themselves as one of the great live bands when they performed their now legendary showcase at the KEEP IT TRUE Festival in April of that year at Tauberfrankenhalle, Lauda-Königshofen, GERMANY along with their headlining debut at the HEAVY METAL MANIACS Festival in October of the same year at Manifesto Hall in Hoorn, HOLLAND. In recent years, members of the International Press and Heavy Metal fans worldwide have lauded their efforts both on album and, especially, the live stage! .. Upon their return from HOLLAND, the band has kept, for the most part, a low profile in as far as their live shows are concerned with the exception of their still talked about performances in GERMANY in July of 2005 at the HEADBANGERS OPEN AIR and THRASH TIL DEATH Festivals. A trek that was highlighted by a special performance of the entire "BATTLE" album which took place at the world-renowned Head-Bangers Ballroom in Hamburg. .. Aside from conquering Europe, once again, the band kept an intense studio schedule while creating the, then, soon to be released new album "THE UNKNOWN"! During the making of their new album, Lou Ciarlo returned to the band in a full-time capacity. For the benefit of those of you that don't know, Ciarlo, was the member responsible for penning the bands Power Metal classic "The Second Coming" as well as co-writing most of the highly successful come-back "Soul Taker" album. .. 2006 is now in the proverbial "record book" as this was the most monumental year in the bands history! With bassist Lou Ciarlo back in the fold, in support of their, then, new album, the band embarked on their most ambitious road schedule to date with appearances on both sides of the Atlantic, including a tour of Europe. The band visited the countries of GREECE, ITALY and HOLLAND. .. The tour culminated and was highlighted, on September 16th, 2006, by their headlining performance at the SWORDBROTHERS FESTIVAL in Andernach, GERMANY, to which, at the end of their set, the fans gathered on stage and joined the band in a rousing rendition of one the bands signature songs "The Hermit". The band next appeared in Europe at the KEEP IT TRUE X Festival, once again at the Tauberfrankenhalle, Lauda-Königshofen, GERMANY on Friday April 4th, 2008. Following the bands' KEEP IT TRUE X performance, Bob Mitchell was let go from the group. As already mentioned, throughout their career, the band has built an incredible worldwide following, thanks to timeless heavy metal classics and great live performances. The bands legend continues to grow and they are now set to bring their brand of Metal Mayhem to the masses and make history. ..once again in 2007/2008! Heavy Metal fans around the globe have witnessed greatness! Have you??? .. 2012 will be a year of rebirth as ATTACKER enters the next chapter featuring new vocalist Bobby "Leatherlungs" Lucas and new bassist Jon Hanemann, who replaces the departed Lou Ciarlo...ARE YOU READY!!

It them long enough, for me it seemed like another type of break, just like the one after 1989, but as it would seem, the steel fist of the ATTACKER will never rest, and there will be endless pounding for us all. The American ATTACKER have always been one of those bands that showed me the true essence of American Metal music. While disregarding, almost completely, from nowadays trends and twists, these guys have been consistent with their style and display even more than their old US Metal guard peers like METAL CHURCH, VICIOUS RUMORS, CAGE, MALICE, SLEEPY HOLLOW, early HELSTAR and SEVEN WITCHES. Actually it kind of surprised me since the US scene, even the old school reincarnation, became something different than what it was in the 80s, you might check out HOLY GRAIL as the best possible reference though WHITE WIZZARD, over time, did show quite an appreciation for the old NWOBHM movement. However, I knew that ATTACKER's new emergence would not inflict damage upon their newly released album, "Giants Of Canaan", through their new album Metal On Metal Records. Frankly, a few years ago, I was rather startled to hear that Bob Mitchell, probably ATTACKER's greatest lead vocalist, left the band, probably to focus more on his old shebang SLEEPY HOLLOW. Nonetheless, it was great to know that the crew recruited the great maniacal shouter Bobby "Leather Lungs" Lucas (OVERLORDE, ex-SEVEN WITCHES) as the latest addition to the vocal front.Observing closely knee deep within "Giants Of Canaan", the first thing that came out creeping right before me was the band's sound. Although seeming a bit produced, it was hard to shake that old amazing feeling of the debut self-titled release of METAL CHURCH and old HELSTAR released embracing a crispy production that might be thin, as most sound affiliations of the 80s and not to be contrasted with today's pompous productions, but with a type of magic that is so blissful yet also evil and bloody under the white hood. The second thing that have always been a point of attraction when it comes to ATTACKER is their way to mixture Epic tales and legends, once mostly influenced by J.R. Tolkien, along with bone crushing Heavy Metal, once was more known in the golden years as US Power Metal. It seemed that the main emphasis that embraced the band’s material has been the melodic implementations. I really enjoy a good solid heaviness, ranging between Heavy, old Power and slices of Thrash, but deprived of those tasty melodies, sweet harmonies and kick ass soloing cracking up the midnight air with an IRON MAIDENish fashion, it would have never been that attractive and high rated. Furthermore, Leather Lungs’ vocals also took me back to cherished memories of the late David Wayne (METAL CHURCH) and Carl Albert (VICIOUS RUMORS), but also a few hints of among the living Ripper Owens, James Rivera and even a touch of Michael Kiske, smothered with a malevolent, fiendish kind of layer spewed right from the down below corridors of the 80s, right in your expecting face filled with fear."Giants Of Canaan" created more than just inspiring moments of classic Metal, it inhibited a sort of class that sadly plenty of modern oriented Metal bands, which some have been trying to relive the past and failed miserably, lost while trying to come out with something decent. I won’t necessarily call this album a theatrical showcase as it was rather punchy for, but it felt somewhere near. I was emblazoned by “Sands of Time” providing a short overview of the history of Heavy Metal and how it came to power. Some things should be preserved and protected. I liked the riffing, great chorus, tons of power and quite a performance on the lead work. “Steel Vengeance” and "Giants Of Canaan", displayed as a semi Thrash smacker, followed by a cool steam of melodies and quite a vocal showcase. “The Glen of the Ghost” is an absolute epic, such an IRON MAIDENish nature of the later stages of the band’s career, an astounding feature to end this album. I could even listen to a slight Dickinson fragments on Leather Lung’s vocals. I can go on and on but I will live something for you boys and girls. In a nutshell, a great release of true 80s Metal made in the USA, shame there aren’t too much of the kind nowadays, creative melodies, fine vocal line, cool arrangements of both straightforward and epic features, a must for every home.