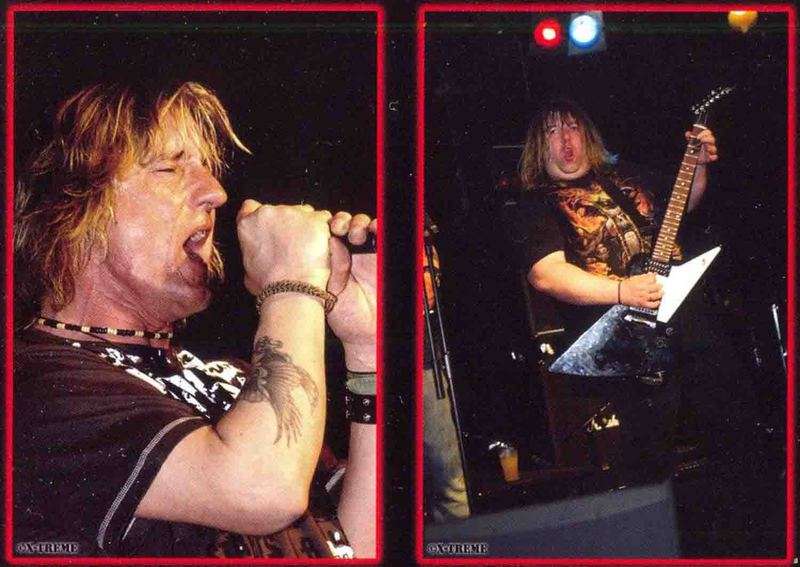 We we are back after 15 years and presently recording our second album. Mainly play in the Midlands and at Biker events these days, but we do enjoy coming home on occasion!!Slander was formed in 1990, following a last minute request from the Blackpool Gazette to make up the numbers for a local Rock Battle, in Blackpool, Lancashire, United Kingdom. Andy Saxon-Lamb and Steve Slater were given 24 hours notice to recruit musicians and rehearse their set.After rehearsing through most of the previous night, they hammered out a 30 minute set to an unsuspecting crowd. From the positive audience reaction it was clear that their brand of heavy metal was a winning formula. Andy and Steve then recruited musicians with similar ideas to themselves. First to join them was Andy Gregson on rhythm guitar, who played with them at the rock battle gig. Then Andy “Eddie” Edwards on the drums and finally Joe Tyerman, joined following a number of unsuccessful attempts at recruiting a suitable bass player.The band then started working on new material and began to play gigs all over northwest England. During the first 6 months of the band being together, they recorded their first demo tape Initial Penetration, which sold all 300 copies in a matter of months and was well received not only in the UK, but also in Europe and the USA.In late 1990 Slander’s 'Fighting Talk' appeared on Radio 1’s Friday Rock Show’s ’ Rock Wars’. The feature showcased the talents of unsigned bands and was hosted by the late Tommy Vance. Unfortunately, they were runners up, but this only spurred the band on to return to the studio for 2 more sessions.The band are currently writing and demoing tracks for their 2nd studio album and have just finished recording a mini covers album just to introduce our fans the the new voice of Slander that is Si Staples and the top class bass playing of Pete Hewitt. Just gotta sort out the cover etc and we should be releasing it soon. Thanks to everyone who has bought an album and to those who have supported us and travelled to see us during the past few years.

All tracks were recorded at Assemblyline Studios, Preston, Lancashire, England between May 1990 and May 1991. This album is compiled from the best demo recordings.SLANDER is an interesting band. On these two discs, you have two versions of many of the same songs. The first batch on disc one was recorded way back in 1990 and on the second disc the recordings are from the current year of 2011. The main difference in the songs is the production. It is amazing how similar they sound when separated by so many years.Their bio sheet lacks a ton of information in terms on anything that happened after 1991. As a matter of fact, it says absolutely nothing about the year 2011 other than what you see here, which consists only of the song titles and the order in which they are played. That is it, nothing more. I am left shaking my head at this whole thing. Why would the record company not mention the contents of the second CD, why it was recorded, who plays on it, and so on.All of that preamble aside, this is very good look at the raw sounding heavy metal that came from England in the late 80’s. There is a ton of energy and punch to the songs. None of the songs were written to receive airplay, this is an underground heavy metal band that had self financed all of their albums (demos) until this year. What you have here is the best of their demo sessions. That much is stated in their biography. I love me some old school metal from England. Many of my favorite bands come from there, SAXON, BLACK SABBATH, IRON MAIDEN, DEEP PURPLE, and JUDAS PRIEST. England is the birthplace of heavy metal and it seems to be in the DNA of the country’s population. SLANDER isn’t as good as the bands I mentioned, but the formula is there. The main difference is the production and overall sound quality.SLANDER has many of the lyrics to their double CD release in their promo and they are quite good. Not every song has lyrics, but the ones that do show that SLANDER knows what they are doing. One great reason to buy this record is to hear the re-recordings and the stand alone songs. You have a wide variety of music with a very long running time of over 90 minutes. I am not saying this is a cheap best of compilation, it is full priced and it is worth it. This is a band that fell in the cracks and got lost. They remind me of ANVIL, great music, but for decades no one seemed to get it. Of course SLANDER doesn’t have a documentary movie release to bring them into the public eye, but they do have a similar past of being totally unappreciated. Hopefully SLANDER will get a second chance with their return to the metal scene.Overall I have to recommend this album. If you like it old school with nothing but Bass, Guitars and Drums, and a raw sounding production, then you will really enjoy it. The vocals are the strongest part of this double CD. I honestly can’t believe that Steve Slater wasn’t in high demand. He really has a great voice and makes it a joy to listen to his singing. Sometimes these retro releases are like finding a lost piece of treasure; this is one of those times. SLANDER rocks.

Please my link you can spread further and don´t upload to other hostings!!!