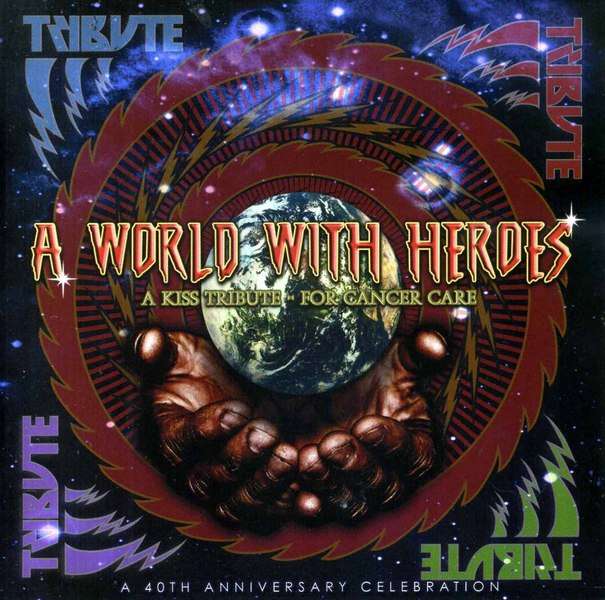 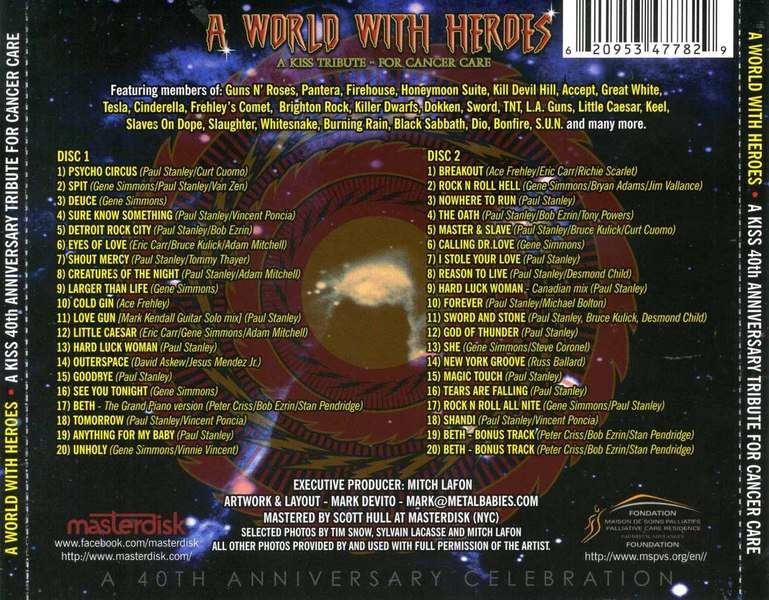 Here’s “A World With Heroes: A KISS Tribute For Cancer Care”, the project started by Rock journalist Mitch Lafon who has gathered some of the greatest Hard Rock musicians for a tribute album.‘A World With Heroes’ features unique performances of known and obscure KISS / solo members songs, with pledges made through being used to make this amazing tribute come to life and to benefit The Vaudreuil-Soulanges Palliative Cancer Care hospice.This 2xCD release is out of print now. Pledgers received as well a pack of Exclusive Bonus Tracks, never put on sale and collectors items only here.Perhaps the question is; Do you really need another Kiss tribute album? Do you? Yes, you do. Why? For the following reasons: – Obscure track selections. – Very good cover versions – Brighton Rock reuinited for a recording – Superstar performers including Don Dokken, Tony Harnell, Terry Ilous, Tommy Denander, Jeff Paris, Ron Keel, Vinny Appice, L.A. Guns, Doug Aldrich’s Burning Rain, Bonfire, plus Firehouse, Cinderella, Tesla, Great White, and more members.– Members of the Kiss family including Eric Carr, Frehley’s Comet (minus Frehley), Bob Kulick and Phil Naro (Peter Criss Band).I can’t say enough good things about this compilation. Upon first sight, it had enough rarities from artists I liked, as well as Kiss obscurities, to make it a must-have. Hearing it, I’m blown away repeatedly. It is a heady brew of hits and deep, deep cuts.A lot of material, so I’ll point out some personal favourite moments.I’m a huge fan of the ‘Revenge’ album, and I’m a huge fan of Accept. Hearing Mark Tornillo do his thing through “Spit” was awesome. I think the man’s vocal cords must be made of steel or something for him to sing like that.I also loved “Sure Know Something”, although I don’t know much about Chris Buck & Anthony Cardenas Montana. It’s a slinky version, very true to the original but with a Rod Stewart vibe.Jeff Paris does a pretty authentic “Shout Mercy” and I give him full points for doing a Monster tune, the newest Kiss song on A World With Heroes.I’ve loved Brighton Rock since I was a kid, but I never expected them to unplug “Creatures of the Night”. This twist takes a moment to get used to, but their haunting arrangement is very original and cool!“Larger Than Life” from Alive II is revisited by Brian Tichy and friends, and they do it pretty straight to the original, almost lick for lick. It’s great.I love that Ron Young from Little Caesar sings “Little Caesar”, a nice wink and a smile there. A band called Shredmill contribute their original song “Outerspace”… which was later covered by Ace Frehley on his ‘Anomaly’ album (giving himself a writing credit). Shredmill’s version is more dark, where Ace’s was more Ace.On the second CD, surprises and highlights continue.Ron Keel and friends from Tesla and Cinderella knock it out of the park on “Rock N’ Roll Hell”, with a nod at the start to Keel’s own “The Right To Rock”.Rick Hughes of Quebec metal legends Sword helps blow the doors off “The Oath”, a favourite from The Elder. The L.A. Guns guys (Phil Lewis included) tackle the difficult “Master & Slave” from Carnival Of Souls, and it smokes. They do it authentic to the original but with Phil’s snarky vocals.As a Killer Dwarfs fan, I’m always pleased to hear Russ Dwarf’s nasally twang, and he turns in a solid “Hard Luck Woman”. (Meanwhile, another bunch of L.A. Guns guys did their own version on disc one.)Bonfire contribute a live version of Paul Stanley’s unreleased song “Sword & Stone”. American Dog did something special: they covered the Paul Stanley version of “God of Thunder”, not the Gene Simmons take from Destroyer. They do it the speedy rocked-up way that Paul originally demoed.Talented Jim Crean does justice to “Magic Touch”. He’s almost Joe Lynn Turner style on this one.The second CD ends with two takes of “Beth” (Chris VanDahl sounding like the hoarse Peter Criss on Alive II, and Phil Naro). This is in addition to Michael Lardie’s (Great White) grand piano version on disc one.But wait, that’s not all, folks.Pledgers who pre-ordered the CD several got bonus tracks. If you missed the boat on these, you can’t get them anymore.Artwork – Mark Devito.Executive-Producer – Mitch Lafon*.Mastered By – Scott Hull.