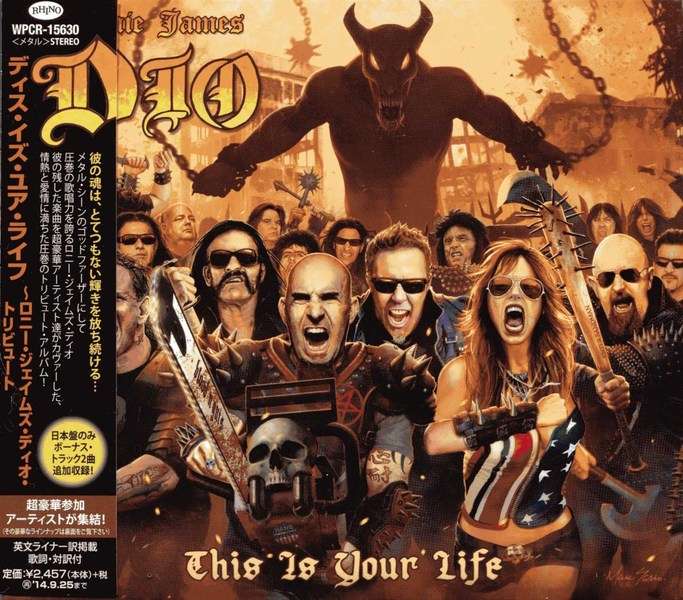 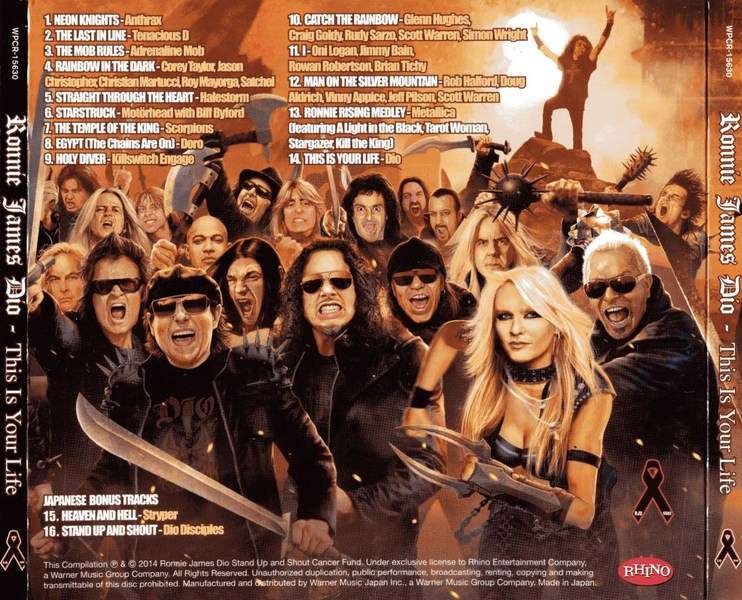 To celebrate one of rock´s most powerful voices, an all-star group of his friends and fans recorded 13 of their favorite tracks for a tribute album that will raise funds for the Ronnie James Dio Stand Up and Shout Cancer Fund. Produced by his longtime manager and wife Wendy Dio, the album includes contributions by such metal heavyweights as Metallica, Motörhead, Scorpions, Anthrax, and Rob Halford, as well as appearances by many of the musicians who performed with Dio over the years.To celebrate one of the most powerful voices ever in Rock, the great RONNIE JAMES DIO, an all-star group of his friends and fans recorded a bunch of favorite tracks for a tribute album entitled “Ronnie James Dio ; This Is Your Life”. This Japanese edition include two bonus tracks, a 16 page booklet with complete info, and we have added the digital release exclusive bonus track as well.Produced by his longtime manager and wife Wendy Dio, the album includes contributions by such metal heavyweights as Metallica, Motörhead, Scorpions, Anthrax, Glenn Hughes, Rob Halford, as well as appearances by many of the musicians who performed with Dio over the years.“This Is Your Life” truly is a worthy tribute to the life and works of Ronnie James Dio, in particular full of memorable vocal performances.The album begins in rip roaring fashion as big four thrash legends Anthrax tear their way through “Neon Knights” from Ronnie’s time with Black Sabbath, with Joey Belladonna sounding as good as he has for years, if not decades, as he pays tribute to one of his biggest inspirations.The usual comedy stylings of Tenacious D’s music are nowhere to be found as they play it straight to great effect with their take on the Dio classic “The Last In Line”, while monster Russell Allen’s tremendously powerful voice helps to power the Adrenaline Mob take on “The Mob Rules”.Corey Taylor has assembled an all star band including Steel Panther’s Satchel and Stone Sour drummer Roy Mayorga to tackle the seminal Dio hit “Rainbow In The Dark” and they do a rocking version.Halestorm, with the power and passion of Lzzy Hale’s voice on a cracking version of “Straight Through The Heart” rocks one imagines Dio himself would have raised a smile and/or a pair of horns to them in response.Two of the most distinctive voices in the history of British heavy metal join forces on the next truck as Saxon frontman Biff Byford teams up with Lemmy and Motorhead for a version of Rainbow’s “Starstruck” that thoroughly oozes rock and roll attitude from start to finish.Admirable versions of the Rainbow classic “Temple Of The King” (from Scorpions) and Dio song (Egypt / The Chains Are On) from Doro follow before the most famous Dio cover around in the metal world makes an appearance; Killswitch Engage’s 2006 cover of “Holy Diver”. Lauded since the band recorded it eight years ago, it holds up well in it’s current esteemed company and deserves to be enjoyed once again.Moving towards the end of the album, “Catch The Rainbow” is performed by an ensemble lead by Ronnie James Dio’s fellow Black Sabbath alum Glenn Hughes (also notably of Deep Purple amongst many other projects) and it was an ideal choice as Hughes voice is a very good fit for the most prog based track on this album.“I” is another Dio song given a worthy makeover while staying true to the original, courtesy of a group containing Dio bassist Jimmy Bain and singer Oni Logan, while “Man On The Silver Mountain” sees The Metal God himself Rob Halford front a band of Dio members past and present including Vinny Appice and Doug Aldrich in another enjoyable effort.Special word must be afforded to Metallica’s “Ronnie Rising” medley; a sprint through four different Rainbow songs – “A Light In The Black”, “Tarot Woman”, “Stargazer” & “Kill The King”, it pays ultimate respect to the early part of Ronnie’s career.It is, quite frankly, the best Metallica have sounded in a very long time (not the crap they have been doing in their last albums), with James Hetfield more energised on record than he’s sounded since 1991 and the passion in the performance is palpable in every note. Metallica wanted to do something special for Ronnie and they certainly succeeded here.The final word, quite rightly, is let to Ronnie himself with a very special performance of the track “This Is Your Life” from the Dio Angry Machine’s album. With only a piano for company, the listener is treated to Dio’s voice in a setting very different to how it would usually be heard and it is an entirely fitting conclusion to what must be one of the best rock or metal tribute / compilation albums ever.To paraphrase Dio’s own words, the flame won’t last forever for any of us, but by being able to enjoy his music, Ronnie James Dio has made things more magical for millions and this album represents that brilliantly.As said, “Ronnie James Dio ; This Is Your Life”, is one of the best tribute albums appeared in many, many years.