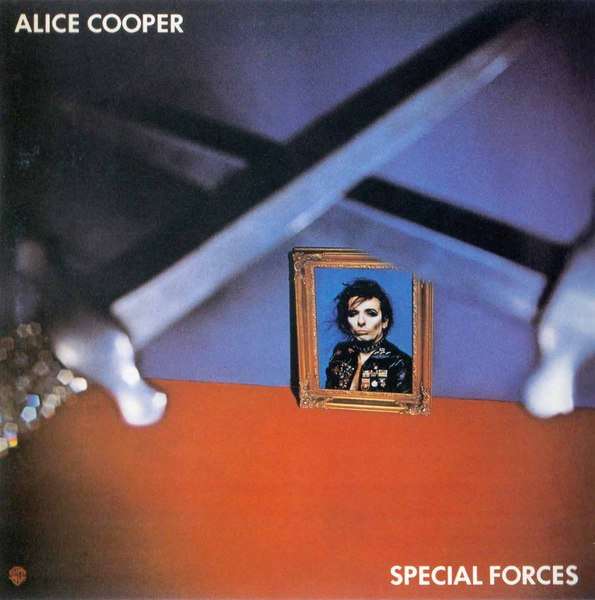 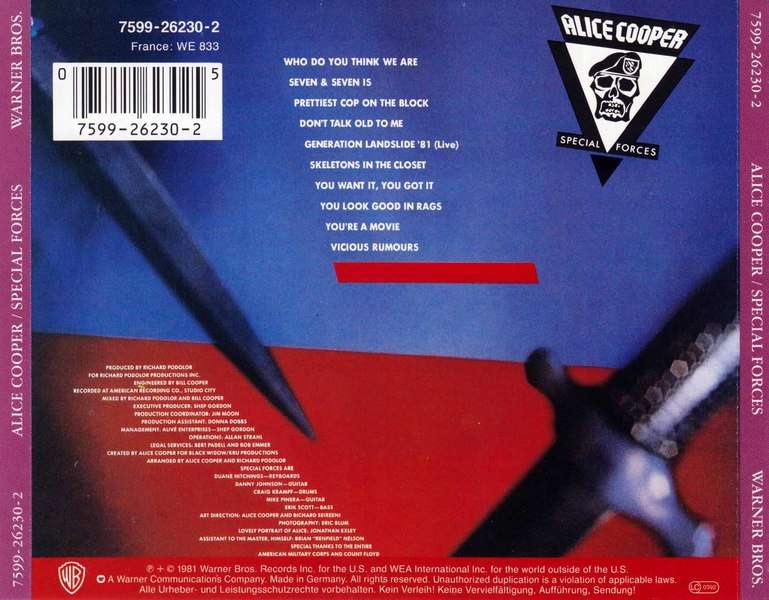 Special Forces is the sixth solo album by Alice Cooper, released in 1981, and was produced by Richard Podolor, most famous as the producer for Three Dog Night. Singles included “You Want It, You Got It”, “Who Do You Think We Are” and “Seven and Seven Is”. Flo and Eddie, former members of The Turtles, performers, and radio personalities, performed on this album.Alice Cooper appeared on The Tomorrow Show with Tom Snyder to promote the album, being interviewed and looking very gaunt in full military-drag make-up, after which he played live versions of “Who Do You Think We Are” and “Seven and Seven Is”. Cooper toured Special Forces through USA, Canada, France, Spain and the United Kingdom, but other than the aforementioned songs he played no further Special Forces songs live, except for snippets of “Vicious Rumours” at a few shows in the US and Scotland.With the exception of “Who Do You Think We Are”, which was a regular part of setlists during the Eyes of Alice Cooper tour in 2004,none of the songs from Special Forces has been performed live since 1982.French television special Alice Cooper a Paris was recorded in January 1982, before the start of the Special Forces European tour - Cooper's first tour of Europe since 1975. The tour was a major success.Special Forces is the first of three albums which Alice refers to as his "blackout" albums, followed by Zipper Catches Skin, and DaDa, as he has no recollection of recording them, due to substance abuse. Cooper stated “I wrote them, recorded them and toured them and I don’t remember much of any of that”,though in fact he toured only Special Forces.The Special Forces tour, ending in February 1982, would be Cooper's last for over four years, as he succumbed to the abuse of freebase cocaine and a subsequent relapse of alcoholism, until his return to the road in October 1986 with "The Nightmare Returns" tour. “Look at You Over There, Ripping the Sawdust from My Teddybear”, was listed on the album packaging, but was removed by Cooper from the album itself before the release, as he felt it didn't fit with the overall theme. It was later released in demo form on the 1999 box set The Life and Crimes of Alice Cooper, and again in demo form on the 2010 reissue of Special Forces. There is a completed studio version of the song which remains unreleased.“Seven and Seven Is” was a cover of Love's original, written by Arthur Lee.