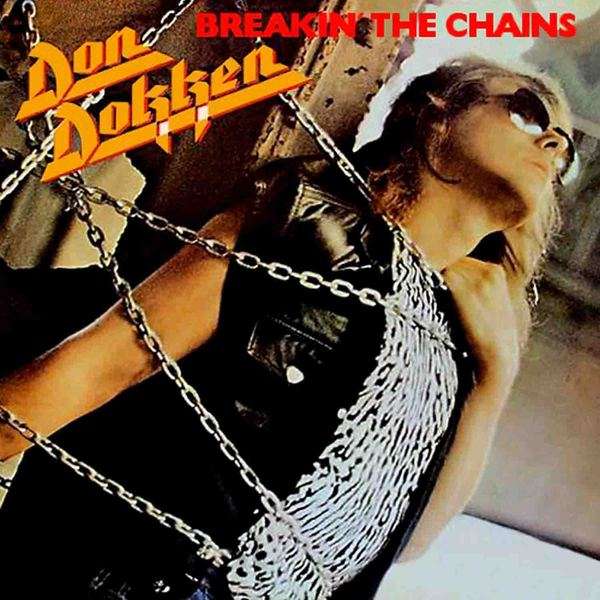 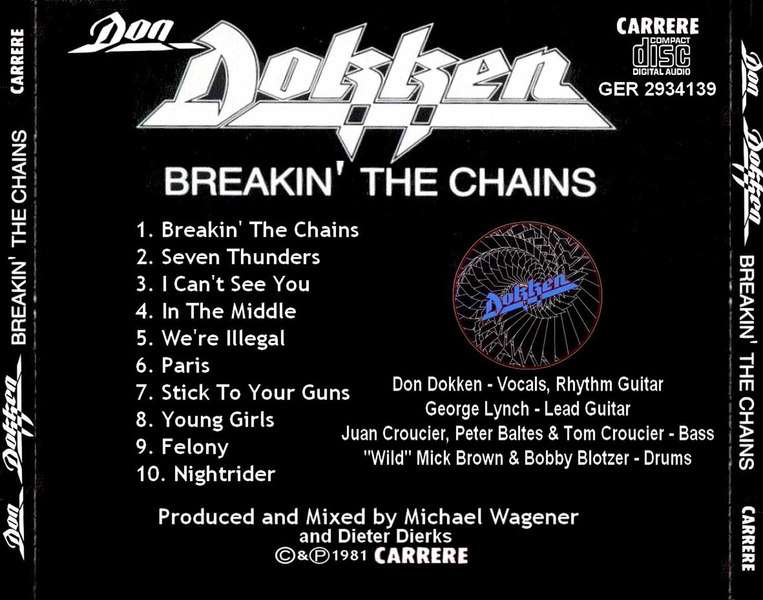 Donald Maynard "Don" Dokken (born June 29, 1953) is an American heavy metal vocalist, best known for being the lead singer, occasional guitarist, and founder of the band Dokken.He is known for his vibrato-laden, melodic vocal style which has made him an influential figure in American hard rock and heavy metal. After enjoying mainstream success with Dokken, he parted ways with the band in 1988 and pursued a solo career.His 1990 solo album, Up from the Ashes, featured Europe guitarist John Norum and spawned two singles. He and drummer Mick Brown are the only remaining original members of Dokken.Don reformed Dokken in the early 1990s and has been continuing on with the band ever since. He released his second solo album, titled Solitary in 2008; it was a stylistic departure from his Dokken material.In the late 1970s, Don Dokken was playing in a Los Angeles-based band called Airborn, and had the opportunity to reach a record deal in Germany. After seeing the band Xciter, and future bandmates George Lynch and Mick Brown, he knew that they would complete the band that would land the record deal. Although Lynch and Brown were not interested in joining forces with him when he first contacted them, he went ahead to Germany. Don, with the help of one of Xciter's songs, did get the record deal, and he finally convinced Lynch and Brown, along with bassist Juan Croucier, to join him in Dokken soon after he received it.During his time in Germany, Dokken befriended the German band Scorpions, and sang with them in rehearsals for their Blackout album while lead vocalist Klaus Meine was being treated for nodes on his vocal cords. Meine recovered and returned to record the album, although Dokken's background vocals remained on several tracks.In 1983, America saw the release of the first Dokken album, Breaking the Chains which had a moderate reception. However Juan Croucier left the band to join Ratt. Jeff Pilson was brought in for their second release, Tooth and Nail, and at this time metal fans and critics began to take notice of the band. Don's strong, melodic vocals, coupled with Lynch's blazing guitar playing, guided Dokken to national fame.In the late 1980s, however, personal tension between Dokken and Lynch took its toll on the band. In 1988, after the Monsters of Rock Tour and a further platinum album, Don Dokken decided to break up the band and they went on their separate ways.Don Dokken originally wanted to continue on with the Dokken name, but since Lynch maintained partial ownership, he was forced to put out his next album under the Don Dokken name, and it became known as his first solo album. The album, titled Up from the Ashes, was released in 1990, and was very similar to the Dokken catalog. This project was a supergroup of sorts, made up of guitarists John Norum (of Europe fame) and Billy White ( of Watchtower fame), bassist Peter Baltes (of Accept fame), and drummer Mikkey Dee (of King Diamond and Motörhead).Both Dee and Baltes had previously been members of Dokken during the late 1970s for brief periods. Two music videos were made for the singles "Mirror Mirror" and "Stay". Also, during the late 1980s and early 1990s, Don spent time as a producer for the metal band XYZ.He also made a guest appearance on the German progressive metal band Vanden Plas's Spirit of Live album as the vocalist for their live performance of Dokken's "Kiss of Death" with which the studio version can be found on Vanden Plas's "Far Off Grace" album.Around late 1993, Don started to talk with Mick Brown, who had recently left George Lynch's new group, Lynch Mob. They joined up with Jeff Pilson, and started to write new songs. In 1994, they sent what they had written to George Lynch, who was impressed with the material. Together, they decided to reunite and tour again. This reunion lasted for three years and resulted in two new Dokken albums, an acoustic live disc, and a full live concert recorded in Japan in 1995.In the late-1990s, Dokken once again parted ways with George Lynch, gained guitarist Reb Beach, and later kicked off a new era with guitarist John Norum after the departure of Reb Beach. That union didn't last long as Norum departed quickly to re-unite with Europe. Norum was briefly replaced by Italian guitarist Alex De Rosso for the live tour [1] until Don managed to find a permanent replacement and in 2003 Guitarist/Lawyer Jon Levin filled that position where he continues to this day at Don's side.Since 1994, Dokken has released six studio albums, two live albums, a Greatest Hits album, as well as their first two DVDs. Don Dokken released a new solo album titled Solitary in 2008 and Dokken released a new album titled Lightning Strikes Again during the same year. On March 1, 2010, the band Dokken's second greatest hits album, aptly titled Greatest Hits, was digitally released to iTunes and Amazon.com. The physical album with additional tracks is set to release from King Records (Japan) on April 21, 2010 and will be available in the United States through Cleopatra Records at a later date.

This is the original 1981 Carrere records german pressing of the original Don Dokken's "Breakin' The Chains" wich has the studio version of "Paris (AKA "Paris Is Burning") and "We're Illegal" (Later with re-recorded vocals and lyrics wich would be known as "Live To Rock (Rock To Live)"), also the bass parts were not recorded by Ratt's Juan Croucier but Accept's own Peter Baltes and some of the drum tracks we're recorded by Ratt's own Bobby Blotzer.Back in 2012 i downloaded the WAV vinyl rip from a blogspot called Hear Rock City blogspot through Megauploads.com (Wich was shutdown due to the goverment finding out that the owner was puting hiden links to pirated movies wich were'nt released yet to DVD or Blue-ray) so the WAV vinyl rip has not yet been re-uploaded so here i am providing a re-upload link through my 4shared acount!.

Produced and Mixed by Michael Wagener