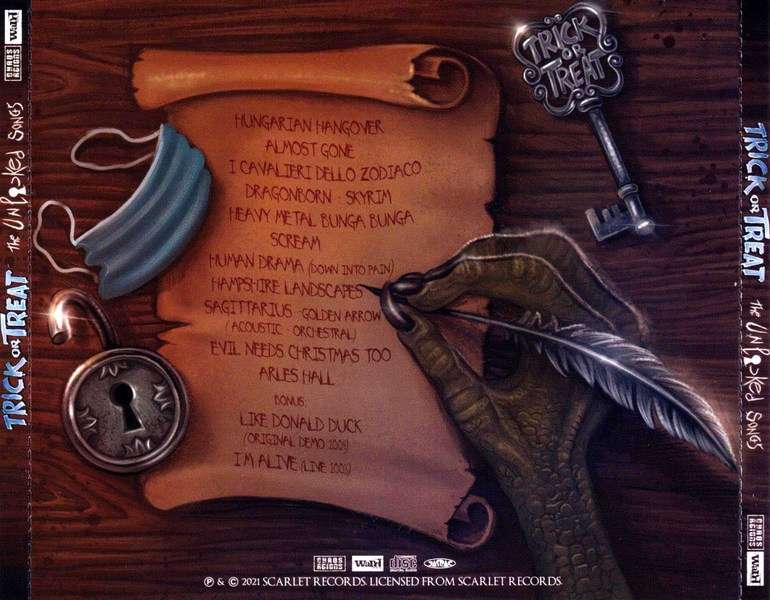 TRICK OR TREAT are a crazy bunch of musicians: they are one tight power metal band and they sure deliver the goods on stage, but they also like to share some fun with their audience – that’s why everybody loves them.Formed back in 2002 by lead guitarist Luca Cabri and initially performing as a tribute to Helloween, they quickly got very popular and played the most renown live clubs around Italy: after a couple of intense years on the stage, they recorded the “Like Donald Duck” 4-piece demo and signed a deal with Valery Records for their first full-length, named “Evil Needs Candy Too”, which came out in 2006. The debut got a terrific response and put TRICK OR TREAT back on the road for the following two years, playing over 100 gigs in Europe and U.S.A.Nevertheless, the guys kept writing more songs and in 2009 they gave birth to their second LP, called “Tin Soldiers”, which features Michael Kiske (Helloween, Place Vendôme) on two songs and Michele Luppi (Vision Divine, Killing Touch) on another one: as expected, the record receives a brilliant feedback on the scene (for instance, it breaks on the Japanese charts at the 29th place) and the band plays some top festivals, like the Agglutination, the Palasharp I-Metal Fest and the Italian Gods Of Metal. Last but absolutely not least, TRICK OR TREAT have also been recently selected as opener band for Helloween’s “The 7 Sinners World Tour 2010/11” together with special guest Stratovarius.In early 2012, Luca Turilli announced that the Trick or Treat’s singer Alessandro Conti is the new lead singer of the band “Luca Turilli’s RHAPSODY”. the first album: “Ascending to infinity” is already a hit in metal-charts all over the world.In the 2012, Trick or Treat come back with a new album, a concept inspired by the novel of Richard Adams “Wathersip down”, which features Andre Matos on one track. The album’s called “Rabbits’ Hill pt.1″ TRICK OR TREAT? Make your choice…

"The Unlocked Songs" - this is the title of the new work - falls in between an album of unreleased music and a collection of assorted goodies scattered over almost two decades of brilliant career.A compelling and amusing "b-sides greatest hits", "The Unlocked Songs" includes unreleased songs, remixes, covers, rare bonus-tracks, acoustic versions and demo tracks that will just make you feel better. The album highlights include a thrilling cover of the Misfits’ classic hit ‘Scream’ and the outstanding voice of the late, great Andre Matos in "Prince With a 1000 Enemies", which was originally released in 2012.Uplifting heavy metal for these dark times: Trick Or Treat are men on a mission and, most of all, men of their word.