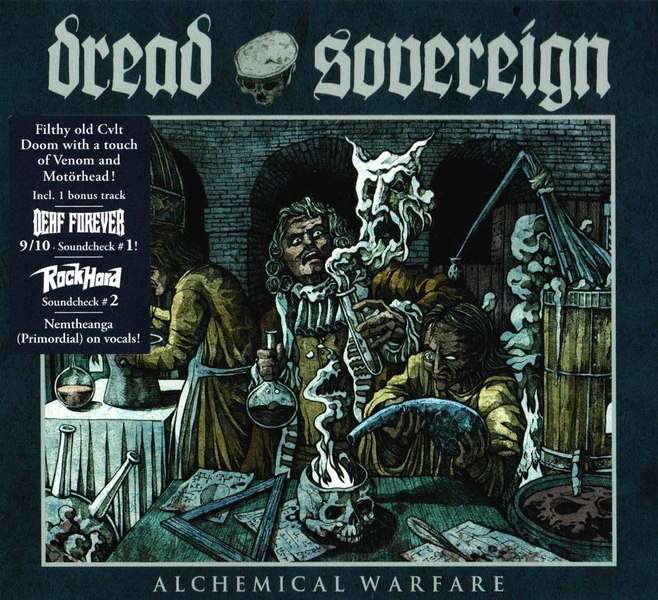 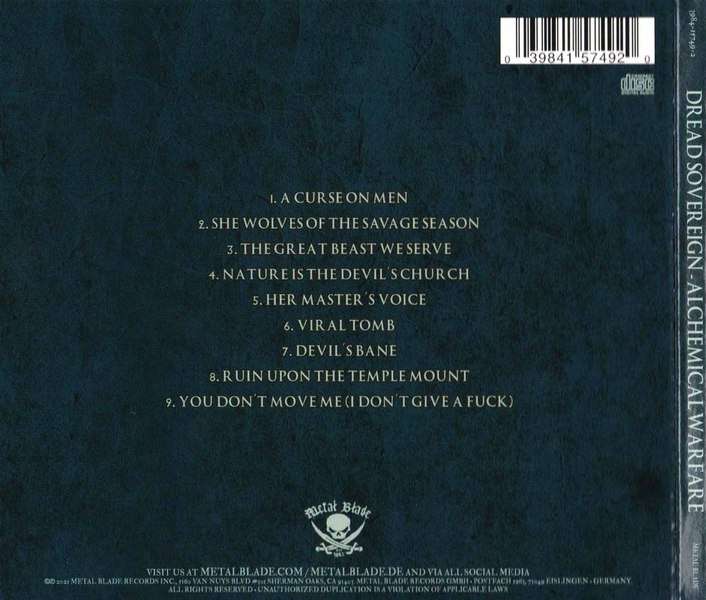 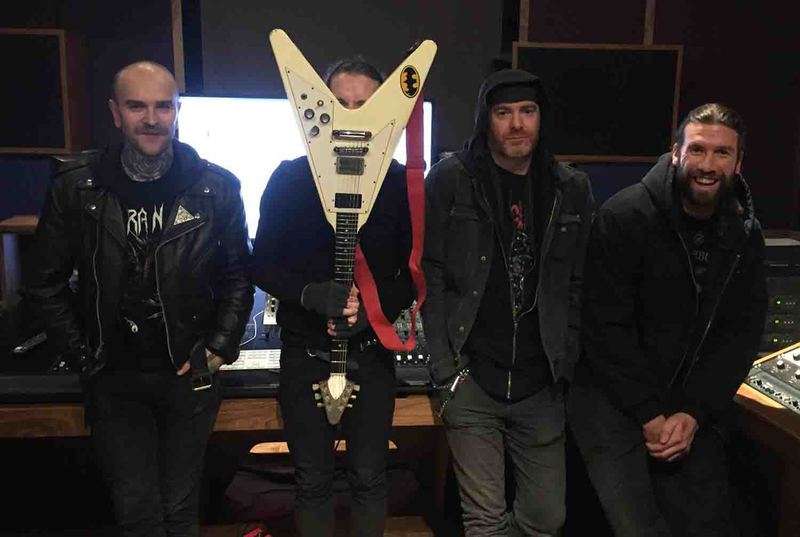 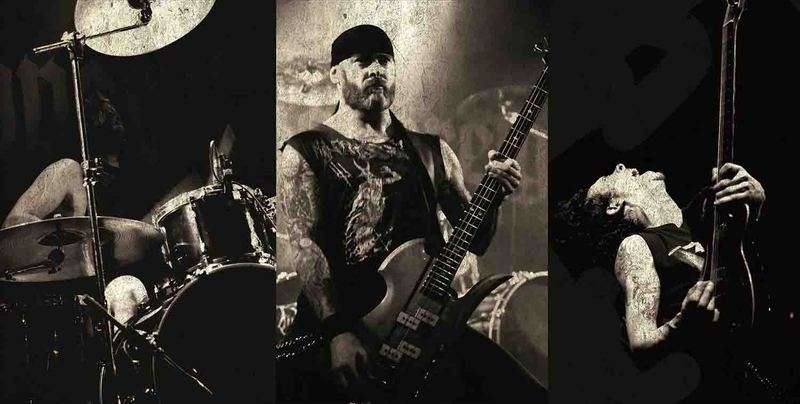 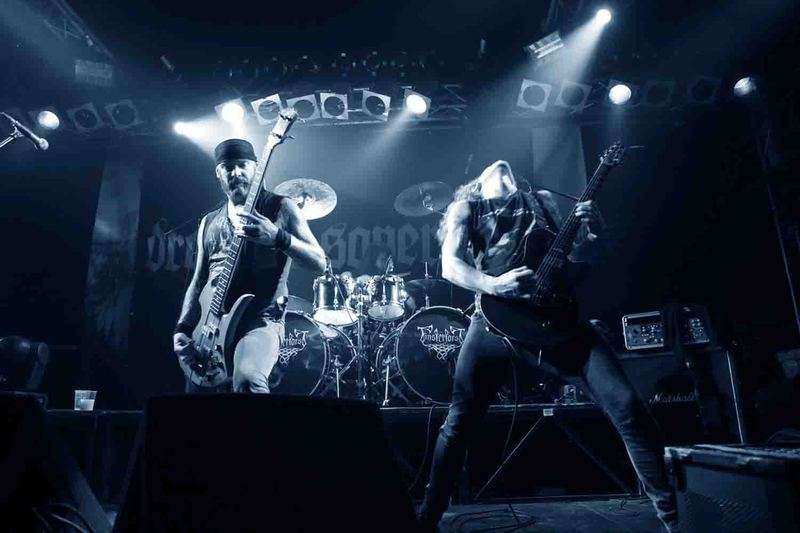 Dread Sovereign is the born dead brain child of Nemtheanga from Primordial. Years of string hacking and slashing on guitar have finally come to realization as backed by Dubh SOL on drums and Bones on guitar they have forged a new band. The blueprint is rough, raw old school doom / metal which hails of Venom, Saint Vitus, Cirith Ungol and touches of late 80s early sepulchral black metal.Dread Sovereign was formed in Dublin, Ireland in 2013 by Primordial vocalist Nemtheanga to give praise to filthy cult old doom, black and heavy metal. Their first EP - 2013's Pray to the Devil in Man - came out on Roadburn/Burning World Records to coincide with the band's live debut. Soon after, two full-lengths were released by Van Records: All Hell's Martyrs (2014) and For Doom the Bell Tolls (2017). And now, in early 2021, the band will release their new album, Alchemical Warfare, through Metal Blade Records."Our motto when we started was 'The World is Doomed'…and it seems life is imitating art…as we are looking like filthy prophets!" says vocalist/bassist Nemtheanga. "Several years in the making, the new Dread Sovereign is ready for the End of the World, which might be next year in case you didn't know! A bit more reckless and up-tempo than the previous releases, yet the template remains doom, 'Alchemical Warfare' just has a bit more Venom and Motorhead thrown into the mix. If it's the end of days we might as well go out with middle fingers raised right?"

Since bursting onto the scene in 2013 Dublin doom metal outfit DREAD SOVEREIGN have been making sure that the spirit and vigour of old school heavy metal is alive and kicking. It is now time for the trio to follow up on their 2017 release For Doom The Bell Tolls with third full length album Alchemical Warfare which is due for release on January 15th via Metal Blade Records. Will they be able to build on the solid foundations they have crafted thus far?This release commences with a short but spooky excerpt in the shape of A Curse On Me that puts you on edge with haunting screams and maniacal laughter before settling into the doom infused trudging riff work of She Wolves Of The Savage Season. The initial stages methodically plod along, plotting their attack which comes forth as the pace begins to build into a confident gallop alongside powerful vocal bellows. Stoner inspired grooves and melodies seep into proceedings to add some extra allure as the guitarist is allowed to roam free in a lengthy instrumental section layered with enticing lead pieces. The Great Beast We Serve continues with the upbeat vibe that oozes an anthemic vintage heavy metal tone guaranteed to get your head bopping along. An ideal choice for a single prior to the overall release.Nature Is The Devil’s Church dishes up an extensive, brooding introduction that leaves you pondering what may be lurking around the corner before welcoming you with a heightened energy and commanding drum work. Nemtheanga really knows how to grab a song by the scruff of the neck and lay his iconic stamp all over it. His vocal work instantly elevates the accompanying musicianship with his bursts of shriek-like falsetto. Additional instances of enthralling guitar work add the exclamation mark. Her Master’s Voice follows in similar footsteps to its predecessor, keeping you on your toes until chunky bass lines take the spotlight. The soundscape is very captivating, allowing you to get lost in the moment while the melodies swarm around you. The sheer vintage nature and charm of this piece could easily be mistaken for a track written in the 70s. Rather than focus on bells and whistles it is just a wholesome slab of no frills heavy metal which ticks all the right boxes.Viral Tomb offers up another brief and pretty minimalistic interlude which segues into some tasty riffing to open up Devil’s Bane. This track possesses a more evil, devilish vibe with strings of energetic drumming and downturned doom-laden grooves that are ridiculously addictive. Ruin Upon The Temple Mount keeps slowly ramping up the tension as it progresses and for some this may be deemed unnecessary considering the track doesn’t really hit its stride until almost halfway through. When it gets going the stomping riffs and imposing vocal work are undeniably engrossing. The addition of a cover of BATHORY‘s You Don’t Move Me (I Don’t Give A Fuck) injects a shot of adrenaline into your veins to end this journey on a surging high.Whilst the cohesion of the tracks as a unit may leave a point of contention there is absolutely no faulting the abundance of quality available throughout Alchemical Warfare. There are a wide variety of styles on display which keeps things refreshing and exciting as you work your way through. Some tracks have a tendency to be on the lengthy side which may put some listeners off but when the riffs hit, they hit hard and are worth sticking around for. Nemtheanga‘s vocal work is definitely the star of the show as his multi-faceted range runs riot and instantly enhances whatever it touches. A very impressive outing.