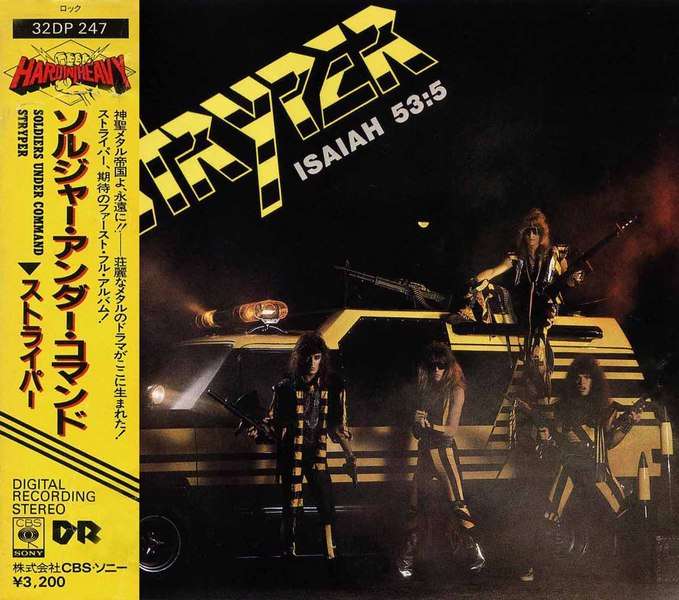 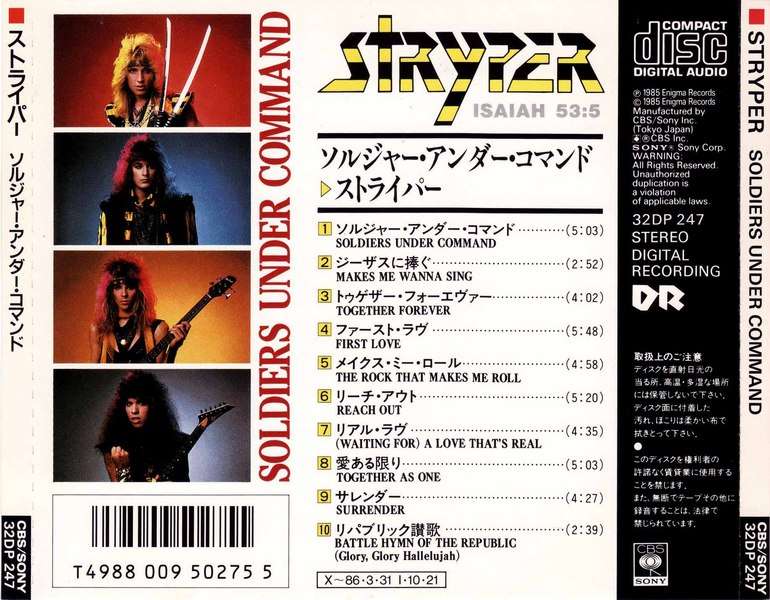 Soldiers Under Command is the second release, and first full-length studio album from Christian metal band Stryper, released in 1985.It was the first Christian metal album to achieve Gold record status, selling more than half a million copies.The album was originally issued on white vinyl. The Live in Japan in-concert video, released in 1986, was filmed on July 8, 1985 during Stryper's tour in support of this album.A music video of the title track was released.The inspirational verse for this album is 2 Timothy 2:3-4.Stryper’s sophomore full-length is heavier, faster and is higher quality than their debut. In the 80’s Stryper played a brand of Christian hair metal also combined with traditional metal and even some speed metal. Soldiers Under Command was were everything came together for Stryper’s sound, which would finely pay off and earn them a gold status and a platinum status on their third full-length To Hell With The Devil.The songs themselves are mainly up-tempo with a few mid-tempo songs and power ballads. Speed metal is represented in songs like the title track, The Rock That Makes Me Roll, and Surrender. The rest of the songs are a hybrid between the rocking hair metal and the more traditional metal of the 70’s. Most of the song choruses are well done, entertaining, and are based around the Christian values/beliefs of Stryper. The production is top notch mixing every instrument in the mix clearly and properly.Michael Sweet is an excellent vocalist with an incredibly high range especially when he pulls off his very high pitch falsettos. He is also a gifted rhythm guitar player and provides some nice riffs throughout Soldiers Under Command. Oz Fox lead guitar is highly underrated he plays many infectious leads, riffs, and highlights ever song with a fast entertaining solo. Tim Gaine’s bass guitar is audible but like most hair metal bands just provides the back bone to every song. His keyboard work is just for atmosphere and does its job well. Robert Sweet’s drum work is great providing ever song with some entertaining fills, drum rolls, and double kick bass.Soldiers Under Command does have its flaws fortunately they are few. The ballads and power ballads are cheesy and sometimes even annoying fortunately there are only two present. As said before the bass only provides the back bone for Soldiers under Command but still lacks as much heaviness as To Hell With The Devil and Against The Law. Finally most of the songs on Soldiers Under Command could have used another riff just for the sake of each song being a bit repetitive.Soldiers Under Command is usually overlooked considering it came right before Stryper’s platinum release To Hell With The Devil. Best songs are the title track, Makes Me Wanna Sing, The Rock That Makes Me Roll, (Waiting For) A Love That’s Real, and Surrender. I highly recommend this release to any fan of Stryper traditional metal and hair metal.-5 points cheesy and annoying power ballads -3 points lighter than To Hell With The Devil and Against The Law -2 points a few more riffs to each song would have taken away from the repetitiveness factor.