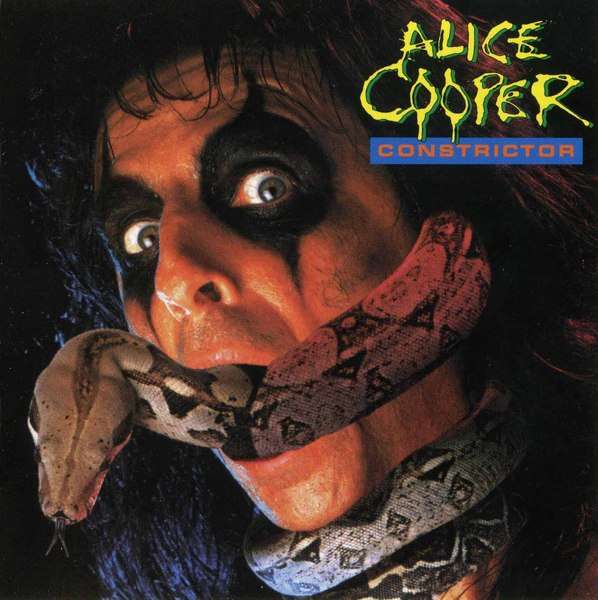 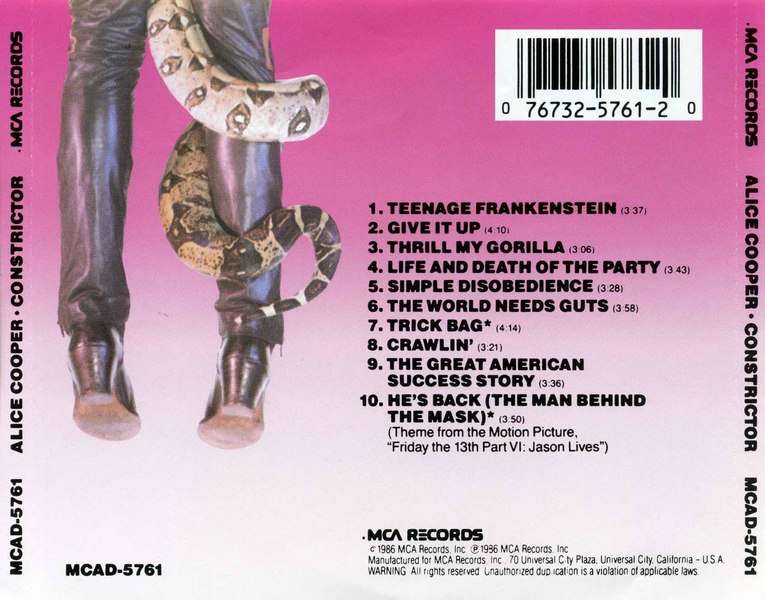 Constrictor is the ninth solo studio album by rock musician Alice Cooper released on September 22, 1986.After a hiatus from the music industry after the release of DaDa, Cooper remained in seclusion for three years. He starred in Monster Dog, a horror film for which he wrote two songs. He also guest starred on the Twisted Sister track "Be Chrool to Your Scuel". Constrictor was Alice Cooper's first album to feature Kane Roberts on guitar, Kip Winger on bass, who would later gain great fame with his own band, Winger and the only one to feature David Rosenberg on drums.The album returned Cooper to the charts at number 59 after his previous two releases Zipper Catches Skin and DaDa had failed to crack the Top 200.For all intents and purposes, Constrictor was the first "normal" album Cooper had released in nearly eight years, since his records following From the Inside were seen as largely experimental.The horror series Friday the 13th teamed up with Cooper during this time to produce the theme song for its latest film. The song “He's Back (The Man Behind the Mask)” was written for Friday the 13th Part VI: Jason Lives and went on to become a #1 hit in Sweden. Also featured in the film were Constrictor’s “Teenage Frankenstein” and “Hard Rock Summer,” which did not end up on the album.The track “The Great American Success Story” was apparently intended as the theme song to the Rodney Dangerfield film Back to School, but was not actually used.The demo of “He’s Back (The Man Behind the Mask)” was totally different from the final album version. A reworked version of the “He's Back” demo landed on the album as “Trick Bag” instead. The version of “He’s Back” that was featured in Friday the 13th Part VI: Jason Lives was remixed from the album version.Constrictor also led to one of the most successful tours of the late 1980s, “The Nightmare Returns” tour. Three songs from the album, “Teenage Frankenstein”, “Give It Up” and “The World Needs Guts” were regularly performed on this tour.However, as with all Cooper live songs since Lace and Whiskey, these songs failed to remain in the setlist during subsequent tours. “Teenage Frankenstein” was also played on the tour supporting the follow-up Raise Your Fist and Yell album and occasionally during the 2001 “Descent into Dragontown” tour,whilst “He’s Back (The Man Behind the Mask)” was played occasionally in the late 1980s and the early 2000s before becoming a frequent part of the setlist on the “Raise the Dead” tour.