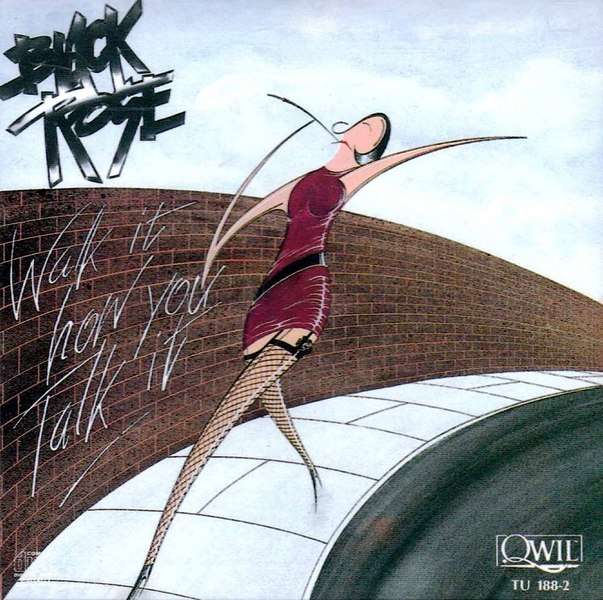 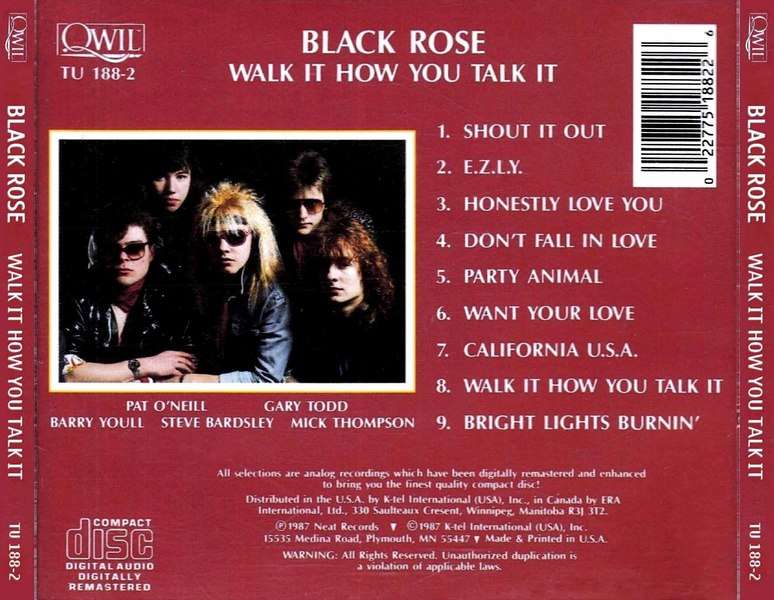 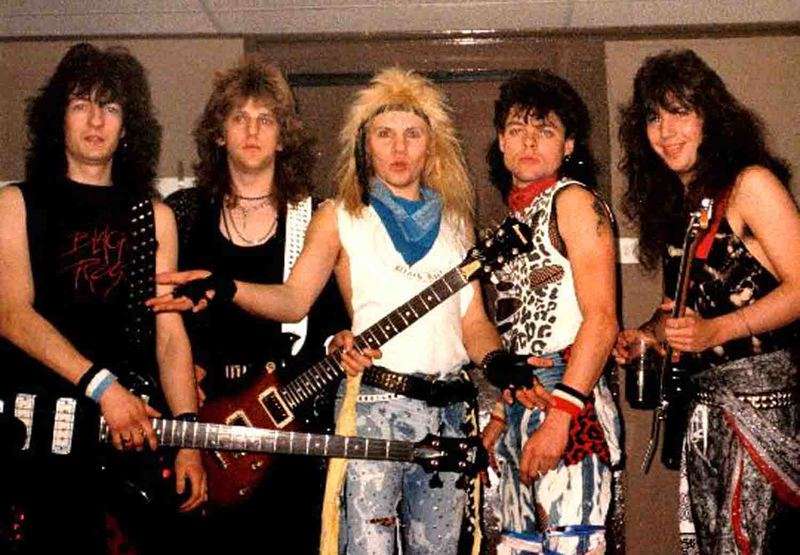 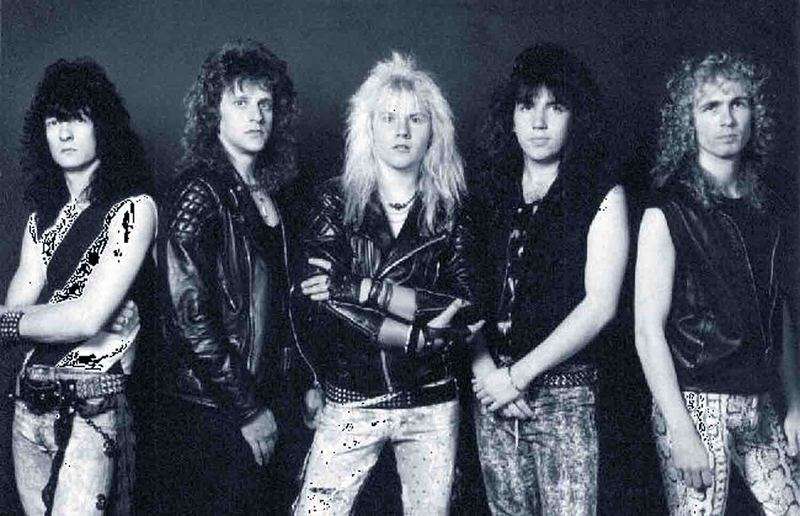 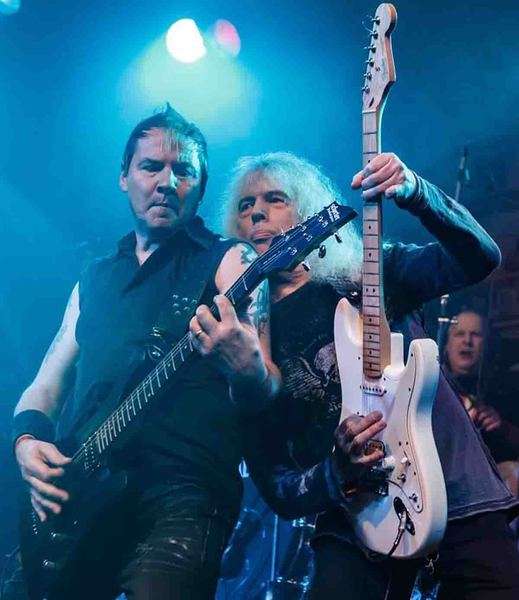 Black Rose are an English heavy metal band from Teesside in the north east of England.They formed in 1976 under the name Ice but changed it to Black Rose in 1980 and were one of many British bands considered part of the new wave of British heavy metal movement. The original line-up was Steve Bardsley (lead vocals/guitar), Kenny Nicholson (guitar), Marty Rajn (bass) and Mark Eason (drums). Over the next nine years the band went through various line-up changes and released quite a few records including two albums: Boys Will Be Boys (1984) and Walk It How You Talk It (1986) before splitting up in 1989.The band then re-formed in 2006 and released their newest album Cure for Your Disease in 2010.Black Rose started out as Ice back in 1976 when three friends from a School in Saltburn by the Sea decided to form a rock band. The three guys were Steve Bardsley, Marty Rajn and Mark Eason who soon became a four piece after they saw guitarist Kenny Nicholson playing in a local pub and asked him if he wanted to join up with them. Eason left the band citing musical differences and local drummer Charlie Mack was drafted in. As this line-up they recorded their first demo tape at Impulse Studios in Wallsend Newcastle, the home of independent record label Neat Records, which consisted of five songs: "Alright On The Night", "Biker", "Killer", "Loveshock" and "Raising Hell". The demo was picked up by various rock disco playlists,[citation needed] and featured in the local charts section of the British rock magazine Kerrang!.Nicholson and Mack both left the band to pursue others ventures, Mack joined Emerson and then ended up in Samson and Nicholson went on to form both Holland and Fast Kutz.New guitarist Chris "wahwah" Watson and drummer Mal Smith then joined the band and they released their first single on the Teesbeat label called "No Point Runnin'". Rajn fell out with the rest of the band over various issues and departed, making way for another bass player Mick Thompson to step in. This went on to be probably the most stable line-up of the band, recording and releasing an array of songs including their début album Boys Will Be Boys and featuring on a variety of compilation records. The band toured all over the UK and Europe playing alongside established bands including Raven, Terraplane, Budgie, Trust, Vardis, Atomic Rooster, Pretty Maids and Spider, and gathered a worldwide fanbase having fan clubs in Europe, Japan and the United States.By the mid 1980s, they were also joined by guitar and keyboard player Gary Todd and major record labels Atlantic Records and Bronze Records both showed some interest in the band but neither signed them up to any deal so Watson got a bit disillusioned and left, making way for the guitarist Pat O'Neil. This line-up recorded the band's second album Walk It How You Talk It released by Neat Records which saw them recording slightly more melodic songs. This album was also picked up by AJK, a subsidiary of K-tel in the United States where it was repackaged and ready to be released independently, but because of a dispute over copyrights with a US band of the same name the record was not issued. This was to be the beginning of the end for the band and although they recorded some more material nothing was released and they split up in 1989.In 2006 Bardsley, after speaking to Watson, decided to write some new material together and Black Rose were born again. British indie rock label Majestic Rock Records released a CD of the band's songs from 1980–89 called Bright Lights Burnin' and, in 2010, the band released their third album Cure for Your Disease as an independent download-only release.A new line-up was put together and the band played their first gig in 25 years at the Cradle Will Rock festival in Shildon, County Durham. In 2012, they were invited to play at Hammerfest lV and also at the Headbangers Open Air festival in Germany.The band also released three new albums on German record labels.

I think I should start this review by addressing an old theory that said: “When British people start playing melodic Hard Rock, they do it better than the Americans”. Regardless of whether this is the case or not, I can safely admit that albums like the second full length of the British Black Rose are the main cause of theexistence of such theories.Founded in 1976 in Cleveland and after 4 years under the moniker Ice, they entered the 80’s with furious attitude –as Black Rose – changing their name and – several times –their lineup, recording – among others – theirself-titled EP and the “Boys will Be Boys” debut with Bullet, eventually ending in the welcoming Neat, which would release the band’s second album “Walk It How You Talk It” and the “Nightmare” EP, recordings with which the band will reach 1989,time whenultimately they disbanded.In ‘Walk It How You Talk It’, which was released in 1987, the band essentially concludes what it had already begun with its debut: A conscious turn to the American melodic Hard Rock / Metal sound with the necessary glam strokes.This turn is of course perceived mainly by those who are in touch with the – interesting – recordings of the band before its debut –in which they engage with this rough N.W.O.B.H.M. sound, a trademark for a big part of the English Metal scene in the early 80’s. However, things in their two full lengths – and especially in the second – are quite different.So, we reach the band’s second album and the passport for the US has already been released, with Black Rose playing this kind of catcy hard rock / metal, with dynamic and glamorous melodies, which were already reaching great levels in the U.S.The result is excellent and the album is delightful. It’s a full – hearing experience and when the last track is over, the finger goes back to hit the play button spontaneously. Dynamic and straight to the point guitar themes that serve the purpose of the material, to engrave themselves in your mind that is (E.Z.L.Y.). The keyboards, give a more delicate texture to the ultimate sonic result (Honestly Love You, Don’t Fall In Love), catchy choruses (Keep The Bright Light Burning) are the key ingredients here. The band also manages to master even that sonic explosion we meet in “Walk It How You Talk It”, a track in which speed is faster. They manifest that metal heritage to their forefront. Listening to the track ‘our’ Douglas came to mind, who at the same time produced their own “State Of Rock” a mainly melodic Hard Rock album, but they also left room for that Heavy Metal Dynamite called “Dogs Of War”. And because I can actually listen to my chief editor mumbling that I’m drifting away from my main subject, I return to Black Rose to say that in this re-release by Lost Realm Records that I hold in my hands, there is the “Nightmare” EP asa bonus, for which a talked earlier.“Nightmare” was released via Neat two years before “Walk It …”, in 1985 that is. In the four tracks that make up the EP material, the band leaves its N.W.O.B.H.M.’s heritage to go a little further in the limelight – listen to the introduction and generally the whole set up of the homonymous piece and you will understand exactly what I mean. Of course, the scent of American glam is here – especially in the next 3 tracks – but that doesn’t stop you from listening to “Nightmare” at the end 3-4 times on repeat offering joy to the neighbors.In short, with the re-circulation of Lost Realm, we have in our hands the entire – short but very fertile – period of those English bastardsduring the Neat-era. The entire second album of 1987 and the 1985 EP, are the best examples of their composition talent.The package also complements a vibrant DVD with a live appearance of the band from the mid-1980s.Black Rose will return to active action in 2003, they will write another record in 2010 and will make sure to re-release their 80s material through several collections or complete re-releases such as this one marking the 30th anniversary of the release of the second and their greatest album.