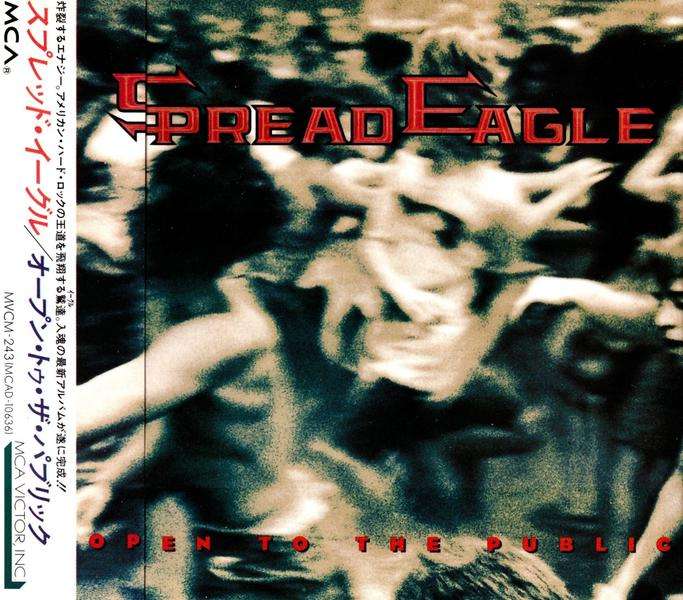 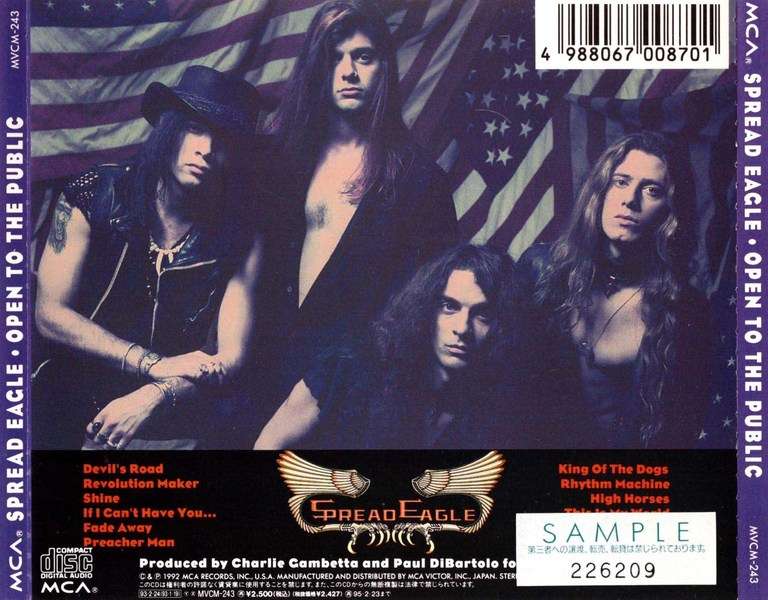 Spread Eagle is an American hard rock band from New York City. After only a few months of rehearsal they were signed by MCA/Universal Records. They released two albums Spread Eagle (1990) and Open To The Public (1993) and disbanded in 1995.In 2006 the band reunited.In January 2011 the band officially announced their new line-up and according to bassist and founding member Rob De Luca there are plans for touring in North America and Europe.In the late 1980s, founding members Paul DiBartolo, Rob De Luca and Tommi Gallo were playing in a Boston based band called Bang.In 1989 guitarist Paul Di Bartolo (real name Salvadore Poe) traveled to New York where he met singer Ray West. Paul was so impressed by his voice, that he immediately convinced bassist Rob De Luca and drummer Tommi Gallo to follow him to New York and start a new band with Ray which became Spread Eagle.After only a few months of rehearsing they signed with MCA/Universal Records.As they were signed while still rehearsing for their first gig, they wrote most songs for their debut 1990 debut album Spread Eagle in the studio. Receiving little promotion from MCA the band produced the video for "Scratch Like A Cat" using their own money and with the help of friends.The band spent a lot of time on the road before recording their follow-up album and began burning out. First to leave was drummer Tommi Gallo. He was replaced by Kirke Blankenship who did not stay for long and played drums on one track (High Horses) of the second album Open To The Public. That album was then recorded with session drummers John Macaluso from TNT and Thommy Price from Joan Jett and the Blackhearts.Open to the Public was released in 1993. Dave Femia played the drums on the following tour.[7] The new record did not meet the expectations of their fans and Grunge took over the music scene. So in 1995 Spread Eagle resigned and split up.Ray West turned his back to music business for a while. He is singing in a band called All Pointz West or shortly APW.Paul DiBartolo changed his name to Salvadore Poe after writing and recording songs for Swedish singer Lisa Ekdahl who was his wife at that time. He is fascinated by Indian culture and spends much of his time there.Rob De Luca started a new band called Ouijipig,later another one called OF EARTH.He's also worked as studio bassist and touring bassist for many bands including UFO, Sebastian Bach, Joan Jett and the Blackhearts, Helmet and George Lynch.There is nothing known about Tommi Gallo, a former member of the bands Iron Rage and Bang, since he left Spread Eagle.In 2006 Rob De Luca and Ray West started Spread Eagle again.Their debut album which had been out of print for over 10 years was remastered and re-released by the small independent label Lovember Records. They started touring in 2006 with Chris Caffery on guitar and John Macaluso on drums.Due to basically everybody being busy touring with other bands, there were only a few shows.They found new guitarist Dennis Kimak and Rob De Luca returned to New York from touring with Sebastian Bach and UFO. In December 2010 they started touring the Northeast of America. Their debut album was recently voted as one of the top 20 glam albums of all time (along with Guns N' Roses, Mötley Crüe, Hanoi Rocks and Skid Row):In 2012 guitarist Dennis Kimak quit and was replaced by Ziv Shalev who played the first 2 shows with Spread Eagle in December 2012.

SPREAD EAGLE second album “Open To The Public” in its Japanese Edition including a bonus track. While most melodic hard rock bands circa 1993 were already drop by their major record labels (especially in America), SPREAD EAGLE managed to release this second album via MCA.SPREAD EAGLE’s self-titled resulted a cracking platter of hard rock, and this second effort “Open To The Public” is just as good as the first. Obviously with a more notorious early ’90s sound to it, the songwriting inspiration still is firmly planted in the Eighties.Indeed, kudos to SPREAD EAGLE; they never caved in to the grunge movement, instead, the songs on “Open To The Public” are driven by crunchy sharp guitars, pounding drums and the gritty vocals / gang choruses which are the trademark of traditional US melodic hard.