Discreation - Procreation Of The Wretched (2015) 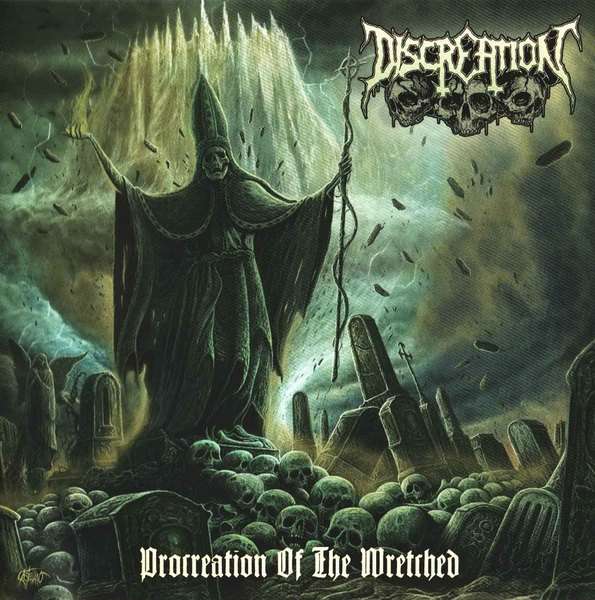 Shortly after Peter Frick and Sebastian Schilling founded the band, they organized their first indoor-festival in 2001. 300 visitors of the first “Schlachtfest” made up an impressive scenery for Discreation`s live debut. Following this first concert the band played various shows in support of acts like Amon Amarth and Die Apokalyptischen Reiter. In September 2003 Discreation released their first studio recording: the EP entitled “The Great Curse”. The most encouraging press reactions helped to play numerous shows, often in support for bands like The Crown, Agathodaimon and Belphegor.The guys in Discreation went into the recording studio again only one year later in 2004. The full-length record “Order To Advance” was released in February 2005. Again, the album was received overwhelmingly well by the press: “Order To Advance” is a thoroughly professional and felicitous work without any let-downs. “Its heaviness and groove sticks in your mind long after listening.” That was the conclusion of the album review in the 36th issue of Germanys Legacy Magazine.In September 2006 „Order To Advance“ was re-released by a small label that offered distribution in Germany, Austria and Switzerland. To increase the value of this release the CD came out as digipak with the remastered EP “The Great Curse” as bonus material. As additional special feature the two original booklets of “Order To Advance” and “The Great Curse” are enclosed in the digipak. The media was enthusiastic again. Powermetal.de asked: “Brutal, melodic, yet suitable for moshing, could a Death Metal fan ask for more?”“Withstand Temptation“, the previous full-length album, was released via SAOL/H’Art in 2010 and provoked euphoric responses as well: 6 out of 7 points in Metal Hammer Germany, 8 out of 10 points in Rock Hard as well as position 7 in Legacy Soundcheck and 13 points out of 15 do not need any explanation. “To those who haven’t dug it yet: This is a compulsory purchase for each and every Death Metal maniac.” (Jan Fleckhaus, Metal Hammer Germany).The free, digital EP “Plague and Fire“ was the previous Discreation release in 2011. Mixed and mastered by Jörg Uken (God Dethroned, Dew-Scented among others) this release stirred up enthusiastic responses: “These three songs show the band’s extremely wide variety and easily pee over the gargling and grunting monotony you are served on a weekly basis – in Germany as well as elsewhere.” (Andreas Schiffmann, musikreviews.de).October 2013 marks the release of DISCREATIONS third album „The Silence of The Gods“. The band has found the ideal partner in Remission Records, who have gained a reputation for excellent Death Metal releases within the scene. “The Silence of The Gods“ wins the listeners over with the band’s self-contained approach and its remarkable variety. The release was refined by the first-rate producer Jörg Uken and enriched by the epic artwork of Juanjo Castellano.

FDA Rekotz surprised in the last months with some very exciting releases when it comes to death metal. Chapel Of Disease and Weak Aside are just two of those bands that published thrilling CD's during the last months.In May there are two more of those excellent records waiting to be shipped to the record stores. Next to Revolting (see review) it is German Discreation that has a new longplayer in the pipline. The five-piece band from Hanau has ten new death metal bullets waiting to be fired right into your ear-channel.The main pillars behind the band are bassist Peter Frick and sixstringer Sebastian Schilling; both being part of the band from the beginning. And also Kai Mueller-Lenz on vocals is already in the band for many years.If I compare the new record with the earlier ones the sound became more menacing and dark; reflected also in a new logo of the band.What I like with "Procreation of the wretched" is the diversity the band delivers with the ten tunes. They easily keep the tension high throughout "Procreation of the wretched".My personal fave on the album is the partly slower kept "Corporate hatred". The riff is a mighty one and the slower pace in the beginning increases the intesity of the track. The first third is a grooving one before the pace increases again which makes the track an irresistable listening experience.Another great anthem on the record is "Megacorpse". It's a highspeed train on a merciless journey that cumulates in the 'megacorpse' chorus growls. "Your good shelter" is another piece that stands out. The track finds the right mix between speed and a galloping rhythm that is the base for the tune. It's a crispy death metal number that belongs to the highlights on Discreation's fourth album."Procreation of the wretched" shows that oldschool death metal can be also put into a contemporary setup. Merging American death metal with the European roots ended up in an album that is honest, fresh and kick-ass. Something to recommend.